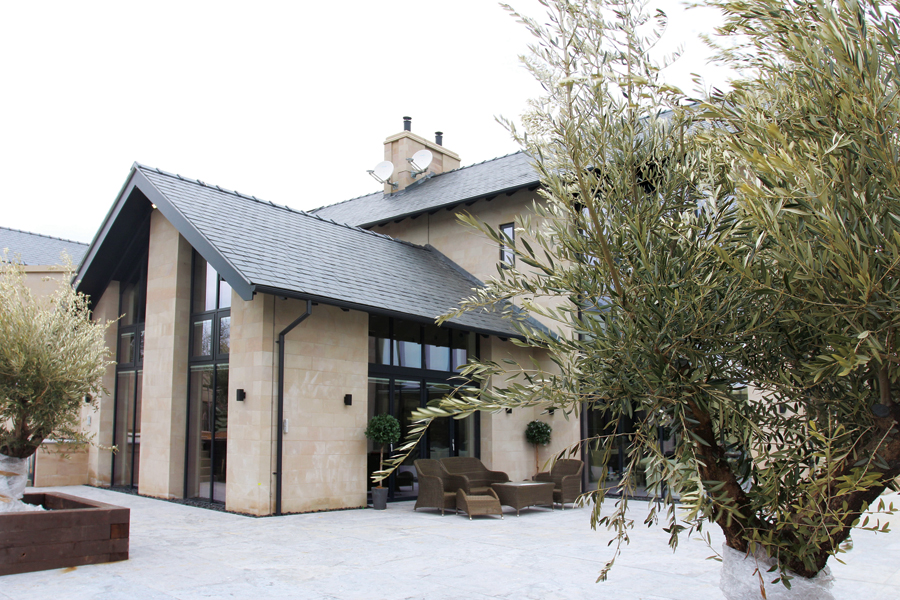 A stunning new home in Derby benefits from the latest in home control and automation technology.

The owner of this family home is himself a tech specialist and runs a number of technology companies. Therefore, when undertaking the building of his beautiful home in Derby, there were two crucial elements on his wish-list. Firstly, a complete, end-to-end, room-to-room control system that would allow everything from channel-surfing to central-heating to be operated at the touch of a button, and secondly, he would personally test all equipment to ensure the best energy-saving components were used throughout.

A Crestron solution takes care of the first element and integrators from home automation expert Custom Controls have incorporated the home’s audio, video, heating and lighting into a single, easy to use system that is accessible by the entire family. In fact, the owner’s desire for a whole-home control system exceeds his brief and takes the tech outside, even being able to control the heated driveway and security system.

“This is the fullest integration possible,” says Custom Control’s Dave Chester. “We had the luxury of being involved with this project from very early on and that is enormously beneficial when owners are looking at sourcing cutting-edge home technology. Working with the architect allows us, as the technology integrator, to keep all the wiring cleverly hidden behind walls and we can incorporate access points and switches for lighting and touch screens into the design of the home. This is all really beneficial in terms of the finished aesthetic and interior design, it means homeowners can have the best technology without disturbing the look of the property.”

The owner’s second point on his shopping list – testing equipment to ensure suitable energy-saving credentials – was most evident when deciding on his light fittings. Not content with following his architect’s preferred supplier, the owner decided to source and test a number of light fittings before deciding on which brands were to be used. The test procedure included a detailed analysis of consumption and performance, including energy used, colour and dimming capabilities.

LED was the only choice for a property with this type of green-conscience and the winner of the lamp-off was the CLED range from Crestron.

Dave explains: “During the early stages of the build, the home was running on generator power while we waited for a mains hook up. It was calculated that the generator would need refilling every two days, based on using the lights that were originally suggested. With all the newly sourced lamps on – over 400 in total – our generator ran for 12 straight days.”

Further to the energy efficiency of the light fittings, the scene setting process is also incredibly efficient. Each touch screen in the home, and the connected iPads via the control app, can select a number of preset light scenes. The touch screens all feature the plan of the room overlaid with the lighting plan so setting scenes is intuitive and easy for the entire family. Furthermore, if an existing scene requires tweaking then any of the family members can dim or brighten the lights and then save the new scene for future use.

Energy saving across the home and outside areas is optimised through a network of sensors that detect movement. This allows lights to switch themselves off when there is nobody in that room. After all, even the most efficient lights are greener when switched off.

Earlier this year the house received a large security update. The owner had added new security features that needed to be added to the system, including gate interface changes and creating a security specific control panel for the security office.

As the family explains: “The home was a large self-build, so as family have settled in, over the last year or so, they have asked for further customisation of the system – the reason we design and install Crestron is the flexibility – anything is possible.

“A good example is the gate interface – as a default every touch panel in the home has access to the intercom system – someone arrives at the gate and every panel rings and allows two way communication, with gate release if required. Despite a total of 11 touch panels being installed in the property, the homeowners found they were missing visitors whilst they were out on the estate – walking the dogs for example. The new system therefore texts them when the gate intercom is pressed, allowing them to visit their closest panel or go on the app on the mobile to open.”

The second update was to create a security specific control panel for the security office – IP cameras are embedded on to a map of the property allowing complete PTZ control in addition to full control of outside lighting. Custom Control have even utilised the speakers in the garden to allow local security and a remote monitoring station to talk to anyone in the garden. The outside space is also programmed as an intercom zone, so in addition to being able to page between rooms inside the home, the homeowners can page outside – great if a visitor calls when they are relaxing by the pool.

Even with the most exclusive AV equipment, automated heating and security, it is the lighting in this home that showcases its architecture and beautiful interior design. The partnership between the architect and Custom Controls has resulted in the perfect integration between technology and design and this is achieved by incorporating a strong, eco-friendly conscience. It’s a great example of how technology in new-builds is about investing in the environment, as well as enjoyment of the space for years to come.

More in this category: « Perfecting your dream interior finish Take your heating into the trenches »
Login to post comments
back to top