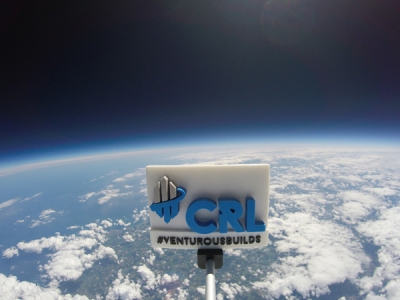 An inspiring new web series that showcases Britain’s most extraordinary people and their construction achievements has been revealed by CRL.

The structural defects insurance specialist has launched its pioneering new web series by going where no other insurance expert has gone before and sending their logo into space.

The space launch, which can be viewed on CRL’s You Tube channel, aims to inspire the fellow venturous, brave and unorthodox to share the details of their venturous builds with CRL for a chance to have their project featured on the online show.

The filming of these unique projects will take place over the summer months, with the first episode of Venturous Builds going live early Autumn, hosted by English designer and regeneration expert Wayne Hemingway.

He got an MBE in the Queen’s Birthday Honours list of 2006, is a professor in The Built Environment Department of Northumbria University, a Doctor of Design at Wolverhampton, Lancaster and Stafford, and a Fellow of Blackburn College and Regents University.

A writer for architectural and housing publications and a TV design commentator, Wayne also judges international design competitions, including the regeneration of Byker in Newcastle and Salford in Greater Manchester, the The Royal Institute of British Architects Stirling Prize and Europan.

CRL chief executive Steve Mansour said: “CRL is looking for the one-offs, the inspiring, the ingenious construction projects to feature in our Venturous Builds web series.

“If you’re the person who is courageous enough to think outside the box then we would love to hear what makes your project remarkable.

“We are looking for those who have approached their project in a unique or imaginative way – not just those with interesting or unusual buildings.

“We are delighted to have secured Wayne Hemingway as the host for Venturous Builds. Wayne’s commitment to innovation really embodies the spirit of CRL and our new web series.

“We recognise that every opportunity is different. With CRL there are no tick boxes and no set criteria – just an appetite for adventure.”

Share your plans with CRL at www.c-r-l.com/venturousbuilds for a chance to be featured in this inspiring new web series. If your project is featured you’ll be treated to a £1000 worth of interior design vouchers.

More in this category: « 5 effective steps to adding value to your home; Whether moving or staying put Scotframe - leading the way in self-build »
Login to post comments
back to top