A touch of class by Quayside Conservatories 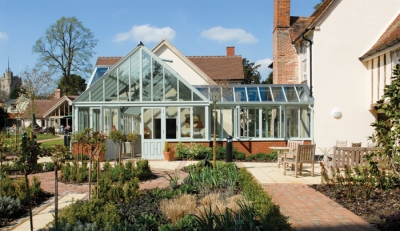 Quayside Conservatories have been creating hardwood conservatories for the trade and general public for nearly twenty years. A modest team of craftsmen, working from a disused boatyard on the banks of the river Waveney ensure that the products they loving create and install are of the highest quality.

Devonshire House and its’ Quayside Conservatory.

First called ‘The Forgotten Allies Trust’, the Sue Ryder Foundation was established in 1953. A small legacy left to Sue Ryder by a Suffolk housewife, enabled her to obtain a bank loan to convert her mother’s house in Cavendish, Suffolk into a home for 40 disabled people and refugees from Europe. In 1959 Sue Ryder married group captain Leonard Cheshire VC whom she had met 4 years earlier through charity work. After their marriage they set up the Ryder-Cheshire Foundation, which is still going strong internationally today. For many years, whilst establishing care homes and support centres worldwide their home along with their 2 children (Elizabeth and Jeromy was a few small rooms at Ryder Headquarters, Cavendish (source www.eulogymagazine.co.uk/articles).

The buildings having been disused since 2002 had fallen into a dilapidated state. They were purchased by auction in November 2007 and after a year securing various permissions reconstruction work began in summer 2009 and was completed in July 2010 to create a sensitively restored building.

Devonshire House today, a beautiful elderly care centre. Devonshire House is a regeneration of the old Sue Ryder Foundations charity headquarters and the Leonard Cheshire nursing homes, Cavendish, Suffolk. It was formed from the amalgamation of the timber framed Old Rectory, dating to 16th century and purchased by the Ryder family in 1946 which subsequently benefited from numerous later extensions. The semi-detached bungalows ‘The Mulberries’, plus a detached bungalow, (formerly housing museum and tea rooms) have been connected to the Old Rectory via a beautiful new hardwood conservatory, created and installed by Quayside Conservatories of Beccles.

We are proud of what we create so that you can be proud to own it. Completely bespoke, totally Quayside.