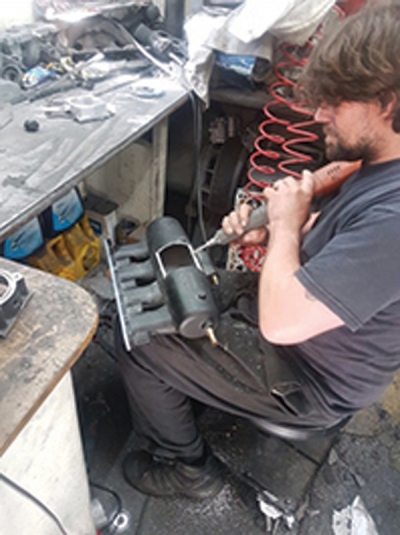 Price can be a sticking point for many end-users before taking the plunge to buy a FEIN power tool, especially after having used competitor machines for months or years beforehand. JP Schoonbrood, owner of an automotive tuning/machining workshop recently debated whether or not he should invest in a FEIN straight grinder. Having already used no less than 4 different branded straight grinders he recently signed up to test the FEIN one, putting the machine through its paces with heavy duty applications. Did it make the standard?

Despite having used so many machines, JP struggled to find a straight grinder that could deliver 8-10 hours work a day of continuous use, without needing to repair it or replace parts in the working week. He uses the machine for modifying car engines, in particular the cylinder heads: opening up, re-profiling and polishing the ports for a range of customers who are seeking more power and overall performance from the engine. For the grinding process, JP needs considerable power from the machine’s engine to remove metal efficiently, variable speed for different cutters and materials, a strong grip to control the tool and, crucially, a strong and secure collet to hold the piece in place.

When it comes to polishing and finishing the ports, the last two properties become even more crucial as JP moves the machine from a two-handed, waist level position to his shoulder, essentially using the grinder in the same way you would a large pen. This enables him to manoeuvre the machine where he needs to grind, while also allowing for a better view as he does it. When JP starts work on any cylinder head, he likes to complete it within one continuous period, making the durability of the machine essential. It is usually at this point, with a number of work days still to complete that a machine will experience difficulties under the sheer stress of continuous use. “The first point of failure is normally the main shaft bearings from side load or the collets from the continuous changing of cutters,” JP commented.

Following his tests with the FEIN tool, JP said, “I deliberately planned in a couple of weeks’ work, specifically trying to get a good mix of aluminium, cast grey and cast stainless heads and manifolds to work on. I hoped that the FEIN machine would last longer than others I had used, and deliver what I needed. I expected the grinder to join the tool grave yard under my workbench before the first week was out but I was shocked to find that the machine lasted me through both weeks without issue, and I have used it at various points in the weeks since.”

“It was not just the durability of the machine that I was impressed with. The weight ratio of the machine was superb, which really helped when I was grinding one handed for more intricate work. I found I was putting significantly less strain on my wrist as I manoeuvred the tool using its natural balance point. The air ventilation through the side of the machine was another relief, especially for my gloved hands, a feature I think is unique to this grinder. Other models I've used in the past vent towards the nose and end up burning your hands as the unit gets hot under heavy load.

“The automatic speed to load compensation was a welcome addition for the uniform finishes required in my line of work, something I had not personally come across before. Coupled with an overload protection that doubles nicely as a safety cut off, it actually saved my skin when I got one of the sanding cartridge rolls caught in my clothing. I did not know about the feature but was relieved when I wasn’t burned because the machine came to an instant halt when it caught me while it was operating at 12000 RPM,” he added.

“Overall I am left very impressed by the tool. Despite my misgivings about the machine’s price tag, it has saved me time in terms of repair and its durability throughout the weeks. It has more than earned its value back in my eyes. It has now become a regular grinder in the workshop. I tell a lie, it has become the main grinder in the shop and something I strongly recommend to my colleagues.”

FEIN offers 10 machines within its range of straight grinders. The GSZ 280-8 PEL delivers 410W output, with variable speeds ranging from 8500 - 28,000 RPM. The machine has an SSP of £478. Please check out https://fein.com/en_uk/standard-frequency-grinding/straight-grinders/ to find out more information.

More in this category: « The Wonderful World of Living Listed Property Show increases free access to conservation specialists in response to falling numbers of experts within local authorities »
Login to post comments
back to top