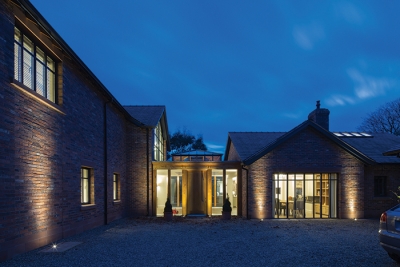 Woodeaves is a new-build residential project designed for family living. Having previously lived in a dark 1970s mock Tudor house with many separate rooms, when considering the design of their new house they put ‘light and bright’ right at the top of their agenda.

The house is oriented to the south west, and features a number of large social spaces including an the open plan kitchen living area and a two storey basement that houses a pool, Jacuzzi, gym and sauna. Sunlight floods in through large windows a creating bright, warm feeling. The artificial lighting is designed to maintain this feeling as darkness falls, bringing the best architectural features to the fore, while the equipment remains inconspicuous, and uses as little power as possible.

The house is designed to sit easily in its surroundings, with materials such as Cheshire brick, raw oak, grey slate and red sandstone all typical of the area. While large and modern, the interiors are carefully designed so that they retain a sense of warmth, enhanced by the layered approach to the lighting design. The brief also called for the house to be as efficient as possible, which has been achieved by using the best quality insulation, a ground source heat pump, quality LED light fixtures from acdc, and well considered lighting controls.

Louise Woodfield, the interior designer, set out to use the lighting to showcase the most beautiful features of the house. Internally, Louise began with a base layer of acdc STORM architectural downlights, supplementing these with wall lights and table lamps for ambient light. Concealed coves and troughs containing acdc BLADE linear LED fittings create an even glow of light to highlight feature ceilings, and acdc ELECTRA wallwasher type fittings are positioned to highlight selected features.

She explains: “Some of my favourite details are the acdc ELECTRA fittings that highlight the oak posts in the open hallway, and the acdc BLADE fittings that are concealed in a cove detail, washing light up the vaulted ceilings in the open plan living space. I was also especially pleased with the acdc STORM downlights that we used in almost every room of the house. These provide just the right light level and consistent warm colour temperature, and most importantly are very inconspicuous.”

To manage all of the different lighting types, an intelligent lighting control system was put in place creating a number of pre-set scenes throughout the house.

Outside, grazing light highlights the texture and warmth of the brick, giving the house beautiful night-time presence.

High impact acdc MAGNA fittings have been recessed into the sandstone flagging, their focussed beam lighting up the full three storey height yet only consuming 7W of power. acdc GALLI compact in-ground marker lights are used elsewhere to highlight small external features, their compact size making them blend neatly into their surroundings.

For the planting and garden perimeter, Louise chose the acdc SPEK – a discrete compact single LED spotlight, suited to the most challenging of environments. MAGNA, GALLI and SPEK all feature a wide range of colour temperatures and beam angles, making them incredibly flexible to achieve a variety of effects.

Louise comments: “I aspired to create a house lit totally with LED lighting of the highest quality and I found that acdc was the most professional, helpful and knowledgeable company I could find. I spent the best part of two years searching for the right supplier. The acdc fittings have provided functional and beautiful light throughout the whole house inside and out”

More in this category: « Concord rises with the tide Lumi-Plugin: Luxury lighting that hides fire safety »
Login to post comments
back to top