Invest in your home from under the kitchen sink 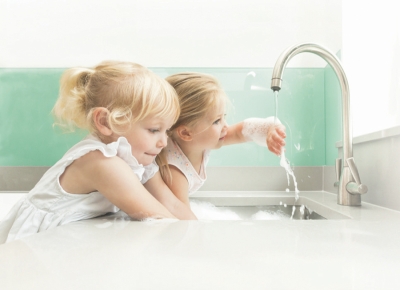 The water that runs through your home is vital to the maintenance of it; impacting everything from your kitchen and bathrooms, to boiler efficiency. Rainwater is ‘soft’ but when it flows underground through lime and chalk, it picks up minerals. These make the water hard. When hard water runs through your pipes it will result in a build-up of limescale – staining your bath and taps, marking your tiles, clouding your shower screens and making appliances inefficient. You might have spent thousands on a new suite, but with hard water it won’t be long until scale makes it look years older.

If you live in a hard water area, you will know about the limescale deposits all over sinks, baths, shower, surfaces - anything the water touches. 84%* of people state that unsightly scale build up on taps, shower heads and shower screens is the most annoying effect of hard water in the home, with 85%* of these people noticing shinier taps, shower heads and shower screens after having a water softener installed. With a water softener, you can prevent hard water damage from happening throughout your home and also reverse damage that has been done. It will make your home look newer for longer.

With a Harvey Water Softener the investment in a kitchen or bathroom will be protected and you will soon get to experience the 7 wonders of Harvey Water: shiner home, glossier hair, softer skin, fewer products, longer lasting appliances, cheaper bills and bigger bubble baths.

Limescale build up will disappear from surfaces, taps and showers meaning you will spend less time cleaning, and more time on the things you enjoy! Appliances such as your boiler and washing machine would have built up centimetres worth of scale over the years - softened water descales pipes and appliances so they will last longer and be more efficient, saving you money throughout the home.

It’s not only around the home you will see the benefits. Softened water is great for your family and saving money on your weekly shop; products lather better in softened water so you will use fewer. Your hair will be more manageable, shining without the use of extra products. If you suffer from dry skin conditions, such as eczema and psoriasis, you might see improvements there too.

Harvey Water Softeners is an award-winning family owned business, with its most recent award being The Queen's Award for Enterprise in Innovation. It produces the UK’s best-selling No.1 water softener designed and manufactured in the local factory in Surrey. A Harvey Water Softener is built with twin-cylinders which allow for continuous 24/7 softening. This softening process uses both cylinders simultaneously to improve flow rate and is at the forefront of innovation. No water is wasted thanks to the accurate metering system so the water softeners work at optimum efficiency. Fully WRAS approved, these water softeners are designed and manufactured in the UK for British homes.

The Harvey Water Softener works by a process called ion-exchange, which removes the hardness minerals of calcium and magnesium from the hard water. When the mains water enters the water softener, it moves through microscopic ion-exchanged resin beads which trap the hardness minerals, softening the water as it enters your home. A water softener is plugged into your mains water supply, giving you uninterrupted softened water 24/7.

The Harvey water Softener is compact enough to fit beneath a typical kitchen sink, but can also go in other convenient places such as a garage, loft, utility room or on an outside wall. It’s non-electric, so requires no maintenance or programming, and it uses block salt tablets rather than heavy bags of loose tablets. And best of all, it keeps new kitchens and bathrooms looking newer for longer, so all that hard work to get your home finished doesn’t go to waste.

Invest in your home

A water softener is the perfect investment for your home, make all that hard work last longer. Harvey Water Softeners offer a 3 month trial, so you can feel the difference for yourself before investing. 96%* of customers would recommend a Harvey Water Softener, including Dennis and Anita from Berkshire: "We were fed up of appliances failing, we changed our shower head every 6 months. It used to spew water everywhere, since having the water softener we haven't replaced it in months. We were skeptical at first, but after having a demonstration we could feel the difference. We have 100% noticed a difference, also using less shower gel and shampoo. Hair is softer and cleaner, you can definitely feel the difference. The entire process has been great."

*from a survey conducted by Harvey Water Softeners in 2018 with 2,600 respondents.