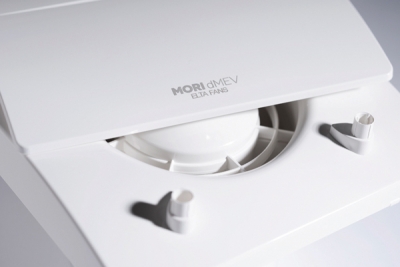 Receiving the accolade at an Awards Dinner at the Grosvenor House Hotel, London, David Ball, chairman of Elta Group said: “We are delighted that the judging panel has acknowledged the many features and benefits the Mori dMEV brings to the ventilation market. It’s a fitting tribute to the hard work and innovation the team has put into its development.”

The Mori dMEV has been painstakingly designed. During a 24 month development and testing programme every aspect of the product’s design was scrutinised. For the impeller alone, in excess of 35, 3D models were created. These were reduced down to 19 prototypes which eventually became the Mori dMEV unique ‘bladelet’ impeller.

This unrelenting attention to detail was applied to all aspects of the design, development, construction and testing of the unit resulting in leading SFP performance and minimal noise emissions and running costs.

“I am proud of everyone that has been involved in bringing the Mori dMEV to market. This product is the most efficient dMEV unit ever produced and has provided our dedicated residential team with a fantastic product which has already been warmly welcomed and acclaimed” said Mr Ball.

More in this category: « No need to pay a premium for energy saving radiators Unseen and underfloor; heating that packs a punch »
Login to post comments
back to top