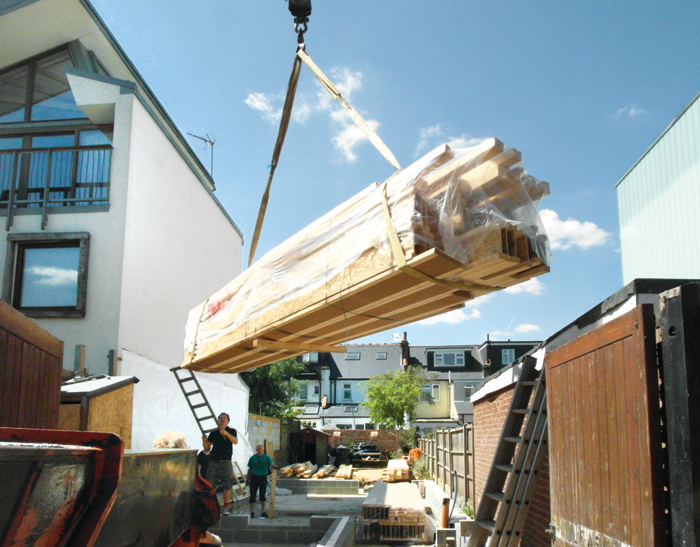 Each issue i-build follows Will Anderson on his self-build journey. This month, the timber frame reaches for the sky.

The construction of our timber frame began with an epic delivery: almost all the components of the building arrived neatly wrapped in gigantic plastic bags on the back of a big green lorry. They were slowly craned off and unpacked so, by the end of the day, the lorry was bare and our six metre wide plot site was piled high with engineered timbers. Every piece, from the longest sole plate to the shortest nogging, was marked up, labelled and cut to size. A modern timber frame is basically an immense three-dimensional jigsaw puzzle.

We opted for timber frame principally for its environmental credentials, especially its energy performance. Our walls are constructed from 300mm engineered ‘I-beams’ which are very thin, and so cause minimal heat loss themselves, and create deep cavities that will be filled with Warmcell insulation. Crucially, these walls will also be exceptionally airtight. Most timber frame homes rely on a taped up interior membrane to achieve an airtight shell but our supplier, Touchwood Homes, has developed an alternative approach that has proved to be highly effective and is likely to be more robust in the long term. The airtight layer of The Orchard will be the outer sheathing board of the frame, which is manufactured with tongue and groove edges that can be carefully fitted and glued together, creating a seal that should last as long as the house.

If our sums are right, this airtight, super-insulated frame, will, with appropriate ventilation, provide a comfortable interior with an annual heat load of only 1500 kilowatt-hours, less than a tenth of the average. As we plan to live in the house for the rest of our lives, a bit of extra effort now is obviously worth it. Why pay for heating when you can pretty much design it out?

There was a bit of a pause before the frame started rising from the slab as great care was needed to ensure that it was sitting plumb and dry on its foundations. Every upright I-beam of the ground floor wall sits on top of a horizontal sole plate – a special insulated I-beam – that is fixed to the blockwork plinth with a plastic damp-proof membrane sandwiched between the two. The plinth was also a sandwich. Rather than using solid blockwork, which becomes a ‘cold bridge’ taking heat out of the building, we used two 100mm leaves of blocks with 100mm of Kingspan insulation in-between them. You have to pay attention to every detail if you want to build a seriously low energy house.

Once the damp proof course and sole plates were in place, the fun could really begin. In the hot summer sunshine, the first walls went up in no time. There were four of us on site – two guys from Touchwood Homes plus me and my cousin, Tom, all beavering away under a high summer sun. Adam Wilkinson from Touchwood was in charge, an old hand at timber frame building and a cheerful director of operations. Touchwood is a family business and I was pleased that the Wilkinson family was happy for the Anderson family to fully participate in this, the most exciting part of the entire self-build.

It’s a great moment in any self-build when the project moves from two to three dimensions and your gaze rises above the ground for the first time. The Orchard is not a big house but we designed the ground floor as a large open-plan space, looking out through wide windows into a garden. So it was great to stand in this space, properly defined for the first time, and get a feel for its proportions and possibilities. After years of designing and planning, the house has finally begun to move from dreams to concrete and timber reality.

More in this category: « Digging deep Fast forward »
Login to post comments
back to top