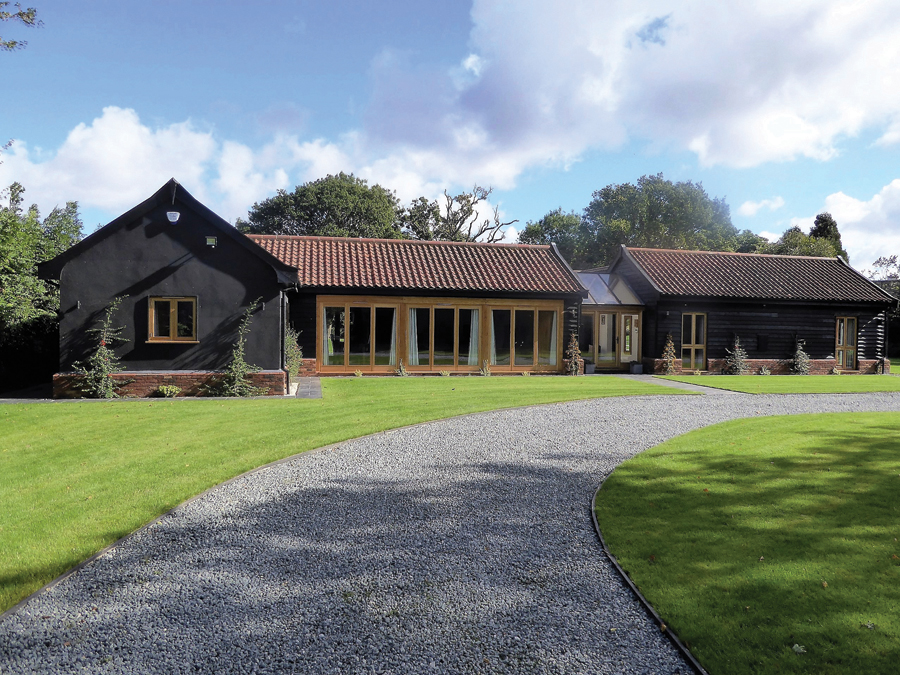 When Paul Withey took on his fourth barn conversion project in the rural area of Attleborough, he thought he’d be restricted to an oil boiler for his four-bedroom barn’s heating and hot water. However, after investing his time into researching renewable heating solutions, he found the solution to be a ‘no-brainer’.

Paul’s choice in a 100-year-old small storage barn near Attleborough, south Norfolk, proved perfect for another renovation project. Commenting on what drew him to the derelict build, Paul explained: “Although the barn was in a rather poor condition, the main reason why I chose this one was because of its location, and I could see the potential it had. I have converted three barns during the last 30 years and have enjoyed the renovation of them all, but this one was particularly a challenge.”

Paul continues: “One of the stipulations of the planning consent was that we had to keep the same format and layout of the original barn. However, my initial vision for the project was to keep the barn as a ‘barn’ and not transform it into a modern dwelling, so this wasn’t too much of an inconvenience – also, my vision was to enjoy the peaceful surroundings of the one-acre plot. In terms of appearance, having renovated three barns in the past I knew what I wanted both aesthetically and from the configuration of the build.”

It took Paul one year to gain planning permission for his Norfolk barn conversion. From start to finish, Paul project managed the conversion himself; hiring a highly experienced builder he had worked with on his previous conversions. Paul initially hired an architect to assist with his project, however, after permission had been granted he managed the project by himself.

The build programme took about nine months and was within the timeframe that Paul had envisaged. He explains: “The conversion was completed in October 2015 and we moved in during November 2015. We came across a few complications throughout the build process, but I have to say the biggest difficulty was that the original barn walls were clay lump which made it very challenging. We approached material and product specification with great difficulty at times. The new rules for Building Regulations made it challenging but my builder was aware of most of them.

“In terms of materials, the project was a timber-framed building. At first, I was a little hesitant to use this type of building material but in the end I was glad I did.

When Paul set about converting his barn into a sympathetic four-bedroom home, he thought the rural location meant he would be tied to a conventional oil boiler for heating and hot water. However, following a recommendation from his architect, he began to investigate ground source and quickly realised it provided the ideal alternative. With Government funding available under the domestic Renewable Heat Incentive (RHI) scheme, opting for a ground source heat pump system was even more attractive.

Finn Geotherm specified and installed a Lämpöässä Vmi11 ground source heat pump with integral 480 litre thermal store to meet all of the 3000ft2 barn’s heating and hot water needs. The system was installed with a secondary return to provide almost instant hot water, and a water softener added due to the hard water area.

By involving Finn Geotherm during the planning stages of the project, Paul was easily able to incorporate a plant room for the heat pump inside his home and get the required 700m of ground loop laid in his garden before any landscaping took place. The heat pump connected directly into the barn’s underfloor heating circuit.

“I can’t speak highly enough of my heat pump system and the service I’ve received from Finn Geotherm,” comments Paul. “Our home is constantly warm throughout – there are no cold spots and every room is always warm. We’ve had two winters with the system now and I have been very impressed with both its performance and the running costs. Our heating and hot water bills are significantly less than we were used to paying for oil-fired heating in our old house and we don’t have the additional hassles of ordering deliveries to make sure we don’t run out of fuel. The RHI payments really made the choice a no-brainer. Our system will have been paid for by the RHI in seven years and during this time – and for years afterwards – we are receiving all our heating and hot water at an extremely low cost.”

Paul’s conversion houses a very large (136m2) open-plan room consisting of a lounge, dining area, kitchen and sitting room area. There are four bedrooms altogether – one with a walk in-wardrobe – two large bathrooms, a plant room and a glass link between the main living rooms and the bedrooms and a cloakroom.

Commenting on the interior, Paul said: “The open-plan lounge and dining area are my favourite rooms within the house. The open plan gives it a nice free and airy feel. It is also very ‘family-friendly’ because wherever you are in this open-plan area, you can communicate with each other rather than being shut away in another room. For example, when preparing a meal, you can be in the kitchen while talking to someone else in either the lounge area, the sitting room area or the dining room area. I also love the large glass front to the lounge and dining area.

“Overall, what I love about the build as a whole is the open plan and its wonderful location. Also one of the best decisions I made was to invest in the Renewable Heat Incentive scheme by opting for a ground source heat pump system for all my heating and hot water.”

When asked what the local community think of his build, Paul responded: “Although the barn is in a nice secluded location, those people who do live nearby think that it is a wonderful renovation. The build responds excellently to its neighbouring surroundings, as you can see from the photos, and the finished article is even better than I ever thought. If I were to do it again, I can honestly say that I wouldn’t do anything differently.

“If I was younger, I definitely would undertake another conversion, but at my age I don’t think I would do it again. My advice for others is if you haven’t any experience at this type of work make sure you get a good architect and a builder who have done this type of work before because it is so different from a normal house build.”

More in this category: « A stirling example of Passivhaus best practice A Mediterranean retirement home »
Login to post comments
back to top