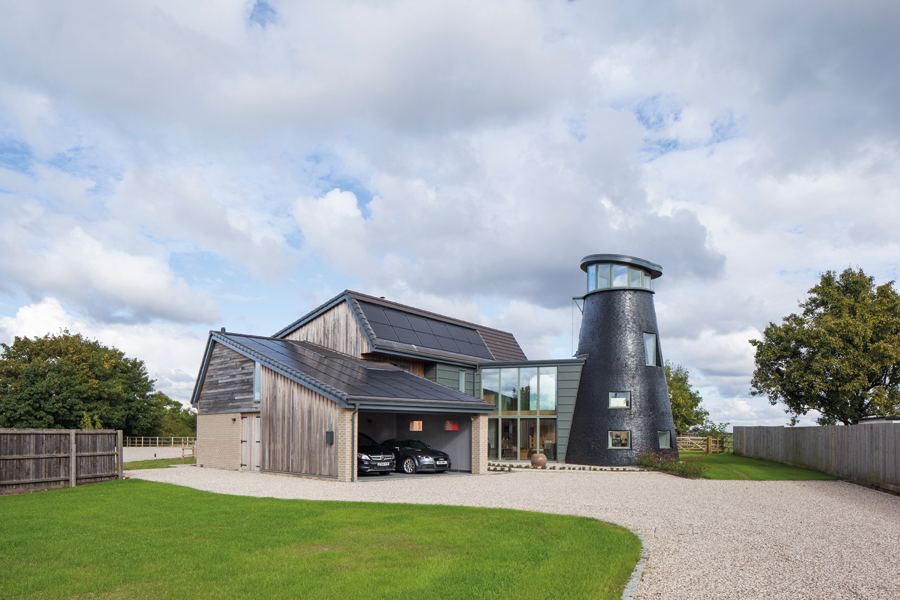 Hindsight is a wonderful thing. Many of us look back and say “in hindsight, I would have done things differently”. However, few get the chance to rectify their mistakes. Luckily for second-time self-builder Henry Martin, an available plot of land allowed him to amend elements in the design of his subsequent self-build.

Having previously taken the self-build route, Henry is all too familiar with the dedication and hard work that’s associated with building your very own home. So, when it came down to the process of his second self-build, Henry was well aware of what he wanted and how he wanted to achieve it.

“Our first self-build was fairly simple,” comments Henry. “We built our first home 10 years ago and, at the time, it was great for the kids growing up. However, there were a few things that we didn’t get 100% right the first time round, and by completing another self-build this allowed us to rectify the mistakes we made.”

The Martins had lived in the Cambridgeshire village for 30 years and, as they already knew the area, didn’t want to locate to an alternative neighbourhood.

Henry discovered his plot for Tower Mill whilst searching through the newspaper; a run-down mill inclusive of attached pig sheds. After discovering the plot was up for sale, Henry took a trip 10 miles down the road to Little Downham, climbed the fence and wandered the perimeters of the land. He was approached by the owner of the ruined 19th century windmill and adjacent land. During a brief discussion, Henry advised the owner that he was interested in purchasing the plot and the process began.

The owner later contacted Henry after organising planning consent for the land and enquired if he was still interested in the plot for his second home. After agreements, Henry purchased the land and his self-build journey began.

“The planning consent was changed considerably,” comments Henry. “ The consent originally permitted a simple addition to the mill, but we increased the size. From a planning perception, it wasn’t really a risk as the planners had agreed to have a house attached the mill.

“There are just two of us living at Tower Mill currently – but we do enjoy having guests and having the kids come back at weekends.” Although there’s just Henry and his wife living at Tower Mill, the space within the mill itself would have been inadequate for a one-bed home, therefore, if the Martins hadn’t extended the property, it would have been uninhabitable. “The bottom of the mill has a diameter of around five to six meters,” explains Henry. “We created three levels within the mill – we could have created four or five at a squeeze, but this has enabled us to keep good heights within.”

For the design of their home, the Martins called upon the expertise of Architect, Judith Brear, of Freeman Brear Architects. “Coming from a construction background, I project managed the build myself and worked well with Judith. I can visualise spaces and understand capacities from drawings, but I can’t do the detail! Judith has incorporated elements that I wouldn’t have dreamed of.” The build took slightly longer than Henry expected, but the team weren’t pressed for time. “It took around 12 to 15 months to start on site,” elaborates Henry. “This allowed plenty of time for the design and procurement. From there, it took a further 12 months on site, this was mainly due a team of three to four-strong workmen from the contractors being on site. Rather than flood the site with labour, we found it best to keep this workforce.”

When it came down the external building material specification, Henry opted for zero maintenance elements. “I’m 58, so I don’t want to be climbing ladders in 10 years’ time. I don’t have to touch anything on the outside of the build. We’ve used powder-coated steel and heat-treated timber – which you don’t even have to stain, it will mellow with age – we also applied a tar to the mill which should last 10 to 15 years.”

Henry’s zero maintenance theme extends out to the garden, where the landscaping has been kept as simple as possible. The Martins opted for seeded grass areas and hedges.

The internal aspects of Tower Mill are highly energy-efficient, as Henry explains: “It’s all about how low you can get the running costs of a build such as this,” explains Henry. The utilisation of efficiency specialist Eco Installer’s modern technology has been specified for Henry’s home to contribute to the mill's efficient running costs.

The team at Eco Installer worked hand-in-hand with Freeman Brear Architects who developed the initial design and details such as a glazed viewing area and mezzanine which provide uninterrupted views over the surrounding countryside and allows night-time observation of the big Fenland skies.

As well as its architecturally-stunning exterior, Henry’s home has been designed with energy efficiency at its core with a biomass boiler, rainwater harvesting system, and a mechanical ventilation system keeps the house warm in the winter and cool in the summer and reuses up to 95% of the heat that would have otherwise have been lost.

Roland Gurner from Eco Installer said: “Our homes and the way we construct them will have a huge role in ensuring we enjoy a more sustainable future. Tower Mill is a prime example of how technology is helping to drive sustainable solutions and helping to address both environmental and economic concerns.

“Tower Mill has a ‘Double A’ energy performance rating and electricity, wood pellets and water will cost about £1000 a year (before any Government grant income), but that will include repowering the electric car for 9000 local miles. Which is exactly what Henry wanted to achieve. With the renewable technology, energy bills should always be as expected and they will not be affected by fluctuating energy prices.

Henry commented: “I was keen to invest in various renewable technologies to produce a property with the lowest possible carbon, running and maintenance costs. The team at Eco Installer really excelled themselves. I wouldn’t hesitate to recommend them for future work and have every intention of using them to help build my daughter’s house.”

Architect, Judith Brear, added: “We worked closely with Henry and Eco Installer, who are responsible for many of the clever, energy-saving installations at Tower Mill, to create the home of his dreams – an exciting, contemporary, comfortable house which costs little to run and requires minimum maintenance.”

Aside from the energy-saving aspects within the build, Tower Mill’s interior boasts Amtico flooring throughout the ground floor. “I had used Amtico flooring before, however, our Architect Judith took this to another level. The floor finish contains a circle in the main hallway which reflects the circular shape of the mill itself. In fact, Judith has based the whole interior concept on the disc-like shape of the mill; the curved staircase mirrors the mill and radiates from the centrepoint of the hall.

“Ash timber has been used within – again; simple and stained. The black stained wood from the mill continues within as well as the timber cladding. The beauty of this is the continuation of external elements within the build.”

The feedback Henry has received from the local community has been overwhelming, as he explains: “The build has been well-received amongst the locals. We invited the neighbours over for a Christmas party when we moved in to welcome the building to the village. Everyone knew the mill; it was a landmark for the village – many neighbours have memories of strawberry-picking as a child here. It was nice for the community to see the mill being brought back to life.

“The build is everything we hoped for and more; the spaces are large yet don’t feel too large and it’s homely. There are delightful features in every corner which put a smile on my face each time I look at them.

“What I love most about Tower Mill is the brightness coming through all spaces. I like the day-living space (the link between the mill, hallway and kitchen area); it’s very bright and provides the perfect space to read a book or listen to the radio.

“I wouldn’t consider taking on another self-build – I just can’t imagine doing one better. It takes a lot of time, commitment and effort. You have to be resilient by the knocks that come along the way and you have to accept that these things happen.”

• 20kW biomass boiler and wood pellet silo (for heating the family home)
• Mechanical ventilation with heat recovery (to provide the family home with filtered, fresh air in every room, all day every day)
• 10kW solar panel system (for electricity)
• 6kWh solar battery storage (to store excess solar generation which can be used in the evenings when the panels are not generating as much energy as needed)
• Solar iBoost (an immersion heater controller that uses excess generated electricity to heat water for free)
• Underfloor heating (hydraulic – ground floor and electric – bathrooms)
• Rais double aspect stove
• Rainwater harvester (to collect, filter, store and pump rainwater to the point of use in the garden)
• LED smart lighting
• Security cameras
• Charging points for electric vehicles.
Tweet
Rate this item
(0 votes)
Published in Sustainable Living
Tagged under

More in this category: « Architect’s interest in low-energy technologies shine through in self-build A stirling example of Passivhaus best practice »
Login to post comments
back to top