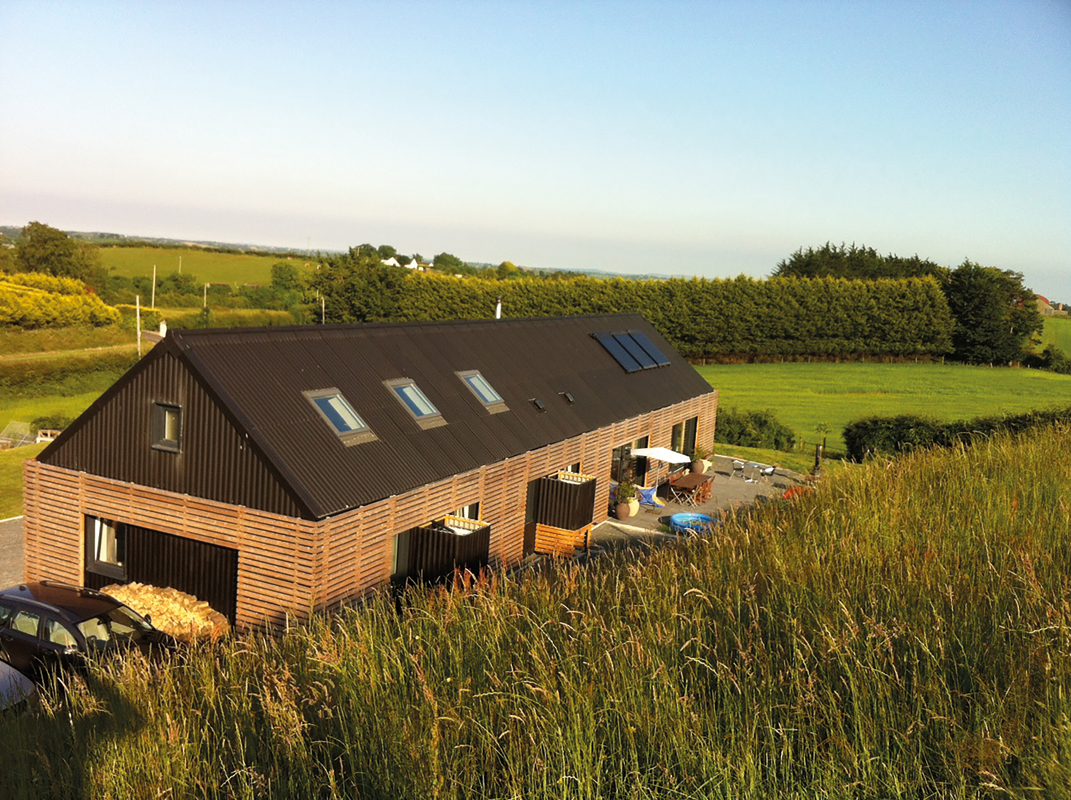 As an Architect, Michael Montgomery has always had the desire to design and build his own home, where each element could have a personalised touch. After inheriting a plot of land in Saintfield, Northern Ireland, Michael’s interests in low-cost building materials and low-energy technologies have been realised in the design and build of his very own home.

Michael began work on the project in 2012 and completed the site dig out, drainage and foundations by the end of the year. In early 2013, construction recommenced and the upstairs and landscaping are currently being finalised.

One of the reasons behind Michael’s decision to undertake a self-build project was to allow him and his family the chance to incorporate low-energy technologies into the build. “At university, I had an interest in low-cost building materials, including agricultural products that were utilised for sketch designs,” explains Michael. “In building our own home, I have just picked up where I left off. I have also been following the work of Dualchas Architects in Scotland, who have a large portfolio of modern dwellings with an agricultural aesthetic.”

After inheriting their plot of land, the Montgomerys realised that the land was a difficult site due to steepness and waterlogging. Michael comments: “The site was very steep, waterlogged and very exposed. Managing a full-time job and the project simultaneously was very challenging.”

Acting as the project manager for his self-build, the design was completed by Michael but the family had to obtain the help of a third party (another architectural practice) as part of their self-build mortgage agreement to sign off the stage payments.

Commenting on the building materials used, Michael says: “I was very keen to use both fibre cement and timber cladding. I was also keen to keep the construction down to the bare minimum trades. We were lucky to find a very good joiner who was able to complete the majority of the work once the blockwork was complete. The actual products and suppliers were chosen following careful research.”

Amongst the careful consideration of products designated for his project, Michael specified Cembrit’s B5 corrugated sheeting. Michael’s project saw 210 black sheets installed on both the walls and roof of the Montgomery’s property.

Michael required a perfectly scaled corrugated sheet for the roof and walls of his property in the rural Irish countryside. Fibre cement has a number of advantages over metal sheeting, such as it being rust-resistant and not noisy in the rain. It is for these reasons, and the profile and depth of corrugation, that he decided to work with Cembrit B5.

“Fibre cement corrugated sheeting is the perfect aesthetic for use in the countryside,” comments Michael. “My requirement for the sheeting was that it would not only suit the surroundings of the property, but also accommodate the installation of solar thermal panels. Cembrit B5 ticked all the boxes. I looked at other suppliers but the sheets were either too small or too large – the great thing about B5 is that it can be fitted by a good joiner.”

Cembrit B5 metric corrugation is a more modern and deeper profile than the traditional three-inch profile corrugated sheeting. It can consequently be used to a lower pitch and with smaller overlaps. B5 is available in 14 different lengths, ranging from 4" to 10"6 and are approximately 40% wider than the older three-inch profile design, offering better coverage per sheet.

The house relies on renewable and low-carbon energy through the use of the heat recovery unit, wood-burning stove, back boiler and solar thermal panels, and does not use any oil or gas. For this reason, Michael is considering applying for the respective Passive House accreditation. The Passive House Institute has assumed a leading position with regard to research on, and the development of, construction concepts, building components, planning tools and quality assurance for especially energy-efficient buildings.

Michael’s property responds very closely to Passive House principles, as he explains: “The orientation and construction U-values all meet the requirements. The house was constructed very quickly and one key element which falls short is airtightness. However, we have identified the locations and have been trying to improve. I hope to retest the house later this year, mainly for professional curiosity! Also, our heat recovery unit has not been tested for Passive House and, therefore, does not achieve the accreditation.”

Talking about his renewable features, Michael says: “We fitted solar hot water panels and a wood-burning stove, connected back to a large accumulator tank. Both systems have received the RHI grants and payments.

“We also have large amounts of glazing in the open-plan spaces, which provides great natural light and additional heat during the winter (when we have sun!), yet they are triple-glazed, so heat loss is not too bad.

“We also have rainwater collectors to the rear of the building that we have used for supplying water to the vegetable patches, but the storage collectors have been located in close proximity to the main bathroom and allow for future connection to the toilets.

“The open-plan living/dining/kitchen areas have been orientated south and west with large areas of glass to give solar gain, maximise daylight and for supervision of the enclosed play area to the rear. A central corridor has been produced at the front of the house to act as an acoustic barrier from the main road, whilst windows to the north have been kept to the minimum to help reduce heat loss.”

On time, on target

After waiting 12 months to gain planning permission, the first summer was spent clearing the site, completing the ‘cut and fill’ site works and inserting drainage around the site. Following this, the foundations started in November. “The construction started the following February, once we had the mortgage in place, and we moved in over Halloween,” says Michael.

“Our aim was to be in for Christmas, which we accomplished. There was still landscaping and works to create a first floor to be completed, which we have been finishing over the past couple of years, as and when money and work commitments permit.”

Due to the steepness of the site the most cost-effective site planning was to ‘cut and fill’ the site to create a stepped terrace, each wide enough to accommodate a level garden and house footprint. Raised planter beds to the sloped areas to the rear have been constructed to provide a large vegetable garden.

“Most thought was given to the earth retainment to the rear of the property, essentially to hold back the hillside and provide a sheltered play area,” says Michael. “Various options were considered including reinforced concrete walling, gabions and crib walling. Rock armour (large quarry rocks) was finally chosen mainly due to time and cost.

“The enclosed area to the rear has been paved and a small area of artificial grass has been laid – this space has been great for the children and for the occasional BBQ!”

When it came down to the planting, the Montgomerys received advice from a relative of theirs, a landscape contractor, for the design of the garden area. “Small whip trees were planted, which are now starting to be noticeable and help screen the agricultural shed and main road. We have used local tree species with mainly silver birch to complement the natural timber cladding which is starting to go silver-grey and alder, as they like the boggy ground and are quick growing. We have also planted a large quantity of buddleia to attract butterflies.

“The gardens are very important for the kids, we have a maintained ‘lawn’ to the front of the house where we have built the children a jungle gym-type structure with a slide and swings. Native trees have been planted around the perimeter which will hopefully provide shelter in the future.

“Wildlife has been very important and we have incorporated a small pond and attempted an area for a bug garden to attract beneficial insects. We also have two large bird feeding stations, and are very surprised with the results, with daily visits from blackbirds, thrush, robins, various tits, finches, wrens, collared doves, sparrows and the occasional sparrowhawk.”

When asked what the local community think of his new property, Michael humoured: “I’m unsure; some people view it as a barn and others love it and have knocked the door to ask for details of the designer.”

The finished property is everything the Montgomerys expected; open-plan living, built with low-cost building materials and incorporating low-energy technologies.

There are a few things, however, that Michael would have done differently if a larger budget permitted, as he explains: “I would upgrade or add more dense acoustic board to further reduce the noise of the traffic from the main road.

“I would also design into the building more firewood storage – both interior and exterior – as it allows the wood to dry longer and makes the stove more efficient.

“Additionally, I would possibly add floor tiles to the open-plan living/kitchen/dining area. The engineering wood we have chosen is fine and matches the style of the house, but with the kids and the dog, it is starting to mark in places.”

When asked if he remained within his original budget, Michael responded: “Yes, our budget from the foundation up was £150k. Our exclusions have been the landscaping, and first floor works have since been completed with additional costs.”

Michael would certainly consider undertaking another self-build again, his advice for other self-builders is to “find a good architect and have the house designed to Passive House standards”.

More in this category: « Stommel Haus helps couple achieve Canadian-inspired home Self-builder’s second project enables him to rectify inaccuracies made in first build »
Login to post comments
back to top