Sue Eakers on the design decisions behind her eco-friendly house 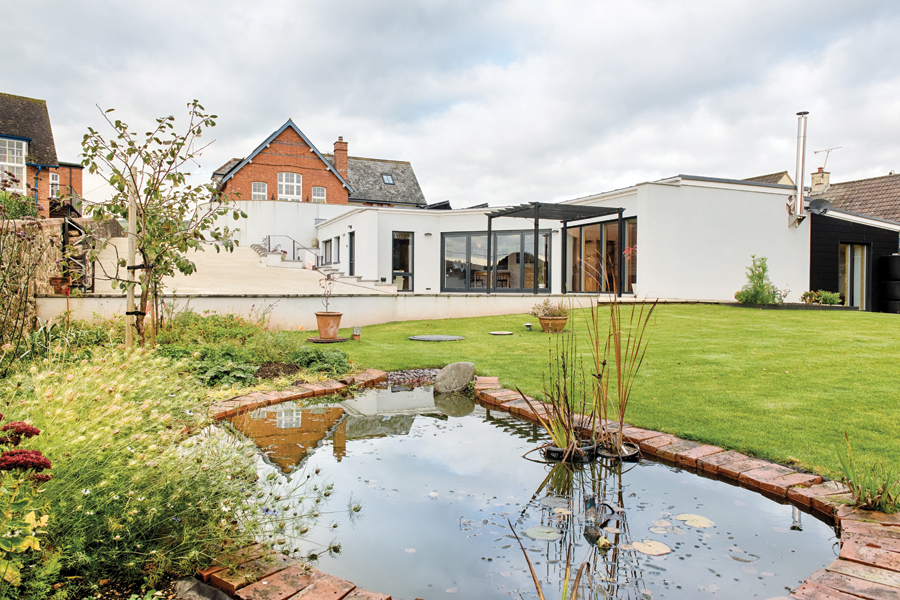 Sue Eakers had always wanted to build her own home. After fruitless years plot searching, by chance she came across the old school house in a conservation area in Bradninch, Devon, which had been granted planning permission for a two to three-bedroom, single-storey eco house.

In December 2009, we purchased two properties from the Bradninch Town Trust,” explains Sue. Low Down House is in the old school’s garden, sold as a separate building plot with planning for a single-storey, eco house of approximately 1900ft2. The approved design was for a contemporary-styled bungalow with eco features comprising an open-plan kitchen/dining/living space, three bedrooms – with one en-suite – a bathroom, utility room and rear courtyard sitting in approximately 0.16 acres with shared access. Although planning permission had been granted for a two to three-bedroom, single-storey eco house, Sue had to seek planning permission to change the roof from green to PVC and the exterior wall cladding from cedar to slate. She also wanted to include a garage/workshop within her plans, but she could not agree on a design with the conservation officer. She explains: “After submitting 17 garage designs, I agreed to their directive, but never built the garage. The process trailed on for seven months and was holding up the main build.”

The self-build would be semi-sunken with the west side attached to a retaining wall. The north and west side of the house are set against the walls; it’s as if the building has been reversed into the space and then hunkered down – hence the name Low Down House. “Many in the town have no idea that there is a house in the old school garden,” comments Sue.

Access to the property is severely restricted by existing buildings either side of the drive entrance, at approximately 2.8m. This proved difficult to bring materials on site and was always a challenge, as Sue explains: “The entrance to the drive is a gap between two historic town buildings, the guildhall and the former police house, followed by a sharp turn and a steep rise. Instructions given to companies to send small vans often failed, resulting in a lot of ‘hand-balling’. On the day the insulation sheets arrived, in the largest of articulated lorries with a forklift on the back, the driver declined to use the fork lift and sat in his cab while we unloaded – by hand, from the street, in the rain – 300 full-size sheets to carry over the last 200m.

“The pumping of the 30 tonnes of liquid concrete for the thermal wall had to take the same route. It took a lot of pressure to push the concrete up the hill, past the school house and up into the proforma shuttering. When the shuttering was full, there was still 200m of hose full of concrete to empty out – it just kept flowing. Luckily, the excess concrete was able to be shovelled into the back wall.”

The footprint and some of the design features, which came with the site’s planning permission, were along the lines Sue had in mind: “I had a clear vision of the home and therefore did not require an architect, just a Building Regulations specialist and a structural engineer. The main contractor had undertaken the work on the old school house and his team were trusted and willing to attempt techniques they hadn’t used before.

“I wanted a home that was energy-neutral; geometric lines, easy-to-clean, lots of daylight and warm – somewhere that would suit the finishes I had in mind.” From the original plans, Sue removed many elements, to ease the budget and make the house more workable. The self-build's concept is centred around angles, including exterior and interior walls, the peninsula cooking area, the room divider – made of salvaged timber – and even the lights are at oblique angles.

“I dropped the original sedum roof, as this was too much hassle – the birds eat it! This also avoided the additional build strength that would have been needed to bear the weight. I went for a commercial Fatra roof, as I had seen it used on a school in Cardiff with standing seams. I also dropped the en-suite – a single-person bungalow doesn’t need three loos. This allowed for a bigger bathroom with a walk-in shower and a larger master bedroom with more light and storage. “Space allocated for an outside courtyard was reclaimed – which would have been a cold, north-facing sink hole, as no provision had been made for a plant room – and believe me, the systems in this house needed a lot of space!”

Sue specified insulation double, or more, than the Building Regulations requirements to the walls, floor and roof. She explains: “My thinking was that once generated, ‘heat’ would be kept. I wasn’t aiming for a ‘Passive house’, but when the air permeability test was done, it was 2.49m3 and SAP ratings were 94/96.” These results made Exeter-based provider of heating and insulation, Timóleon, which supplied Sue’s underfloor heating, mechanical ventilation heat recovery (MVHR) and air source heat pump, very happy.

Timóleon helped Sue to achieve her ambition of creating her new home, with a very low level of environmental impact and running costs, resulting in a property with high standards of indoor air quality and comfort.

Timóleon’s Omnie equipment managed to fulfil all of Sue’s design intentions, as she explains: “I wanted to build a home that was as low energy as possible and to take a responsible approach to the specification of its building services, so that it would not only provide peace of mind for myself in terms of future running costs, but also make a positive contribution in respect of concerns over carbon reduction and our energy security.”

Sue has always had solar PV and in planning an all-electric house, generating electricity was a must. However, to fix an array to the single-ply PVC roof caused some ‘head-scratching’ for Sue, as she explains: “As the roof material could not be screwed into or punctured, the solution was to fix the 12 panels to ‘trays’, which are weighed down with breeze blocks.”

Low Down House is more than 66m from a fire hydrant, so a sprinkler system was needed with an 800 litre reserve tank. “This is for peace of mind as I understand that no one has ever died in a property with sprinklers,” explains Sue. “Although on mains water, I’m not connected to the mains sewage and have a self-contained Rewatec sewerage solution, saving the charge from the water company.”

With the idea of using ‘commercial’ materials in a domestic setting, Sue included a variety of design features into Low Down House’s scheme, including a thermal mass spine wall, made from poured concrete with some textured wood finish, a metal fabricated hearth – from her time spent designing industrial kitchens – for the wood burner, Altro Whiterock wall cladding for the wetroom and kitchen walls, Altro safety cork flooring, pocket doors, Velfac windows, bi-fold doors and pre-coloured render.

“The major design element would be the internal concrete wall, visible in the main rooms,” explains Sue. “I chose cost-effective fencing planks for a textured section in the living area and intended for the remaining concrete to be plastered, but when the shuttering was taken off, I liked the plain finish, so all the poured concrete is exposed. I ‘filled’ the holes left with bracing bolts with ash wood bungs, for a quirky feature.”

The house is flooded with natural light, holds the heat and has lots of circulation space. The external render and the interior painted walls are a light grey. Inside, the paint finish has a different effect in every room as it picks up from accent colours and the concrete. Wicanders’ cork flooring, from Spain, has mellowed and provides sound proofing and warmth underfoot. The windows have an internal wood finish, which links to other wood features, including the mahogany shelves in the main room, salvaged from a school, and beams from the school house.

Sue also put thought into how her home would provide for her as she got older. The doorways are wide and wheelchair access is possible, the walk-in shower can cater for a chair and the three entrance steps are 1.6m wide to allow for, in time, a lift to be added. Low Down House is single-storey, but there are two levels, the rooms at the back are set lower, to prevent light blocking from adjacent homes.

Sue’s concept of a self-build wasn’t only the desire to have a home built to her personal specification, she also wanted to experience the process and be immersed in all aspects, to ensure her vision was realised, so she project managed the build herself. “The opportunity to take voluntary severance with Cardiff Council was offered and taken. I’d say I enjoyed 95% of the build. The people that worked on the build were diligent and took great pride in building a unique home.

“My job in Cardiff involved working with architects refurbishing and building schools. Each time I liked something, I noted the specification and asked about the supplier and costs. For the day-to-day materials on the build, the main contractor selected these and showed me them before purchasing.”

Sue wanted the build to “take as long as it needed”, and didn’t set a timescale for the build. She enthuses: “I knew that the main contractor was in demand and it would be completed in a sensible time, in order to move on. Work started on 27th July 2014 and my first night’s sleep in my new home was 27th July 2015 – however, the landscaping and the drive took a further couple months.

“I set a budget using quotes and costs learnt from a school house conversion; the main contractor included the majority of items, but finding one supplier for the renewables wasn’t easy. There was a glitch when the main contractor’s quality surveyor advised of a £14k error (and not in a good way). We agreed to take the hit 50/50. To balance the budget, I dropped the planned brise soleil and changed a few finishes. The budget was £302,000 for everything, including landscaping and turfing the total came to £306,000 and I claimed £3000 back in VAT, so was only £1000 over budget.”

Sue’s vision has certainly been realised with the design of Low Down House. She concludes: “From waking up that first morning, it was like coming home. It was great fun and a very rewarding process. For those contemplating undertaking their own self-build, I would advise to start with a detailed budget; include everything from planning fees to charges for waste, if in doubt of a cost make a generous guess – don’t leave things out. If possible, be on site every day; builders need decisions all the time and any delays will stop the momentum and if the builders have to make the choices, you may not like them!”