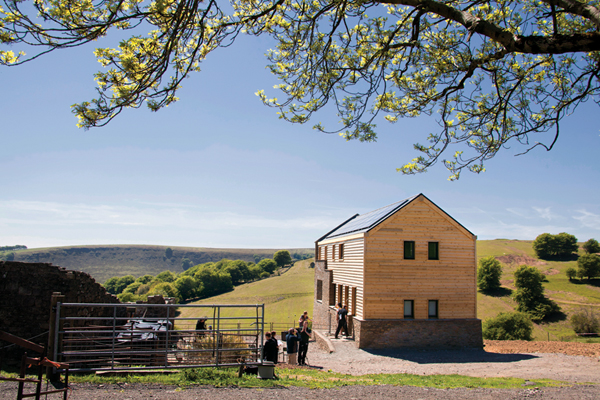 The Manmoel area comprises a small village with surrounding hill farms in the county borough of Caerphilly in South East Wales. The area around the village forms a remote rural community that was originally based on agriculture. The farm was established in 1825 and has been farmed on a commercial basis by Arthur Davies and his family for over 30 years.

Arthur explains: “My father bought it in 1946 and there was a house on it, but it was derelict and my mother refused to move up there as there was no electricity or water. It’s always been my ambition to move up here. To be honest, we had been trying for planning for 20 years and this was our last effort really. This time I think we were possibly a bit more determined and the application fully appreciated the house culture and the necessity of living on the farm.”

The original farmhouse was demolished in 1982 because it had fallen into such disrepair that it was no longer safe. Arthur continued to work on the farm, traveling every day from his terraced cottage in the village to care for the livestock – regardless of the varied weather conditions.

Their efforts to re-establish a presence on the farm was further hampered by a lack of electricity, gas, water or sewage services at this upland site. However, with the support of a number of organisations, Arthur and his wife, Sue, gained planning permission to construct a farmhouse on the former site in May 2011 and due to being completely ‘off-grid’, the opportunity was taken to test a combination of renewable energy technologies and gain insight on the impact of living and running a business sustainably.

The project involved an effective working partnership between the key stakeholders including the Davies family, CCBC RDP Energy team, BRE and SSE. All partners had an integral role to play in making the project happen and to turn Arthur and Sue’s dream into reality. The council managed the project from its initiation. BRE provided the building design work and initial technical feasibility of the renewable energy technologies and SSE provided the funding, design and installation services of these technologies.

Arthur continues: “I always envisaged building something based on an old welsh farmhouse. These would incorporate house, living quarters for the family and the buyer for the cattle. Another main idea was that we were going to clad the west side of the house in local stone as there are high winds that come from that direction.

“Once we had planning, then the various elements became involved and it took off from there. The council got the building researchers on board. We worked closely with Andy Sutton, who was the president of the Welsh Architects Society at the time, to design the house. He wanted to go north to south to make the most of the view, but I pointed out that I can go outside to look at the view. There’s a nice view all around, so I convinced him to build it west to east – plus now the solar panels can make the most of the sun.”

The new home has 21 solar panels on the roof and a battery bank that stores electricity for use at night. The family harvest rainwater from the roof, which travels through a pump and filter, producing water for washing and drinking. In the future the family hopes to add a small wind turbine to make the most of the strong winds that they get on the hillside. This would eliminate the need for the generator that they currently use.

Materials and tradesmen used in during project were all locally sourced. Stone work wraps around the building on the west side and comes round the north and south sides. The other half of the property is clad with cedar timber.

The project also specified Discrete Heat’s ThermaSkirt product due to the product’s compatibility with renewable energy sources such as solar and biomass, and its high heat transfer ability with low running temperature make it an energy efficient alternative to conventional radiators. Hot water is produced via a 20kW biomass boiler that is fuelled using the family’s own woodland that surrounds the property providing a self sufficient supply of logs. The hot water is then circulated through the heated skirting board to provide an even heat to the perimeter of each room. The compact design of ThermaSkirt allows it to free up space that would otherwise be taken up by wall-mounted radiators.

He explains: “Everyone thought that living off-grid would mean our lifestyle would have to change dramatically, but we haven’t had any problems. The only thing we’ve faced is adjusting to the lifestyle – for example, I left the emersion heater on for too long once in summer so had to rush out and put the generator on.

“In a way we had off-grid living thrust upon us, so we had to think thoroughly about how to provide electricity and water. It’s expensive to install some of this equipment, but when you start seeing the bills stop coming in, it really does pay for itself. I strongly believe in looking after the environment because it’s a no brainer, as far as I’m concerned, that man has a part to play in global warming.”

Maes Yr Onn Farm remains an on-going community project. The new home has been host to one of the Welsh Government Agricultural Department’s farming connect days that help to teach others about various elements of farming and off-grid living. Local schools have also visited the property to learn about carbon footprint and sustainable living.

“We love living on the farm. The farmhouse has a lovely big kitchen, which is great. I can’t praise the design of our house enough. It’s also brilliant to come straight into the utility and downstairs shower room from the field if the weather is bad. Plus we don’t have to get in the car to drive home anymore. Plus after 15 months in an on-site caravan, believe me we were glad to move into the house!” continues Arthur.

The entire project, including equipment, came to a total of £150,000. It was designed to code 3 of the Code for Sustainable Homes. However, with all the sustainable elements the self-build reaches the highest level possible – code 6.

Arthur says: “Although I didn’t have a clue what the team were talking about at the beginning of the project, I now know lots of sustainable terms that I try to casually drop into conversation!

“There were a few unexpected costs, such as getting certificates for any work started. The groundwork cost a lot more than expected, needing £2.5k before we even poured a drop of concrete. This is just one of the things you don’t consider and it cost us a lot. My advice to other self-builders is to be realistic with your budget. Try shopping around and beat people down on prices that they quote you. Know the hidden costs before you start – no matter how much you plan, there will always be times when a bit of extra money will come in handy.”

More in this category: « Every architect’s dream The perfect Retirement gift »
Login to post comments
back to top