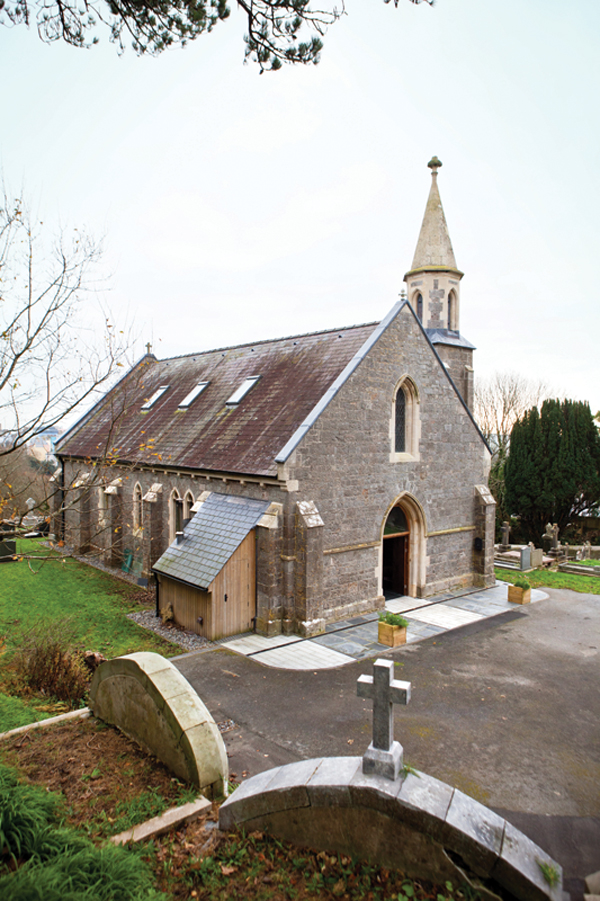 A Grade II listed church building and former aquarium has undergone a major renovation project to be transformed into a family home.

Owner Martin Hurlow, a builder and contractor who runs Hurlow Construction, bought the off-grid 160-year-old property in Tenby, Pembrokeshire with a view to convert it into a home for his daughter and her partner. Following a complete internal reconstruction spanning several months, it is now an impressive and spacious ‘upside down house’ – with four bedrooms and three bathrooms on the ground floor and an open-plan living area upstairs.

Martin explains: “Throughout my career I’d always wanted to convert either a church or an old school. So, when the chance came up to convert a church into a home for my daughter and her partner, I jumped at it.”

Although having previously renovated three houses, this was by far Martin’s biggest project to date.

“We came across the property by chance. I saw it had a ‘For Sale’ sign and drove up to have a look. I thought it would make a cracking conversion project so went for it,” he continues.

The cemetery chapel was built in 1854. These buildings were used purely for burials, meaning that no weddings or church services occurred at the site. Because the building was quite a distance from the centre of Tenby, the village eventually built a new church and cemetery in a more central location.

Due to the building’s listed status, no changes were allowed on the exterior. This meant that a lot of the original features had to be retained, such as the stained glass windows and the beams.

Martin continues: “It was all about balancing and enhancing the building as it stood, just with a few modern twists. I took inspiration from everywhere. Television programmes, ideas from projects that I’d done for other people and the architect that helped me through the planning stages all became valuable resources. I didn’t even have a final design brief on paper – it was mostly in my head and happened in a flexible, ad hoc way. I started with a basic plan that wasn’t very detailed and tweaked it as I went along.

“I had a clear idea in my mind of what I wanted and did a lot of research on the internet. Once I found the right materials, I purchased them locally or online. I would recommend other self-builders to use as many natural materials as possible. I used a lot of slate and wood, including 40 year old teak for the staircase. Finding materials that complement a building is key, so it’s worth doing your research.”.

After waiting almost double the expected time for planning permission – 20 weeks – the project could get underway. However, the nature of this conversion created several challenges. Firstly, because the property is off-grid with no heating, finding a way to heat the building was an obstacle. Having decided against the costly option of installing a gas line, Martin needed to find an affordable, reliable alternative that would meet the heating and hot water needs of the rural property.

Martin explains: “When I bought the church it was being used as a commercial aquarium and reptile house. There was no central heating and the only source of warmth came from the generators used to heat the fish tanks. Before that, the building had been empty for 20 years. Initially, I looked into running a gas line to the property – but when I found out this would cost in excess of £6000 (and that was if I did most of the digging myself!), I started exploring other options.

“Having researched NIBE’s renewable heating portfolio, I went to Good Life for their recommendation – and after completing a full site survey, they agreed that the Pellux 100 would be an excellent fit for the property’s needs. It is now tucked neatly away in a purpose-built lean-to that I constructed myself at the side of the building, and works seamlessly with both the traditional radiators in the bedrooms and the new underfloor heating system in the communal areas. I’m also expecting to receive regular payments through the domestic Renewable Heat Incentive (RHI) scheme, which is an added bonus!”

The second challenge was addressing the building’s ventilation. Because the property had not been very well-protected from damp in the past and had previously been used as an aquarium, ventilation was a key concern. Due to the fact that the stained glass windows don’t open, the solution was to install a heat recovery ventilation system.

Finally, the build experienced a lot of unforeseen expenses related to the age and style of the building. For example, the sandstone featuring of the church were badly eroded, so required a great deal of restoration work, the slate floor had to be excavated, insulation installed and a renovation of the spirelet. This all added up to a total overspend of 300%.

There was no time pressure for Martin, so the project became a fallback job for him as he continued to work fulltime. He dipped in and out, working for a couple of weeks and then coming back to it after doing a stint of paid building work. The conversion took about 18 months from start to finish, completed in May 2014.

From the outside the new home looks very much like a church, surrounded by the tombstones that created its original purpose. However, inside the chapel is a modern home, divided by a new mezzanine level, seperating the open plan living space from the ground floor bedrooms and bathrooms. Stain glass windows stretch across both storeys, with glass flooring allowing these features to remain uninterrupted. The upper level incorporates a kitchen, living room and dining space that sits up in the chapel’s beams.

Martin continues: “I’m absolutely chuffed with it. In my mind’s eye, I had a strong vision of a big, open staircase and that’s really come to fruition. It’s my favourite part of the house. When it’s dark and the lights are on – as we had LED lights in the treads and the hallway – it looks truly spectacular.

“The open-plan room upstairs works really well. When the sun is shining through the big stained glass windows, it casts colours everywhere and looks great. We’ve had a big 12-seater dining table made by a carpenter from old timber, and it fits brilliantly within the space. I also love the bathrooms.

A new lease of life

Before the project, the church wouldn’t be seen from the town as it blended into its surroundings – it was covered in ivy and blocked from view by big trees. But now that the ivy has been removed and the external stonework power-hosed, it really stands out.

Martin concludes: “It’s in quite a secluded location, but everyone who has come up to have a look has reacted very positively to it. We’ve had people coming up to look who say they had never even noticed the church before, even though it’s been there for 160 years!

“I really enjoyed the project and would love to do something like it again. The whole project was self-funded, so the money side of things was a worry at times, but I have no regrets.

“My advice to other self-builders is to make sure you have plenty of funds. Whatever quote you get, overestimate it by at least 20%. When you start something like this, you uncover so many things that throw up unexpected costs – especially with an older property – and once you’re so far down the line, you can’t just stop!”surfaced in cockle shells.

More in this category: « Radical restoration for pair of dilapidated listed barns Reinstated grandeur »
Login to post comments
back to top