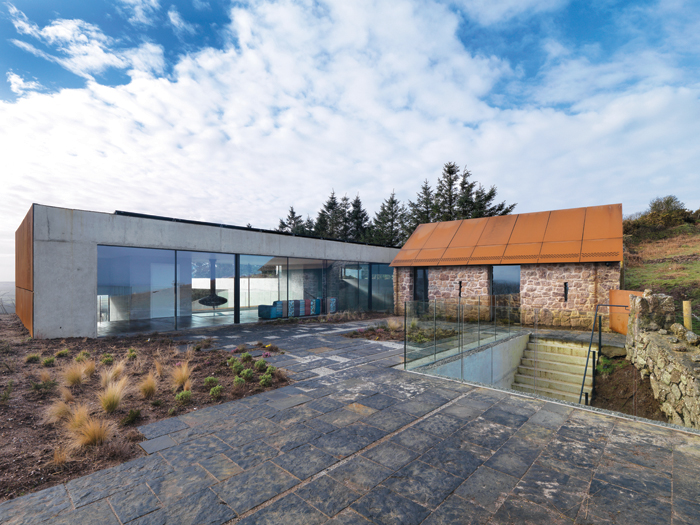 Within the rolling Welsh hills, surrounded by a picturesque Area of Outstanding Natural Beauty and near to the remains of a Celtic hill fort, sits Stormy Castle – a vision of environmentally sustainable homebuilding at its finest.

Loyn & Co Architects were approached by a young family to build a lifelong home in a remote, protected location in Gower, Wales. The site lies in an exceedingly sensitive rural location on the North Gower coast, on the edge of Natural Trust Land in an elevated position. The stunning remote location is proven by its status as a designated Area of Outstanding Natural Beauty, where the plot was home to a locally-loved farmhouse that looked over the landscape.

“We knew that this project could be controversial,” explains James Stroud, Project Designer at Loyn & Co. Architects. “Replacing a familiar farmhouse with a contemporary dwelling on a highly visible site in an Area of Outstanding Natural Beauty could be met with opposition. We tackled this head on by engaging with the LPA from an early stage to gain their support in addition to presenting the scheme to the ‘Design Commission for Wales’ (DCfW) and the local Community Council.”

Design proposals evolved following an extensive analysis of the site and budget, as well as presentations to the DCfW, Swansea Planning Authority and local Community Groups. In association with the Landscape Architects, Landscape Visual Impact Assessments were also undertaken.

James continues: “DCfW were highly supportive of our design approach and innovative proposal within a protected landscape. This meant we submitted the planning application with confidence, however, the proposal was a departure from Planning Policy and a difficult scheme to convey. In order to overcome this we produced a vast collection of drawings, models and documentation covering many aspects of the proposals to communicate the scheme”

The plans were accepted and the project was able to get going in 2012, two years after its conception.

The new home was conceived as three stepped ‘wings’ set into the landscape, following contours of the land, with much of the proposed dwelling cut and sunk into the sloping site to reduce massing, visibility and impact. This fragmented form evolved in response to the site topography, climatic considerations and orientation, combined with desired views, privacy, access and circulation.

The extensive landscaping scheme provides manicured areas close to the house, including a sunken secret courtyard offering a protected suntrap, with the remainder of the landscape being turned to wild hillside, meadow or heathland.

“The proposal was embedded into the hillside, using the natural topography of the site to create an earth shelter dwelling,” explains James. “In addition to the environmental and building performance benefits of this approach it also provided a site specific solution to the homeowners in terms of accommodation and the nature and scale of the home they desired.”

Principle materials selected for the project were in situ concrete, using ground-granulated blast-furnished slag – the only logical material for an earth shelter construction – with elements of Corten and glass. This combination gave the required low maintenance and longevity, whilst providing a raw, honest aesthetic appropriate for the site.

Concrete is widely used in the local agricultural buildings, as is rusted metal, which also tones magnificently with the rich brown orange of the surrounding bracken and landscape. Despite the initial high Carbon input this requires, the building will recover this over its lifetime principally due to the durability of the material and its effect on the future energy input.

“Our key challenge when ‘burying’ large areas of the house was to ensure it would be filled with volume and varying light throughout the day. Only in specific areas would you intentionally feel as though you were very embedded within the hillside to then be guided to another area of light and dramatic, ever-changing views,” continues James.

Having considered the optimum way of building into the hillside, the form has been designed to respond to the fall of the land, and recognising that the new house should respect the beautiful landscape setting. Flat green-planted roofs, which along with improving the insulation, also create usable terraces – another logical design decision.

The building uses a combination of highly insulated fabric including green roofs and technical systems to achieve extremely high sustainability credentials. Systems such as Photovoltaic Solar Panels, Solar Thermal Panels, a ground source heat pump, rainwater harvesting, wood-burning stoves, MVHR and a low energy LED lighting scheme have all been installed. Every specified element of the project was carefully considered for its environmental credentials and for its suitability to the extreme weather experienced at the plot.

In addition to the existing house, the site also originally had two stone buildings, an old goat shed sat on the boundary of the site and a former school house at the entrance. Both were connected by a stone wall that formed a boundary to the site from the National Trust land.

“Both buildings were of a local vernacular and we felt certainly worthy of retention,” says James. “The school house, where the farmhouse owners had once studied, now acts as a gatehouse and gym, whilst the goat shed is a cosy media room with arrow slit windows.”

The stone buildings were carefully stripped back, sensitively repaired in places and internally lined and insulated. A glass link connects the media room to the house and frameless glass windows fill the existing openings. Both structures have a new Corten roof, also used elsewhere in the project, echoing the agricultural tones found within the surrounding landscape.

At the core of the homeowner’s brief was the requirement to create a lifetime family home in order to bring the site into fulltime use by the family. The new home greatly reduced the visual impact to the surrounding area in comparison to the original farmhouse, which could be seen from five miles away. Linked to the stunning aesthetics of the new building, substantial landscaping using indigenous species and turning vast areas of the site back to its indigenous terrain. The site also includes a new bat cave in a secluded area as part of the mitigation proposals approved by the Welsh Assembly Government.

The finished home is a testament to the strong relationship between homeowner, architect and contractor and is a remarkable achievement for replacement buildings and housing within a designated Area of Outstanding Natural Beauty and for architecture in Wales.

Chris Loyn, Principal Architect at Loyn & Co, said: “I was thrilled to learn Stormy Castle had won this year’s Gold Medal for Architecture. While it had already been nominated for a number of industry awards and has won a RIBA regional award, this one was particularly special, as it shows we are achieving our aim of raising the quality of architecture in Wales, and flying the flag for Welsh architectural talent. While the beautiful Gower landscape was our biggest inspiration, it was also our biggest challenge, and our greatest concern throughout the design process was creating a home that would respect and work in harmony with its surroundings.”

This is a home designed for transition: to reflect the family’s changing needs, to settle and mature within its landscape and to suggest a new approach to sustainable, site specific, passive design in housing.

All images by Charles Hosea.