On the edge of perfection 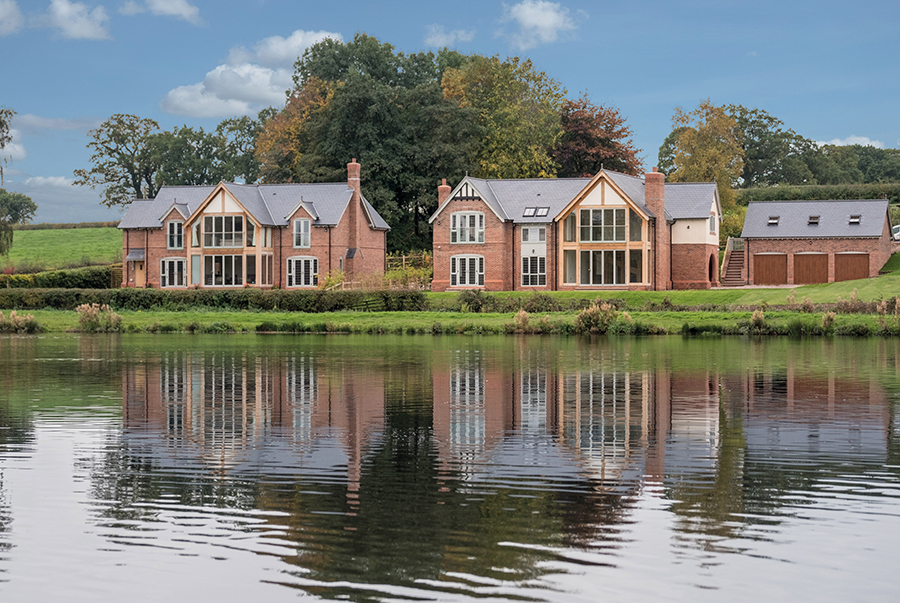 CB Homes has recently won a top industry accolade for its stunning lakeside development in Cheshire, on the site of a derelict country restaurant. The project, The Mill Pool, is a residential development of two adjacent properties, nestled beside a former mill pond in rural Cheshire.

Situated on the edge of the small village of Rushton in Cheshire East, the new luxury development comprises two five-bedroomed homes, each with a beautiful lakeside outlook. The project was a redevelopment located within the footprint of the former Mill Pool Restaurant site, which since its closure in 2014 had fallen into disrepair and was demolished prior to construction commencing.

The original restaurant site included outbuildings and a tarmacked car park, which offered a prime location for the construction of two waterside dwellings. The properties, Mallards and Grebe, have been designed with elegance and space in mind. Both incorporate such luxuries as underfloor heating on both ground and first floors, and windows and balconies offering unrivalled waterside views. The sense of space is reflected in the open-plan kitchens, with their top-of-the-range fixtures and fittings, while the lounges incorporate open fireplaces, a magnet for those cosy nights in.

A design for living

The new development is located in open countryside next to Mill Pool Lake, which is popular for fishing. It has an inlet and outlet to Sandyford Brook. There were no landscaping designations or Conservation Areas within the local area. None of the number of trees surrounding the site were protected and much of the boundary was native hedgerow. However, the designers were very mindful of the visual impact that two new-build residences would have on the area, and the trees and hedgerow were retained as a backdrop to the development.

The new designs had to be raised one metre higher than where the original restaurant had stood, in order for the two driveways to arrive at the ground floor level of each house without them being too steep. This also had the effect of raising the properties enough to allow generous glimpses of the lake, even from the ground floor windows and patio area.

The interiors are open and spacious, and the use of underfloor heating in both houses dispensed with the need for wall-mounted radiators and unsightly pipework. Underfloor heating systems require much lower temperatures to heat a room – compared, for example, with conventional radiator operating systems. This is due to the pipes being spread out across the entire floor, without compromising the temperature of comfort of the property, and thus providing increased sustainability and energy-efficiency. The absence of radiator units has increased the wall space available too, while the extensive use of glazing bathes the interior with natural light.

Both properties include such cutting-edge digital technology as CAT6 cable points at all TV points, which allows any PC to be hardwired into the home network. This combination of traditional with cutting edge makes The Mill Pool the epitome of modern country living.

The architectural style has used traditional designs and materials, in conjunction with modern, open-plan internal layouts and extensive use of glazing, to create pleasing internal and external aspects. The solid oak and glass gables to the lakeside elevation provide an attractive external feature that is visible across the lake, whilst allowing views of the water from both floors of the properties. The properties also include Juliet balconies to their master bedrooms.

Situated in approximately 0.2 acres, Mallards includes a garden accessed via bi-folding timber doors from the spacious family room. Grebe enjoys approximately 1.2 acres of grounds, again with the luxury of bi-folding doors, which open out to allow the garden to be enjoyed to its upmost. The development is also ideally positioned for the nearby village of Tarporley, with its range of shops and services – offering the peacefulness of country living with the convenience of village amenities.

It was of paramount importance to the project to avoid any water runoff from the site and this was addressed at the design stage. To protect the waterways, permeable paving was used for each of the approach driveways.

By allowing excess water to drain away into the natural soil or grounds, permeable paving was the most obvious way to ensure the driveways were sustainable and eco-friendly. The visual impact wasn’t affected, as permeable paving is as aesthetically pleasing as traditional options. During construction, particular care was also taken with fuel, which was pumped into machines via bund trays, to ensure that any spillage was caught and retained in the tray and could not contaminate the watercourse.

This attention to detail even extended to any accidental spillage from visitors to the site, such as delivery vehicles. Because of the open site’s sloping topography, and the fact that the houses were elevated one metre higher than the former restaurant building, sheet piling had to be used to stabilise the approach road. Given the site’s environmental sensitivity, great care was taken to ensure all Health & Safety aspects were constantly assessed, to mitigate against landslides, collapse or water breach.

In keeping with the project’s overall environmental considerations and to the benefit of the local natural habitat and its wildlife, bat boxes were built into both houses, and permanent nests for swallows and swifts were also installed in the eaves. The project has already won the Local Authority Building Control (LABC) award for ‘Best Small Development in the Northwest’ and goes on to compete against other regional winners in the national Grand Final of the LABC Building Excellence Awards 2019, which will take place at the Park Plaza Westminster Bridge in London on Friday 8 November.

Tweet
Rate this item
(0 votes)
Published in Rural Retreat
More in this category: « The Self-Build Diaries: Lindsey and Rik Goodman Character and charm »
Login to post comments
back to top