A Himalayan hideaway in the Highlands 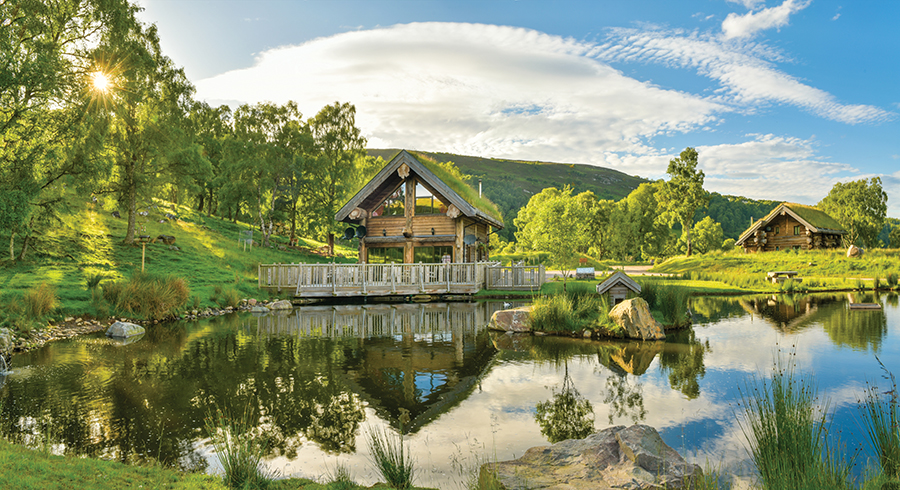 Mike and Pawana Spencer-Nairn left Jersey in the Channel Islands and moved to the UK in 2005 to realise a remarkable Scottish Highland experience in the wilderness. They created Eagle Brae, a sustainable ecotourism business with self-built bespoke log cabins – a true celebration of local craftsmanship. Due to their success, they’re now adding three more lodges to the current portfolio of seven, which are anticipated to be ready by the end of 2019.

After finishing his Sanskrit studies, Mike spent a gap year in India and fell in love with the Himalayas and his soon-to-be wife Pawana, whom he met in 1998 during a return trip to her home village in the Himachal Pradesh state, between Kashmir and Nepal, where her family runs a guest house. They married in Jersey and had two children, after which they returned to the Himalayas to build several properties and carry on the legacy of her family.

What started as a passion slowly turned into a business opportunity in the UK. Traditionally, the UK market had been oversaturated with standard kit chalets in tourist areas. As Mike’s family had owned 8000 acres on the Struy Estate, Inverness-shire since the 1930s, they had considerable building and developing experience, which Mike had inherited.

So Mike and Pawana seized the opportunity to create a luxurious hideaway located in the middle of the wildest glens, highest mountains and largest lochs in the region, putting a Himalayan-inspired self-catering destination on the map.

Mike says: “The original idea was to build a Himalayan village, replicating what we’d done previously. We wanted to call it the Himalayan Highlands but that plan was a non-starter as the local building control and planners made it clear that we couldn’t meet several regulations. At the same time, we weren’t able to get any of the craftsmen from the Himalayas over here as it was impossible to source visas. So we had to recalibrate our plan and opt for the best thing we could do from there. It turned out quite different in the end but I think it’s probably been the right decision. These log cabins have an extra wow factor and they’ll sustain throughout the years.”

Eagle Brae is formed of a series of seven hand-built cabins which enjoy their own patch of land and are private. They have an open-plan design, a living room, a kitchen and dining area combined under a cathedral ceiling and an upper-floor mezzanine with carved balconies. They also include a double bedroom and bathroom and some have an additional en-suite bedroom upstairs.

Staying true to their Himalayan roots, the lodges have been created with materials sourced from that region, as Pawana’s brother-in-law is a master wood carver so he and his team took care of the decorative panels throughout the cabins. Every single one is a work of art from the inside out, boasting traditional Scottish motifs. These display massive red cedar logs which are sourced from British Columbia and blend into the surrounding wilderness. Their names are all inspired by nature: Buteo; Loxia; Aquila; Tringa; Parus; Sylvia and Strix.

“We were very keen to celebrate local craftsmanship so nothing at Eagle Brae is made on the production line,” explains Mike. “Everything has been handmade, from the furniture, the kitchen units, the rugs and the tweed curtains to the chandeliers; which I made myself and are one-off pieces.”

Mike even liaised with Nigel Tyas Ironwork to measure and custom-make individual brackets and fixings for every single curtain pole in Eagle Brae’s seven cabins.

Before the project took off, Mike worked as a business analyst in the finance industry. He used his expertise to conduct rigorous due diligence through in-depth research, looking carefully into the options, having a very specific vision of the end result and sticking to the dream. He explain: “We’ve been heavily involved from the get-go and during the construction process we lived one and a half miles away in a local village called Struy, so we could monitor the progress closely. I walked around with a GPS, decided which cabin went where, designed the layout and the floorplan and came up with all the business ideas.

“The process took about eight years and we were ready to open in 2013. The first five years were spent on the red tape, surveys, planning and seeking grant assistance. The next two years were focused on the infrastructure. There was nothing here on site so we had to spend time putting in the roads, plots, sewage, draining, a hydro scheme to generate our own electricity and much more. The last year was for the actual building works.”

To be sympathetic with the surrounding wilderness, the cabins are self-sufficient utility- and energy-wise. Aside from introducing green insulated roofs and eco-friendly wood burners, Mike and Pawana also commissioned a proven diviner to identify their own water supply. Armed with two metal rods and a crystal, he located three borehole sites. They later drilled one of the sites and found water at the exact depth and yield expected. With the help of a pump powered by a micro-hydro turbine house submerged at the bottom, the water is treated and driven to the storage sites. The micro-hydro scheme also allows them to power a 75kW turbine for domestic electricity which is unobtrusive to the guests and the wildlife.

Although the accommodation is largely carbon-neutral, Mike and Pawana also took into account the fact that the visitors’ journeys will have a positive footprint so they introduced a carbon payback scheme which allows customers to compensate for the effects of their journey by planting a tree near the village.

In addition, the cabins are installed with their own efficient wood pellet burner produced locally for underfloor heating. These allow them to clean each ash pan just twice a year thanks to their almost 100% combustion levels.

For the three new log cabins, the foundations are already laid, the blockwork and the underbuilding have been done and the plots are already serviced as all the infrastructure was put in initially during phase one.

Mike explains: “The log work was commissioned in Canada and we’ve rebuilt the pieces here. The first storeys have just been completed and everything will be packed into containers at the beginning of March. Three Canadians will come over in April to help set them up but other than that, we’ll mostly do the rest of the work ourselves, including project management.”

Although they went over budget at the start, spending around £4.2m, they’re planning to take advantage of their current experience to lower the building costs during phase two. Mike adds: “This time around, we will be the main contractor and directly employ electricians, plumbers and all the other professionals we require as we now know what we’re doing and are taking a completely different approach, cutting out the intermediary.” This will also help them save on materials as they’ll be buying everything themselves.

More in this category: « How one couple met their self-sufficiency requirements when renovating a 300-year-old barn
Login to post comments
back to top