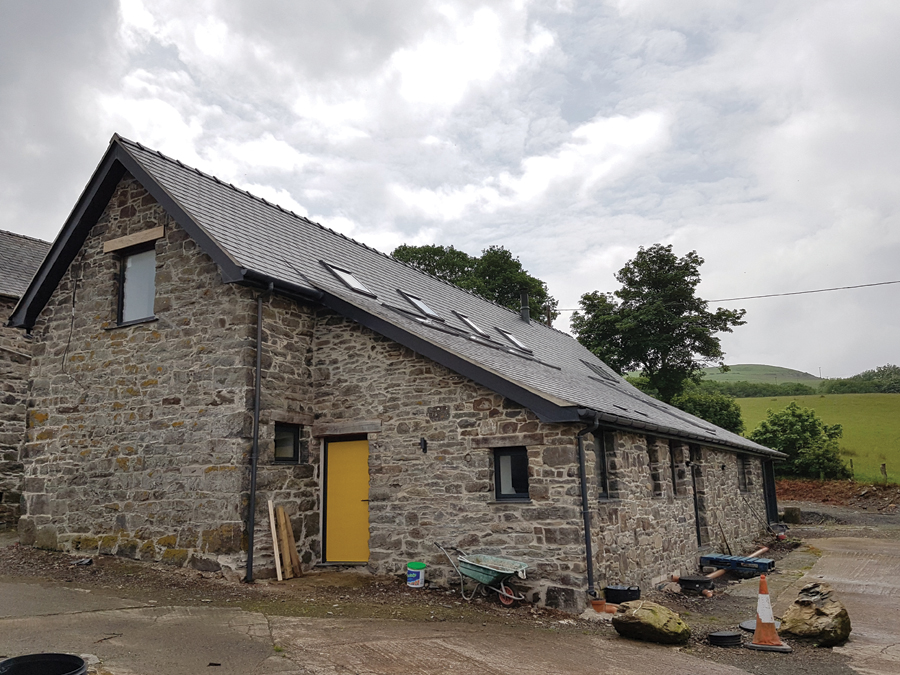 Whilst working in the Alps as a Ski Instructor and Mountain Guide, James Dealtry visited many of the luxurious chalets in the resort which blew him away. Their sheer beauty, and robustness, but also how well they fitted into the landscape really appealed to him, and he told himself that one day he would own his own mountain lodge.

Having grown up on the family farm, Geraint had always liked the barn which dated back to the 1700s and was keen to take on the renovation project. He explains: “Through my career as a Chartered Planner, I developed an interest in design and started dreaming about designing my own home. I knew the old barn provided me with the perfect opportunity to fulfil this dream, it was just a question of when the time was right. This time came four years ago when my wife Mererid and I decided to start a family and move back from Cardiff to the village in rural Montgomeryshire where we both grew-up.

“The building sits on the family farm Rhandir where I grew up, and I used to play in it when I was a child. It looks out over the picturesque arable farmland and dates back to the 1700s. Before the renovation, it had solid stone walls on three sides, with one side which had been left open to allow access for tractors and other farm machinery.

“We had to strip the barn back to a shell and rebuild it to current standards. There are no extensions, a portion of the lean-to element was rebuilt on the same footprint as the original, but the building has not been enlarged,” explains Geraint. “We wanted to build an open-plan family house that was affordable to run and heat. A key prerequisite was to retain the character of the building on the inside as well as the outside. This meant working within the existing ‘bay’ layout of the original barn, retaining double-height spaces and views through the whole length of the building. It was also important to orientate views away from the existing farmhouse that sits in close proximity to the barn.

“Because I had been thinking about the conversion for years, I had sketched out several options before coming up with the final design.The building is a traditional Welsh long barn, comprising a series of five bays that measure approximately 4 x 4m over a length of 20m. Each bay is divided by the original oak structure and we wanted to keep these beams visible with as few ‘cuts’ through as possible.

Geraint continues: “The format of these bays dictated the general layout of the rooms, however, the problem was how to connect each bay so that we could walk through the building without being confined to long, dark corridors. The solution was to retain two double-height bays at each end of the barn to let in light and keep the need for corridors to a minimum. Also, part of the ‘lean-to’ element of the barn was kept open from one end to the other which lets in a lot of light to the whole building.”

Geraint is a Planning and Development Consultant and has worked with Powys Council, Cardiff Council and the Welsh Government, so he knows how the planning application process works. The whole process went smoothly for the couple and they didn’t have any issues gaining planning permission for the development.

He adds: “We were operating on a low budget which meant that we had to do a lot of the work ourselves, with the help of our families. We ended up having our first child during the project, which meant it was more difficult to spend time on site.”

Being based in a rural area, the building had no access to mains gas, and the couple were reluctant to use oil, as they had racked up high fuel bills whilst living in a rented property with an oil boiler. They were put off of biomass by the thought of being at the mercy of fuel deliveries.Through the work he had done with a local housing association, Geraint had heard about ground source heat pumps and liked the idea of being self-sufficient. Having done his research, he knew that to make the technology as successful as possible, good design and installation were key. He found Gwres Glas online and was delighted to discover an experienced ground source heat pump installer just down the road. Rob Martin, who runs Gwres Glas, pointed the couple to the Kensa heat pumps that he had already installed in Llangadfan, and after speaking with the satisfied owners, they were keen to go ahead.

Geraint explains: “Mererid and I liked the idea of being self-sufficient. We managed to find a ground source heat pump installer, Gwres Glas, who was based just down the road. A few other people in the village were already using ground source heat pumps in their properties, so we went to speak with some of them. The ambition was to keep the house affordable to run, plus the availability of plenty of land, and the promise of payment from the Government’s RHI scheme, made us decide that a ground source heat pump was the best way to heat our home.

“The pump extracts heat from the ground using coiled slinky pipe laid horizontally in trenches underneath some nearby exposed land, normally occupied by sheep. The ground source heat pump, buffer tank and DHW cylinder are housed in a specially created utility room inside the property.

“We are delighted with it and have recommended it to other people. It’s been put to the test during the recent snowy weather and every corner of the barn has been cosy and warm. I think my father now prefers working in the barn rather than tending to the sheep because it’s so comfortable in here.

“We wanted to adopt a fabric first approach to make the most of the building’s original construction. We reused existing materials wherever possible, in particular for the visible part of the building. This meant insulating and building new internal walls around the envelope of the building, but the large internal stone wall separating the main barn and lean-to could be kept exposed.

“A steel frame was used to support the new roof and walls. We went with steel because my father has experience in erecting modern agricultural buildings and could put up the frame with the aid of another local contractor. This allowed for all the original oak frames to be retained and exposed for aesthetic purposes. The steel was also kept exposed in parts, to be in keeping with our approach of having the structure of the building on show wherever possible.

“I’m surprised how little steel frame is used in house-building, and I would recommend that others consider this as an option, particularly when working within an existing building as we were. It gives you a lot of flexibility when it comes to the internal layout and it can be erected quickly.

“The project took two years in total to complete and we managed the project ourselves. During the last stages of the build, we moved into the farmhouse with my parents to allow us to better manage the project. All in all, the build costs have fallen within the projected £180k budget. To cover the initial investment for the ground source heat pump and associated infrastructure, we applied for an interest-free loan of £10k from the Robert Owen Community Banking Fund, which provides capital for homeowners in Powys for home improvements and renewable technologies.

“The layout features double-height voids which allowed us to include a mezzanine level with a library. With 240m² to play with, there was plenty of space, so we’ve incorporated two generously proportioned bedrooms on each floor. Downstairs features an open-plan kitchen, lounge, office, utility room and snug. We love the generous split-level open-plan kitchen, dining and living area that includes a mezzanine space.

“Everyone who has seen the building loves it. There’s a strong sense of community in the area, so the fact that a young couple have moved home and saved an old barn from ruin was always going to go down well. People appreciate how we have kept the character of the original building, working with the original layout and not shoe-horned a new house into an old barn.

“We’re delighted with it but it is still not quite complete yet. The upstairs and landscaping still needs to be finished. In hindsight, I would have spent a bit more time designing the bathroom layouts. Although they work, I think they could have been better.” Geraint concludes: “My advice to people looking to take on their own self-build project is not to rush into it. Spend a lot of time planning, looking at plans and consider all options before deciding on the final design. Take as much time on the planning stage as you intend to spend in the construction stage. Then when you start building, don’t be tempted to change the plans, have confidence in the choices you’ve already made.

“Our initial plans went through several reincarnations before we ended up with the finished design, and we are very happy with how the building turned out. Because we thought about each part of the building so much, even the less successful parts we are comfortable with because we know there was a good reason for doing what we did. We have no regrets.”

More in this category: « A gorgeous post office renovation project A Himalayan hideaway in the Highlands »
Login to post comments
back to top