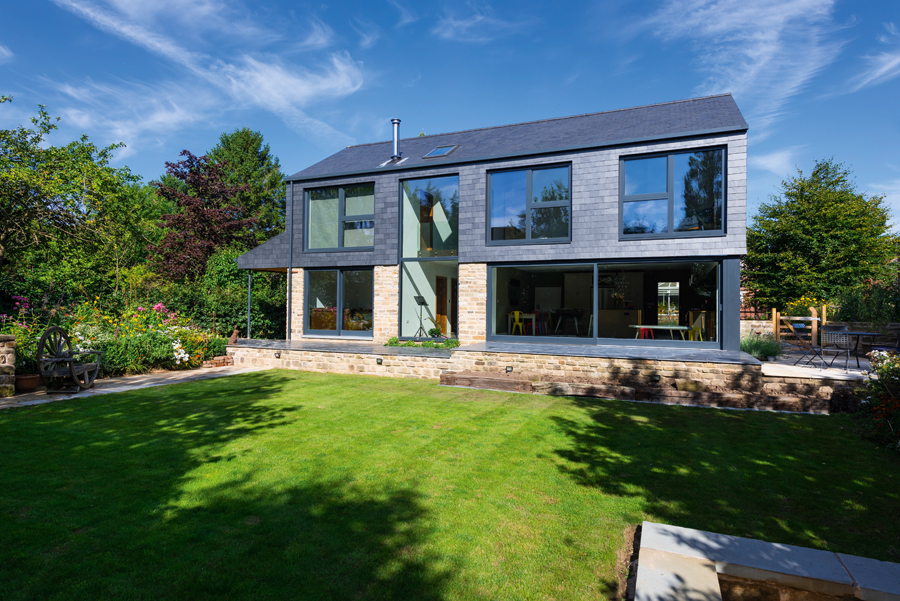 David Rodgers and his wife Elizabeth fancied an outdoor living style and self-building on an existing plot of land, while living in the on-site bungalow, offered them the opportunity to create a contemporary open-plan home in 2016.

This open-plan design connects the house to the rest of the garden and allows plenty of natural light to flood in. To increase their quality of life, they erected the property with eco credentials, lowering their heating bills and doubling the current value of the dwelling.

“We were looking for a piece of land to build a spacious new home in South Yorkshire as it had been a life-long dream to embark on our own project having previously built extensions and doing renovations. We finally came across a local bungalow with space in the back garden, which seemed perfect for our plan. We had previously lived in the area and were happy with its setting; it’s close to the school I teach at, is within driving distance from my wife’s school and it allowed us to self-build a property within the existing premises. We purchased it in October 2012 for £405,000 and lived in the existing dwelling for about two years, while waiting for planning permission and saving money for the building works. The project itself took 13 months to build from breaking ground to moving in – a reasonable timeframe,” concludes David.

The goal was to fit a 200m2 house onto the existing plot of land with one special requirement: “The property had to look like a bungalow even though it was a house,” comments David.

The Rodgers worked with Transform Architects to ensure that they made the most out of the space available and created intimate settings for each of the properties.

The ingenious solution which allowed the new house not to overlook their existing bungalow was to create a site-specific asymmetric design with a prominent roofline, where the front of the house is one and a half storeys tall and the south-facing rear is a two-storey place. Shortly after, planning was approved for a four-bedroom property which David’s two older boys, Oliver and Sam Rodgers, could live in until they were ready to leave home.

The process kicked off in December 2014, after lots of consultations with their architect and was completed in early 2016. David goes on to explain the building stages: “Although I was working full-time, I managed the construction process from start to finish. I was getting up early doors to speak to the builders, then after doing a day’s work at school; I was picking it up with them in the evening to plan the next day and sort out the materials required. I made use of all the evenings, weekends and holidays to do any work around the house, make my mark and save money through DIY jobs like raising and painting the walls, building the roof, handling the interior woodwork, installing made-to-measure doors, tendering etc. It’s a time-consuming process but is well worth it in the end as you gain ultimate control. There were no real challenging aspects of the build, we just wanted something different.”

The house now has a garage, a snug room, utility space and a 9 x 7m open-plan kitchen and living area, which is the heart of the property. Upstairs, they’re enjoying the comfort of four bedrooms, a large dressing room and three en-suite bathrooms.

To design the layout of the new house, they sat down with the architect and shared their preference for outdoors. With this in mind, the main living space was designed to allow plenty of light in. The house echoes an al-fresco living style through floor-to-ceiling windows, double-height glazed panels and sliding doors to connect the house with the garden. There’s also a contemporary cantilevered staircase which combines oak with glass to invite light to flow from one level to another. In addition, the first floor has nine rooflights and 3.3m-high ceilings.

Everything was oversized to feel like a natural environment. Although it’s very engineered, it’s meant to be lived-in too, as the practical aspects were placed high on the couple’s agenda.

David says: “I like being outdoors. I wanted a lot of glass downstairs so we can can feel like we're in the garden while still being in the house. It now feels like a conservatory inside, which is perfect for us. At night, when we leave the doors open and put the lights on, it’s just like being out in the open. We worked closely with an architect on the build but the landscaping was all mine – the structure of the garden is quite traditional with a contemporary twist. There are beech and lavender hedges, as well as lots of fruit trees and places to sit and admire everything. We also have a pond – I was never going to have another one but one day I had a rush of blood with my mini-digger!”.

To be sympathetic with the environment, the builders were tasked with using traditional materials. At the exterior, they worked with reclaimed stone and monochrome slate. Eco features are prevalent as well. All the windows are south-facing to gain as much solar power as possible. The masonry construction has high levels of insulation and a mechanical ventilation system was installed as well to provide fresh air into the household.

David adds: “We wanted an eco house but not because of its credentials. We chose sustainability for the quality of living it could offer. We created a super-insulated house and instead of installing solar panels and investing money into making energy, we invested into saving energy. We currently require heating only on the ground floor and haven’t made use of any radiators so far during the colder months.”

In total, David and Elizabeth spent £300,000 on the house, which was right on budget. This is now worth £750,000, which is more than double their investment. The existing four-bed bungalow on site is now rented out to international students who go to the school where Elizabeth teaches.

Although this house currently suits their needs, when thinking long-term, David ponders: “We have built all our lives to be able to move up the property ladder and in five years’ time, we might do it all over again.

“The property is everything we hoped for and more. It’s so easy to live here, with the air quality inside, the comfortable living temperature, having everything tidy and away and a spacious place to live that is flooded with light – there isn’t really anything we’d change. We would do the whole thing again at the drop of a hat – we are both inspired and bitten by the building bug. We’re actually looking for new land as we speak,” enthuses David.

“If you’re looking to self-build, just do it! You’ll need to give up a couple of years of your life but it’s so worth it!”