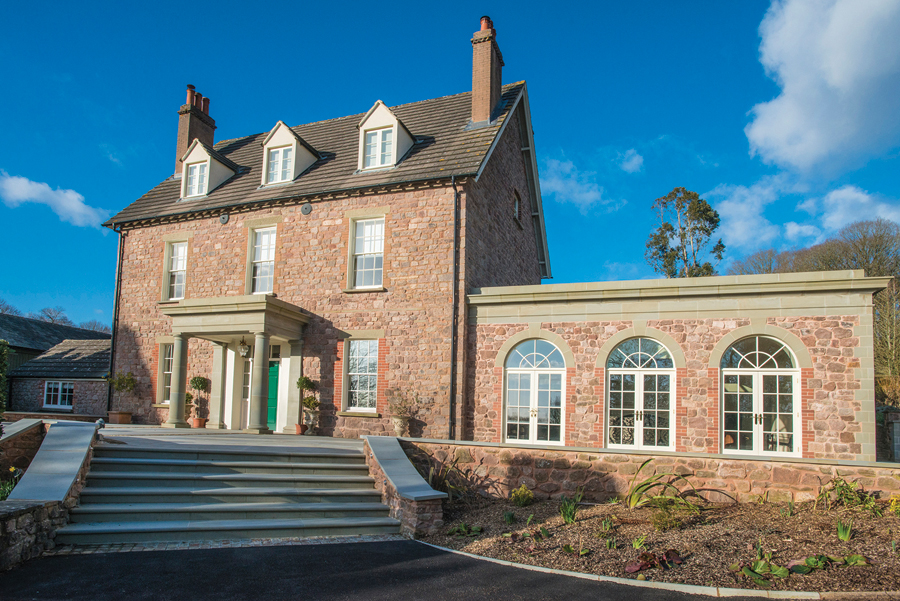 Forest of Dean Stone Firms has supplied a range of architectural and landscaping features for a private residence in the Wye Valley. The three-storey, Georgian house is now complemented by an orangery, portico and formal terrace crafted from Forest of Dean Pennant sandstone.

Having purchased the property eight years ago, the client wished to make sympathetic alterations to the exterior replacing a timber-frame conservatory and enclosed porch. The decision was also made to extend and redesign the terrace at the front of the property, an idea suggested by project architect, Potter + Holmes, Gloucester.

The client was also insistent on using local materials. “It is a substantial property,” he explained, “…and to use Indian or another imported stone on a traditional Georgian house just isn’t right. The alterations had to blend with both the existing property and the local vernacular. We had several architects who tried to sell us a vision of modern juxtaposition but we wanted to create spaces and features which looked like they had always been there.”

Forest of Dean Stone Firms and Barnhill Quarry were selected as a suitable source of material by the project manager. “Nick and the Stone Firms team were involved at a very early stage which proved invaluable. They provided guidance; there was clearly a great deal of knowledge and we felt very comfortable dealing with them. Nick actually advised against a cut-stone orangery, he wasn’t chasing the sale and we respected him for that.” The build and landscaping elements were supplied in phases to best suit the renovation process. Cills, entablature (comprising the cornice, frieze and blocking course), arched heads and quoins were first crafted and supplied for the 8m2 orangery. The cornice was profiled using a Radia CNC stone profiler and then hand-finished by the stone company’s in-house banker masons. The other features were all crafted using modern and traditional masonry hand tools.

A complex portico, formed from square pilasters, circular columns, cornice, frieze and blocking course followed. The columns were turned, and the entablature profiled also using the Radia CNC stone profiler, and then hand-finished.

To better place the property, the architect suggested a statement terrace, extending the existing patio to meet the adjoining paddocks, creating a dramatic entrance to the formal gardens. The team at Forest of Dean Stone Firms used their knowledge and ingenuity to design and craft bespoke features and embellishments for the formal terrace. It was the first time that the company used the outside of its Pennant sandstone block to create natural topped setts for delineation.

Using cut-to-size paving stones, the terrace was laid in Roman bond. An informal seating area features large format paving in a sunburst design. Each ray is alternated grey/green and blue, the naturally occurring tones of Forest of Dean Pennant sandstone. The year was water-jet-cut into the centre point, doubling up as drainage holes as the sun burst falls toward the middle.

A large, circular Pennant sandstone table was an addition to the scheme following the client’s visit to the stoneworks at Parkend in the Forest of Dean, where he saw a similar creation.

Forest of Dean Stone Firms recommended a stone masonry contractor for the fixing, W.R. Bedford (Stone Masonry) of Bristol. “The appointment of a stone masonry team rather than a standard building contractor was a stroke of genius. The guys had worked with Bedford previously and we were more than happy to accept their recommendation. The masons were on site every day for over 12 months. We simply couldn’t fault them.”

The orangery, portico and terrace later provided the perfect backdrop for a family wedding, off-set by strategic lighting and a shooting water fountain.

“Would I do it again? No, but if I were to, I would absolutely use them again,” said the client speaking of Forest of Dean Stone Firms and contractor, W.R. Bedford. “I would recommend them without hesitation.”

Forest of Dean Stone Firms’ Managing Director, Nick Horton, commented: “This project was a pleasure, from start to finish. Our design team thoroughly enjoyed the creative process, elaborating on the architect’s vision. The setts were a challenge for our production team but we are very proud of creating this bespoke paving detail for such a stunning renovation.”

More in this category: « How different floor types respond to underfloor heating Top 10 things to look out for when when installing home technology »
Login to post comments
back to top