A thermal energy storage system that meets the homeowners’ needs 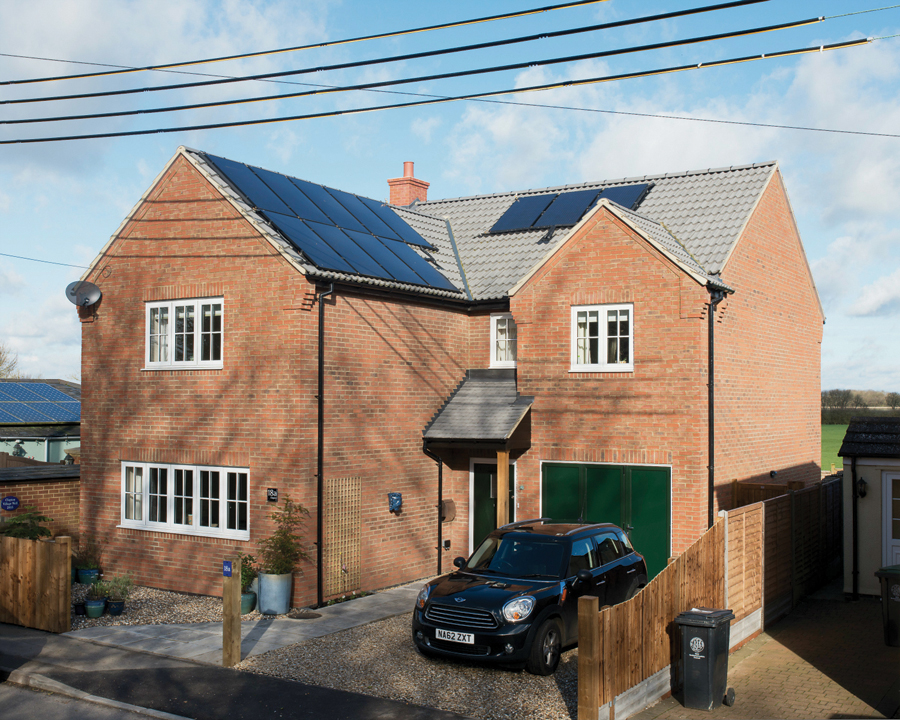 In 2014, Vince and Anne Esposito decided it was time to move out of their family home. Having always dreamed of living in the country, the couple started to look for home in rural Northamptonshire but struggled to find a house that met their living style and was within their price range.

The couple found a plot of land in the small village of Clopton and were offered a turnkey project, which could be adapted to their proposed design. As the project developed, it quickly became apparent that this option was unlikely to provide all the desired requirements and would involve higher costs than initially anticipated.

With no gas supply in the area, oil or electric was the only traditional option for the couple’s energy needs. The Espositos ideally wanted to find a renewable energy system that would be efficient, cheap to run and could be installed into the new plot around their design. The couple came across Leicestershire-based housebuilder, Caplin Homes, which specialises in energy efficient homes.

Caplin Homes has recently developed a technology model that can meet a home’s full annual heating and hot water requirements using solely solar energy. A thermal energy storage system, the Earth Energy Bank (EEB), is installed within the foundations of a building and operates in conjunction with a water-water heat pump to extract heat from the earth for use within the building.

The EEB is designed to be pre-warmed using surplus thermal energy from a solar array, which can be drawn upon in winter via the heat pump. Consisting of a matrix of boreholes, that are just 1.5 metres deep, the EEB does not need the deep trenches or long ground loops of traditional systems.

The Espositos were particularly impressed by the innovative use of a complete heating package, and approached Caplin Homes to discuss their plans in further detail and the decision was made to go ahead with the zero carbon solution approach.

After receiving planning permission in January 2015, work commenced on the ground works in March. The EEB consisted of 28 boreholes, which were constructed within the building’s foundations. Once the ground works were complete, including the sewage and drainage systems, work could start on the timber frame structure.

Once the brick exterior and roofing were completed, 12 PV-T panels were installed on the roof of the new house, which when connected to the heat pump and EEB would be capable of supplying the couple’s energy requirements all year round.

The heat pump, one of the main components of the zero carbon solution, required careful consideration for this project. A 6kW heat pump provided by industry specialist, CTC, was chosen for its efficient design. The CTC 406 heat pump has a modest hot water requirement, built-in DHW tank and requires no central heating buffer tank, making it very compact.

To further improve the property’s efficiency, Caplin Homes has also incorporated a rainwater harvesting system into the property’s design. This, along with a newly rediscovered working well on the plot, would help the couple to rely less on mains water.

More in this category: « Use timber frame to deliver a weather tight build, on schedule and on budget Caesarstone explores the current trends in kitchen worktops »
Login to post comments
back to top