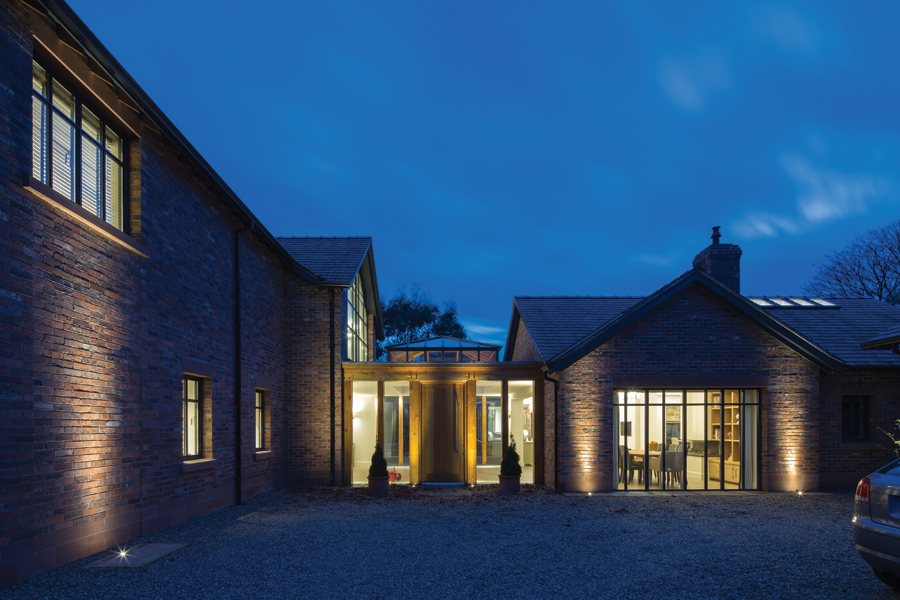 How can light be applied to the facade of a house to create a certain mood, give it an identity or provide a focal point? It can be applied in a number of ways via different types of application methods and by using a variety of spot, linear or flood luminaires.

A successful surface-mount application is often where the luminaires are integrated into the architecture; the detailing of the building allows the luminaire to be hidden, so by day the house can be appreciated without the visual intrusion of luminaires, but by night, the artificial lighting brings your self-build to life, illuminating, what may appear as, a dark and vacant space.

Ledges, or architectural details, can create long dramatic shadows that may have previously been unseen, these shadows can be reduced by using a lower output luminaire or by adding a lens that will soften the lit effect.

If opting for a continuous linear graze up – or down – then careful consideration should be given to the specification of the linear luminaire to ensure there are no shadow gaps between one luminaire and the next when butted up to each other – this is critical to a achieve a continuous wash of light and give your new home that sought-after aesthetic.

Like the other applications, a recessed luminaire can be in a linear, spot or flood format. To ensure the lit effect is focused upon the building and not the night sky, it is important that the luminaires are adjusted on site or supplied on a set tilt to ensure the desired lit effect.

Recessed luminaires are often used as one of the ‘layers of light’ within a scheme, integrating the luminaire at ground level to help frame your building and combining this with surface-mount luminaires mounted at the next architectural soffit to pick out and frame your house at a higher level – this can often be the case to avoid long dramatic shadows too. By incorporating layers of light, the character and identity of your self-build will be defined.

Surface ground-mount luminaires, when offset, can help to provide either a uniform flood approach to your home or landscape; or with different optics and outputs, it’s possible to pick out specific details of the space, allowing the centre of the beam to provide a focus and the peripheral beam to graze other parts of your building. Surface ground-mount luminaires, if offset sufficiently from a building, allow you to catch and pick out the sloping angle of your roof.

Delineation can include points of light, lines of light or integrated light, where people see the lit appearance of the source rather than the projected light.

Where this type of application is used it is often associated with a dynamic lit effect, of changing colour, of shimmering light – it is about bringing attention to your self-build.

For large-scale self-builds that stand against a dark night sky, they often only need a minimal amount of light to have maximum impact – an integrated approach is often preferred as lighting the facade from the ground or roof tops can mean a high quantity of very high powered luminaires that can result in light pollution and sky glow; an integrated solution can provide a more individual approach to the scheme. Applying the light this way can also mean easier maintenance in the long run.

More in this category: « What you need to know about wood-burning stoves The contaminated land assessment process explained »
Login to post comments
back to top