Oak-frame home office gives couple a room with a view 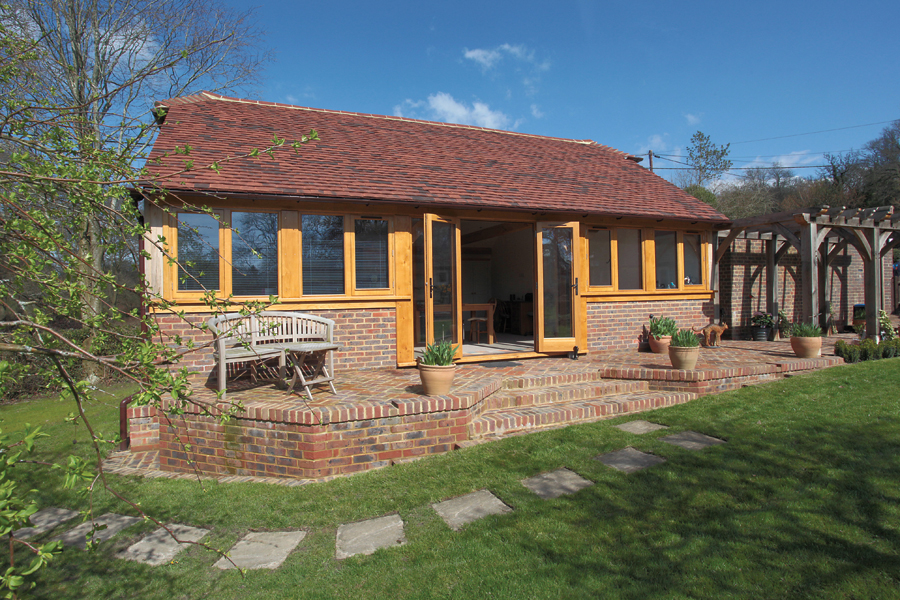 Nestled in the heart of the Sussex countryside stands a 16th-century cottage, complete with 10 acres laden with hidden treasures. The soon-to-be-owners of the property fell in love with the cottage immediately, blown away by its period features and charm, albeit its slightly modest size. As the years passed, the couple gradually extended the cottage, sympathetically adjoining more liveable space onto the property.

As a landscape architect by profession, the owner naturally aspired to create something spectacular in the ample grounds that surrounded the couple’s beautiful period cottage. An intricately-detailed herb garden and man-made lake were among the many attractive features – until recently, when a further project added more to this designed landscape.

Situated next to the cottage’s detached garage was an old derelict shed. Originally it had served as an office when the owner’s design practice was first taking off. As the family expanded, the shed became a playroom, then as the children grew up, it stood unused and fell into disrepair. It was this shed and its location that became the perfect starting point for ‘The Studio’.

Oak framing was always going to be a concept that the couple explored for the new venture. The oak beams were what had drawn the couple to the cottage initially, so it felt a natural decision to continue the theme as part of this collection of buildings. In searching for suitable frame manufacturers, the couple came across English Heritage Buildings.

The brief for the building revolved around a light and spacious working environment. It also needed to be big enough to house a small shower room and kitchenette. The primary purpose of the building was to provide a dedicated home office, however, the couple were keen to explore a self-contained unit should they need to accommodate guests in years to come. Having collected many books over the years, the couple were also passionate about housing a special library area within the studio.

The footprint of the building was settled at 6 x 9m. Thanks to there being an existing building on the desired footprint, planning for The Studio was passed without any issues. This, in part, was helped by the specification of an oak frame, which was looked on favourably by the local council.

The existing shed was soon demolished and the groundworks commenced through another local company, Custom Build, which was recommended through English Heritage Buildings.

Careful consideration had to be given to the groundworks due to the gradual slope of the site. An intricately-detailed paving formation dealt with level changes and was laid alongside The Studio. Overhead – as a subtle way of connecting the studio to the main house – a pergola (also provided by English Heritage Buildings) was erected. This, again, reinforced the need for precision in the initial planning and preparation of the groundworks. As the frame was erected, the landscaping immediately followed. This enabled all works to mature and develop with synchronicity.

In the original plans, it was found that at one gable end there was a significant amount of wasted space. At the appropriate height, a special barn owl hatch – which complied with the Barn Owl Trust’s precise specifications – was created to encourage nesting.

In order to complement the stunning hues of the oak frame visible inside the studio, oak joinery was specified throughout. The south west-facing elevation was fitted with mullion-style glazed doors and four sets of mullion-style windows to not only allow in plenty of light, but to also make use of the afternoon sun and take in the stunning vistas of the garden.

Above, two automatic, weather-responsive VELUX skylights were fitted to promote ventilation and, again, enhance the natural light in the studio.

Great attention to detail was given to the electrical systems in the self-contained studio and the owners thought carefully to ensure these were properly integrated into the whole building. Underfloor heating now acts as the sole heat source for the building powered through an energy-efficient combi boiler. This boiler also delivers all the hot water to the washroom and kitchenette.

In terms of design and interior styling, the couple opted for a modern, refreshing scheme with minimalistic furnishings and soft shades, in contrast to the period charm of their relatively small cottage they have lived in for the past 40 years. This stylish theme, combined with the authentic twists and cracks of light green oak, have proved to work in harmony as the couple continue to establish their work setting.

Overall, the owners are happy with their decision to embark on their first oak frame project. Commenting on their experience, the owners explain: “Both contractors, Custom Build and ECJ (English Heritage Buildings’ approved carpentry contractor), worked exceptionally well together to create a product that was crafted and manufactured beautifully off-site. I would not hesitate to recommend English Heritage Buildings to anyone considering an oak-frame project.”

More in this category: « Timber frame construction: create the perfect outbuilding Why every self-builder should contemplate adding bi-folding doors to their project and looks at one couple who did just that »
Login to post comments
back to top