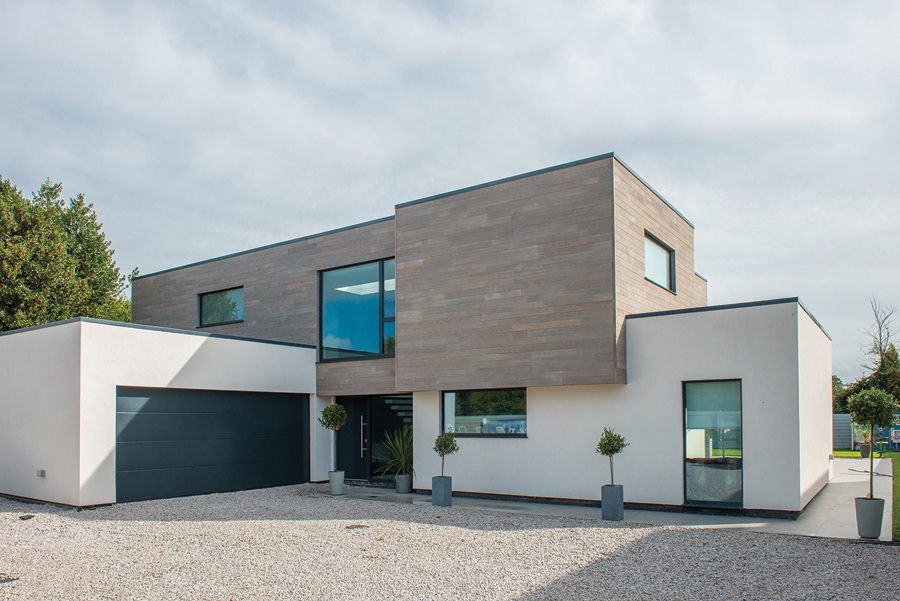 Driving through a village just five miles outside the cathedral city of Hereford, a modern, Cubist building peeks unassumingly over the top of a grey-wash fence. Metal gates offer privacy from passers-by and visitors to the Victorian Gothic pub over the road, while an expanse of glass gives a tantalising glimpse into the upper storey. This is the striking, new-build home of Business Director, Tom Webb, his wife Nicola, and their young family.

“We’d built our own home once before and looking back through rose-tinted glasses (and forgetting all the stress!) we fancied doing it again,” says Tom. The couple had previously self-built in Hereford five years earlier but the project already had detailed plans approved so they were limited as to what they could change. This time, “…we wanted to be in a village but close enough to Hereford that it wasn’t an onerous journey in and out, particularly with two young children and all the taxiing around that it brings! We found a plot in a village just outside of Hereford – it was due to go to auction but we managed to agree a price with the vendor prior to this,” continues Tom.

Put a stamp on it

The plot was purchased with outline planning, “…so we could put our stamp on it. We had the support of the local planning officer with our modern design which helped,” says Tom. The plot was large and level, plus it was in a convenient and peaceful location, adjacent to the village hall and playing fields.

With their prior self-build experience, the couple had no qualms about the practicalities of another project. The site was just 15 minutes away from Tom’s work and en route, so he could project manage the build. “I could call in each morning and always pop to site if anything needed organising. I’ll admit I’m not the most hands-on person when it comes to DIY (and self-building is effectively extreme DIY!) but I am good at researching and organising,” says Tom.

As well as the modern style, Tom and Nicola wanted the house to centre around the large open-plan kitchen/dining/sofa area and for the bedrooms to lead onto a balcony with views out to the Herefordshire countryside. “We chose our Architect, Jim Hicks of OHA Architecture, as we had seen some of his work previously which had the modern, Cubist approach we liked,” says Tom. “We met with him to discuss our project and, armed with lots of Pinterest images, started to plan the style and layout we wanted.” OHA Architecture responded with a generously-sized, modern family home comprising a flat-roofed design to maximise internal space and minimise building height.

Tom turned to timber frame specialist, Taylor Lane, to help create his dream home. “The style of the house very much leant itself to timber frame construction,” says Tom. “I approached around five timber frame companies and, of those that responded, Taylor Lane was the most competitively priced, had good service (they have a dedicated self-build manager) and were very local.”

Taylor Lane is a Hereford-based timber frame company that has supported self-builders for more than 35 years. Tom appointed the company to design, manufacture and erect the 140mm timber frame kit. Metal web joists were used to construct the floors, balcony and flat roof; Taylor Lane uses the Mitek Posi-Joist system.

“We wanted to achieve the best energy performance we could, while obviously balancing it against the impact on budget,” says Tom. The Standard Assessment Procedure (SAP) calculation generated the U-value required. Taylor Lane designed a package to meet the best possible energy performance – 0.15W/m2K, equal to Passivhaus requirements.

The 0.15W/m2K U-value was achieved using 120mm insulation between the 140mm timber frame stud walls, with an additional 30mm rigid insulation on the inside face. 25mm timber battens then formed a service void – an extra air gap to aid thermal performance. The service void allows the self-builder to run cables and piping through without puncturing the Vapour Control Layer (VCL) or insulation.

The property benefits from triple glazed windows, excellent airtightness and mechanical ventilation with heat recovery system. The flat roof also houses an array of roof-mounted solar panels – these can be directed exactly due south for the best performance while remaining concealed from ground level view.

Another feature that Tom and Nicola wished to incorporate into the house was a floating staircase. “After discussing this with Taylor Lane, they spoke to their in-house engineers and steel fabrication team and came up with a design that incorporated the necessary steel structure into the timber frame,” continues Tom. “This made it much easier than trying to organise a third party to undertake the work later.”

Where the staircase is positioned, the standard timber frame wall was replaced with a steel frame structure with a diagonal steel beam running the length of the staircase. Steel runners were then welded to the beam and decorative oak ‘steps’ were slotted over the runners to form the stairs. Designed and fabricated by Taylor Lane’s dedicated steel department, the steel structure was constructed on site for accuracy – the staircase must meet the first-floor level spot on.

“Self-building is stressful, there’s no denying it. When you are project managing, there are always issues during the build but when you move in and look back, you quickly forget about the stress and challenges and start to enjoy the house,” says Tom.

“The team at Taylor Lane were great to work with throughout – from initial meetings with Padraig Hurley, right through to the CAD Designer who produced the exact drawings of the frame, Jake Underhill; and the guys on site who put the frame together – Darren Gumbley and his team.”

The result is a striking modern house filled with natural light and featuring far-reaching views across the Herefordshire countryside. It more than lives up to Tom’s expectations. “Our favourite spaces have to be the open-plan kitchen/dining/sofa area – with a young family it is very much the hub of the home, where everything goes on; and the entrance hall with the large skylight and floating stairs.”

More in this category: « Amanda Green takes a look at why you should consider clay tiles for the roof of your self-build Martin Moore rearrange a kitchen to include stunning views »
Login to post comments
back to top