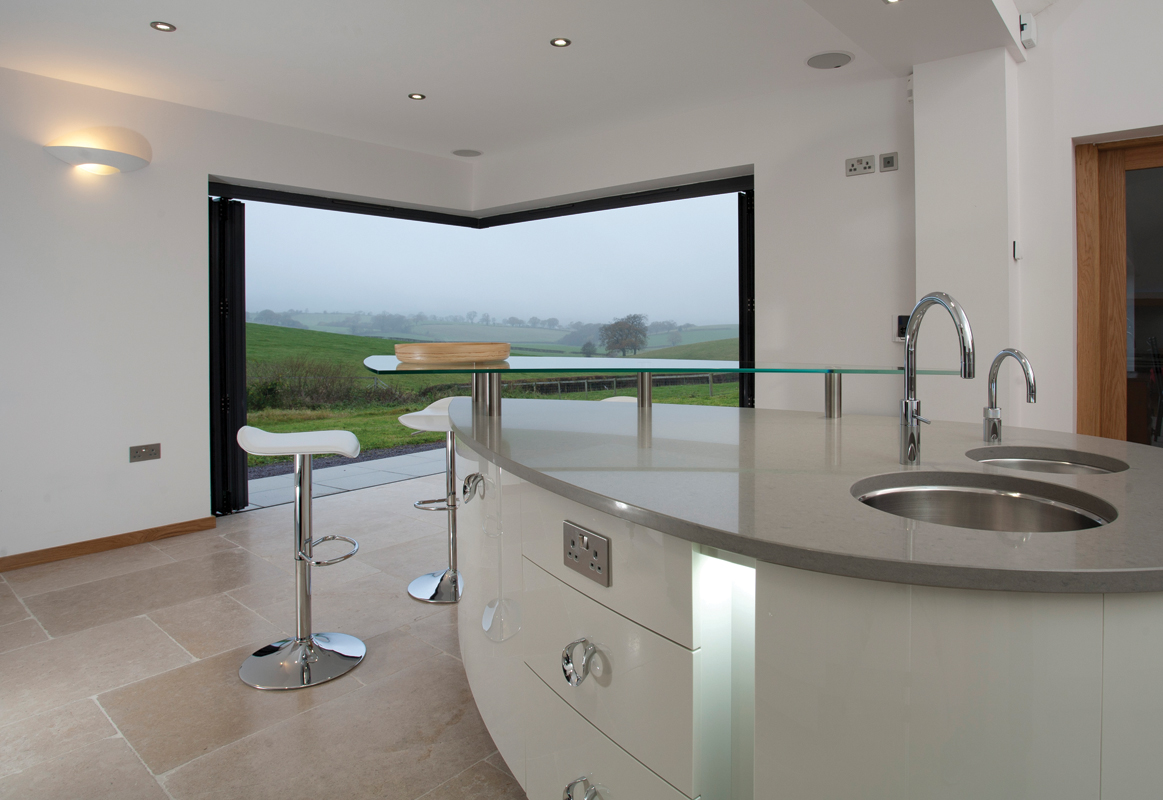 When Perry and Christina Vann purchased an agricultural property in north-west England, they had grand plans to bring the building back to life, with all the latest mod cons. With panoramic pastoral views of rolling grasslands, the Vann’s principal priority was to preserve their view of this landscape with a design that framed the scenic countryside.

Settled in one of England’s most striking mountainous regions, Cumbria’s Lake District, this brick-built period barn was formerly employed as a cattle shed. Today, however, the structure is far from the dilapidated structure that once stood in its place.

Perry and Christina had an ambitious master plan to extend this barn to accommodate a futuristic kitchen – inclusive of modern luxuries – in which the family could dine whilst taking in the breathtaking panoramas of the neighbouring Cumbria countryside. The Vann’s strategy was to frame these views and fuse them with the internal environments of the barn; drawing the outdoors in. Talking exclusively to i-build, Christina said: “We looked to home renovation and self-build magazines for inspiration for the extension of our barn. We read through converters and renovators’ stories and took clippings of designs we were fond of.”

The celestial design of the kitchen itself is the masterpiece of Conwy-based designer and maker, Andrew John Lloyd Kitchen Designs. The astronomy-inspired scheme adds the contemporary touch that the Vanns sought from their extension. Boasting envious views and a contemporary design, the kitchen now acts as the hub of the home; providing the Vanns with a place to dine, socialise and entertain in. To obtain these continuous sceneries from the comfort of their heavenly kitchen, Perry and Christina sought a solution that would grant them with uninterrupted glazing enabling the pair to seamlessly marry the external environment of the barn with the internals of the kitchen. “The doors had to reveal an unbroken scene out to the spectacular views of the open countryside when opened from the kitchen to the patio,” reveals Christina.

Having come across an advertisement in The Telegraph magazine for conservatory supply and installation company Apropos, Perry and Christina approached the company with detailed plans for their extension. After examining architect’s drawings for the extension and, after several face-to-face discussions surrounding design and constructability, Apropos suggested a set of corner bi-fold doors to open up the views from the kitchen extension.

Apropos’ designers worked alongside Andrew John Lloyd Kitchen Designs to mirror his futuristic kitchen furniture recommending a set of corner bi-folds that meet at a 45º angle to let daylight in, show off the elegant kitchen design and bring the outdoors in.

There were very few obstacles throughout the duration of the build, as Christina explains: “We didn’t come across many hurdles as the design phase and tendering process took 22 months. I deliberately chose a longer-than-normal timescale to address detail and risks. The only surprise was that the original foundation slab was not as per the intrusive survey prior to the build. After this issue, early on in the construction phase, there were no significant surprises.

“Planning was also rather reasonable. I employed a local architect who had the relevant experience of the local PA and had built up an established relationship with them. They were actually quite pleased with the conversion on completion and wanted to show their relevant staff what could be achieved.”

The result is a cutting-edge kitchen and dining area, using only the highest quality craftsmanship and materials. The Vanns now use this space with pride and enjoy entertaining friends and family. Christina concludes: “Overall, I’m very satisfied – the construction met the conceptual and detailed design specification fully and, of course, we got to live in a beautiful location with the most impressive rural views from our home, with continuous views of the sunrises and sunsets each and every night.”

More in this category: « Roofing and cladding system enables homeowner to separate the old and the new Five top tips for specifying glass on a self-build »
Login to post comments
back to top