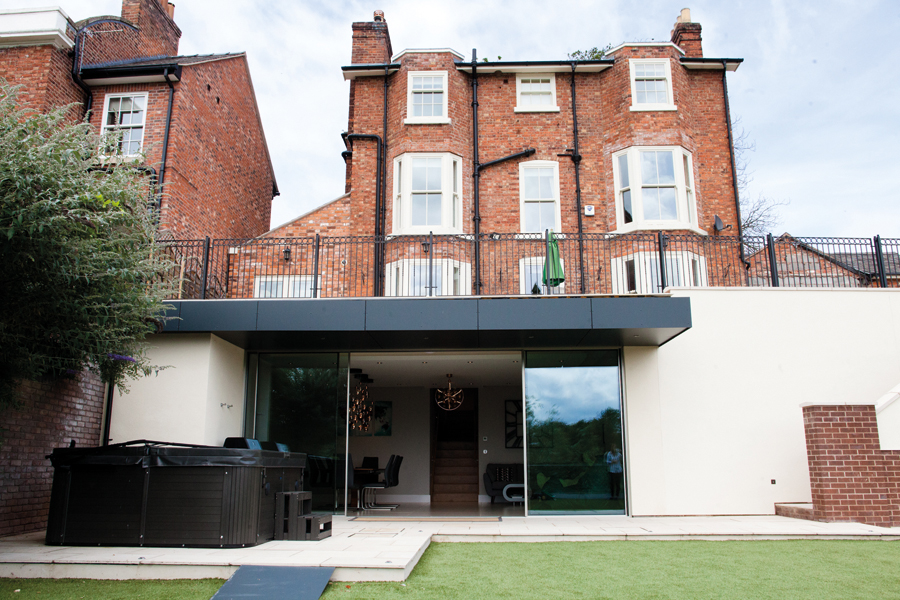 Basement conversions are a great way to add space to properties where outdoor space for extensions is limited. This is the procedure that Simon Cassidy opted for when he sought to create extra living space for his family’s growing needs. Having lived in their Georgian home for 11 years, the Cassidys decided to improve rather than move.

The Cassidy’s riverside property in Shrewsbury has been given a new lease of life by Morris Property. The basement conversion has created extra living space with multi-level games and entertainment spaces and a garden renovation.

Working closely with the Cassidys, Morris Property delivered practical solutions to bring the project to life, including a tri-level garden on a steel frame to ensure the children have a level surface to play on. Morris Property also suggested laying astroturf as opposed to traditional turf for the garden due to its lighter weight on top of the garden’s framework.

The home has been renovated to a high specification, incorporating building improvements, the implementation of new high-tech systems – including a cinema room and smart lighting – as well as landscaping to the external areas.

Bicton-based Morris Joinery also provided its expertise and services with a new oak staircase and balustrades leading down into the modernised cellar.

The Cassidys personally designed the interior of the property, incorporating the practical needs of the family with modern, luxury living and furnishings bringing to life the renovation they had been planning for some time.

Exclusively talking to i-build, Simon Cassidy reveals the ins and outs of his Shrewsbury home renovation.

Had you always wanted to pursue your own project?

Not really, we had looked at moving but couldn’t find either the right house or the right location that gave us everything that we wanted, so we thought we’d improve what we had as it ticked most of the boxes anyway.

How did you combine the original building’s style with the extension?

Basically, we decided to completely contrast styles. The current property has been completely refurbished over the 11 years we have lived here, but in a style that complemented the age of the house. However, with the extension, we went for a much more contemporary feel, with straight lines and a minimalistic feel.

How long did it take to gain planning permission?

12 months. It was a nightmare as we live in a conversation area so it was a lot more difficult than I had bargained for.

Were there any challenging aspects to the project?

I guess the biggest challenge was access because all the work was around the back of the house which banks down to the river, giving no access from below. Therefore, everything had to come over the house or down a huge trench/ramp which was built using large excavators from the 500 tonnes of soil/sand in the ground which was dug out.

Did you work with an architect at any point in the process?

Yes, I worked with local architect, Batch Valley Design, who is also a friend of mine. He was a great help, not just in the design but in interpreting what I wanted.

Are there any particular materials that you would recommend to others looking to renovate or self-build?

Yes, but depending on what they are doing and their budget. I would certainly recommend using astroturf, glass balustrading, engineered oak and self-levelling concrete – if appropriate – but remember that the latter takes longer to go off than traditional concrete.

How long did the project take?

The project took 13 months from start to finish, with the original schedule being eight months so it did take significantly longer than we originally anticipated. However, we did extend the footprint of the new build and altered the link from the existing kitchen.

When was it completed?

We lived on site throughout the whole process, which was not as difficult as some of the work we had done before as it didn’t form the main part of the house. Morris Property did a good job of boarding up the external walls leading to the new extension but, inevitably, some dust still found its way into the main house. It did have more of an impact towards the end of the project when they moved into the kitchen area which was the link from the existing house to the cellar extension. Another challenge was having all the various trades on site at the same time; or should I say their vans, which could be up to four or five parked on the drive. Together with the welfare unit that was on the drive for them, it was getting congested, to say the least. In fact, it was so busy I would move mine and my wife’s car onto the road each morning to allow them to park on the drive. Then, one evening I forgot to move mine back onto the drive and it was hit by another car and written off.

Did you remain within the original budget?

The original budget was blown out of the water by a number of contributing factors:

1. The whole job hadn’t been thoroughly planned as well as it could have been all the way through
2. We had to spend a significant additional amount of money in underpinning the property and then had to underpin the underpinning, which we had no choice but to do
3. Some of our specification changed throughout the build and added extra costs and time
4. However, the biggest cost was overrunning in the time frame we had set ourselves. Lots of small things that add up and add a lot of time; and as we know, time costs money.

Can you give us an overview of the interior and exterior finished space?

As the project evolved it became three separate projects. The first was completely ripping out the old cellar space which was part of the original house and transforming it into a cinema and games room. The cellar was made up of four small rooms so we removed them all to create two separate areas (cinema and games room). This included damp-proofing/tanking all the walls and laying a new concrete floor which was overlaid with an engineered oak floor and new plasterboard on the walls and ceilings. We also had a state-of-the-art automated lighting system installed so we can control all the lights from our iPhones or iPad. We can even create scenes so that when a movie starts, it automatically dims the lights. It even turns them back on if you pause or stop the film.

The second part was to create a large living space that we could entertain in. This includes a sitting room, dining area, bar and bathroom. The main focus for this was that it would be for the whole family to use and encompassed the newly-built garden space with a free-flowing transition from the inside to out. This was achieved by fitting floor-to-ceiling glass sliding doors which cover the entire width of the room.

Finally, the garden was refurbished and this was where the project really began to take shape. This changed from three terraces (two of which were unusable) into a large area for the kids to run around and play together with a glass balustrade so we could make the most of our fantastic river views. We also added a new patio with a hot tub for use all year round.

Is the finished space everything you hoped it would be?

Yes, and more. We still have a few things to add, but the amount of pleasure we’ve already enjoyed this year far outweighs the pain of the build. I would like to have come in a bit closer to the budget, but we always knew that this was a lifestyle choice, not a money-making project.

What’s your favourite room and why?

My favourite room is the cinema room. I remember when we first bought the house in 2005; I dreamt that I would convert the then damp, dark and unsightly cellar into what we’ve just created and the kids love it too. We all have our favourite movie posters on the walls and they watch movies with their friends or I invite the boys around for the ‘big fight’ or footy match with a few beers. I love being the host and this way I don’t even have to leave the house – perfect!

Is there anything that you would have done differently?

If I had my time again I would have made sure that we’d planned better and had a schedule of works from the start, but you live and learn and the pain and expense soon drift away after a few great parties and the enjoyment the kids get from it.

Would you do the whole thing again?

Yes, but I’ve learned a lot from this process so I’m confident that I would do a few things differently. Whilst we feel the end result is great, we could have done things in a better order to save time and money.

What advice would you offer to anyone looking to renovate or self-build?

Make sure you plan, plan and plan again. The devil is in the detail, so it’s vitally important that you get everything lined up and your specification decided on prior to starting the build. Whilst we did invest in using a great team – including the main contractors, architect, structural engineers and tradesmen – if you haven’t planned everything, and in the right order, it can start to cost you time and money. Secondly, stick to your guns; if there is something that you want and you’re told it can’t be done, research yourself and persevere. It’s amazing what you can find out online and then all of a sudden it can be done. Finally, engage with the guys on site, and not just the project manager. Whilst he/she can give some great advice, I found that the tradesmen equally came up with some fantastic solutions to problems that occurred during the build.

More in this category: « Top tips for taking the stress out of the moving process Roofing and cladding system enables homeowner to separate the old and the new »
Login to post comments
back to top