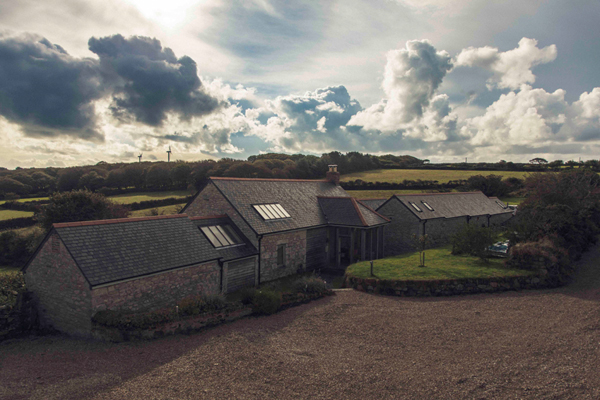 Three stone ruins standing strong on a hillside located on the northern edge of Penryn, Cornwall, was all the inspiration that Dan Thompson required for the design and build of a sympathetic barn conversion.

"My parents discovered some ruined stone buildings in a patch of wooded scrub in a corner of a field they had bought near Mylor in Cornwall,” explained Dan. “When I first saw them, there was a tree growing in what is now the kitchen.”

After clearing the undergrowth, Dan could see there was a range of three buildings of different ages and uses nestled beneath. Some research at the Cornwall History Centre in Redruth revealed there had been buildings on this site since at least 1841. “It was hard to imagine that the buildings had ever been inhabited,” Dan explains, “but, there was a large stone hearth and domestic doors and windows on one of the barns. Whoever decided to build here all those years ago found a magical place on the edge of the granite moor and I set my heart on living here. The hill is called Gonorman, which means ‘nine-stone hill’, and I am sure this place has been special to people for generations.”

Wishing to respect the spirit of the environment and ensure the building sat peacefully on the hillside, the three buildings are arranged linearly, so all the new elements had to be used to join the buildings together. The challenge was to connect the buildings in a way that meant you could still see what was original and what was new, but also to be respectful to the surroundings. The architects achieved this using oak frame, oak boarding and glazing on the new additions, which have weathered to a silver-grey, and simply restoring the stone walls of the original buildings.

It took three years for Dan to gain planning permission, from the day he walked into the planning consultant’s office to the day he heard back from the planning inspector. “Laurence Associates gave me some straightforward advice based on the local plan and, after working out how much new build was required, we were happy that there was enough original building remaining to gain planning permission. It was frustrating that the council refused permission twice, but the reasons for refusal gave us very clear grounds to take the case to appeal, which we were eventually allowed with costs.

“One of the advantages of the three years in planning was it gave me plenty of time to fine-tune the layout. I think getting to know the site and being able to live with the designs for so long helped create a better building.”

“I think barn conversions are pretty challenging generally. We didn’t choose the dimensions of the buildings so had to be quite careful with the space we did have. It is probably responding to the challenges of the site that provided the opportunities for creativity and gave the house its own special character. There seemed to be almost no right angles in the original building, which made things a bit more complicated.”

Dan appointed a main contractor who he worked alongside and he laboured on site. He employed the plumbers and electricians and various other sub-contractors directly. “Most of the trades worked on an hourly basis because of the complex nature of the work,” explains Dan. “There is normally a winner and loser when work is done on a price and, as I was on site every day, I was comfortable that I was getting a fair day’s work for a fair day’s pay. The whole build came in at £1500/m2, which is not bad considering the quality of the work and the less-than-straightforward build.

“We utilised Laurence Associates’ in-house architects, who work with their planners to achieve a design which respects the context of the buildings. Over the three years it took to get planning permission, the architects continued to adapt the internal arrangement of rooms as our ideas evolved.”

Dan wanted to keep a simple palette of materials. The flooring is oak in the social rooms and slate in the bathrooms. The kitchen was built from solid pine by Pineland Furniture and hand-painted on site. The fully-installed kitchen with appliances, sourced online, and granite worktops came in at about £10k. “In general, when specifying materials and appliances, I tried to be objective about the quality that was required and then shop around for the best price,” enlightens Dan.

“Having worked for English Heritage, I was keen on using traditional materials and finishes. I had developed a mild obsession with slate roofs. Traditional slate roofs in west Cornwall are laid in diminishing courses with the shortest at the top; they are also often random widths. This gives them a much more organic look compared with the rigid geometry of a modern slate roof. However, being mostly single storey, the roof was a major element of the build and it would have been too expensive to go down this route. We used a natural slate with the same colouring as the local slate so it blends into the landscape well enough.

“I was also keen to specify environmentally-friendly products where I could, but this didn’t always lead to the solution you might expect. We needed to keep the stone showing on the external walls so all the insulation had to be added internally. I was also aware of the need to let the walls breathe so that any moisture which got into the wall could also escape. I found a lime render that was insulated with hemp which you might imagine would be the perfect solution. However, we couldn’t achieve the right thermal values using this product and had to fall back on rigid board insulation, which is made of a plastic foam. It seems that it’s the best product for reducing energy consumption, which is the priority of Building Control, but unfortunately, it will probably end up in landfill at the end of its useful life.

“We have a ground source heat pump, which is brilliant. It was cheaper to pile vertical collectors, although we would have had space for horizontal, as we are on granite. Not being able to instantly turn up the heating does take a bit of getting used to, but we have a couple of wood-burning stoves to give us instant heat if we need it.”

The build took just over a year, which Dan feels was just about right, as he explains: “After moving in, we applied for permission for a garage, office and home studio, which is now complete. It was much easier to get permission for the garage once the residential use was established. With a bit of advice again from Laurence Associates, I did the drawings and put the planning application in myself through the Planning Portal.

“This was never a high-status building,” confirms Dan. “It was built from stone from a tiny quarry in a neighbouring field. One of the buildings was meant for animals and was originally built into the hillside as they weren’t concerned about damp. We cleared the earth from behind this building rather than tanking as a more reliable solution. It does mean that the building sits down low in the landscape. It’s positioned on the northeast side of the hill, which protects it from the prevailing winds which make the hedgerow trees in this part of Cornwall seem to grow horizontally.

“This is a rural area and, looking at the 1841 census, you can see that there are actually fewer people living in the countryside now than there were then. I suppose this must have been because of the decline in agricultural employment. My father spent his summer holidays as a child working on the neighbouring farm and now lives just down the road. The main contractor also lives close by. I hope the local community is pleased to see the place given a new lease of life.

“There are so many things I love about my new home, but there is something particularly special about how the building sits in the landscape and catches the light in the morning.

“It’s a peaceful rural location and we are surrounded by gorse-filled hedges and blackthorn. A lot of trees had self-seeded when the property had been left to ruin and we’ve kept as many as we can, which hopefully maintains the wild character of the place. We have kept domestic planting to a minimum with only a couple of beds around the slate patio and the front entrance. There is a little triangular garden almost totally concealed by hedges of local plum trees, which we let grow in the summer with the wild campion, primroses and buttercups. In total there are probably about three acres, so a lot of the work throughout the summer is just keeping it all at bay!

“I used Douglas fir for the exposed trusses as I thought it was just as authentic and was a bit cheaper, but I probably should have used oak. I am not that keen on having two different types of wood on show and may end up painting them. Even though the oak flooring had a natural oil finish it does seem to have gone a bit orange over time. If there’s ever a ‘next time’, I will shop around for a different finish.

“The conversion is probably the best thing I’ve ever done and would love to do it again, but have no reason to ever leave!”.

When asked if he had any advice for other budding self-builders, Dan responded: “Live with the design as long as possible and try to walk around every room in your imagination. Really try to imagine what it would be like living in a place, even down to where you will put the hoover. It will make things easier in the long run.”

More in this category: « Self-builder Ian Sweetland talks to i-build about his far from straightforward project Dorset couple Charles and Pennie give us the grand tour of their cantilever, one-storey build »
Login to post comments
back to top