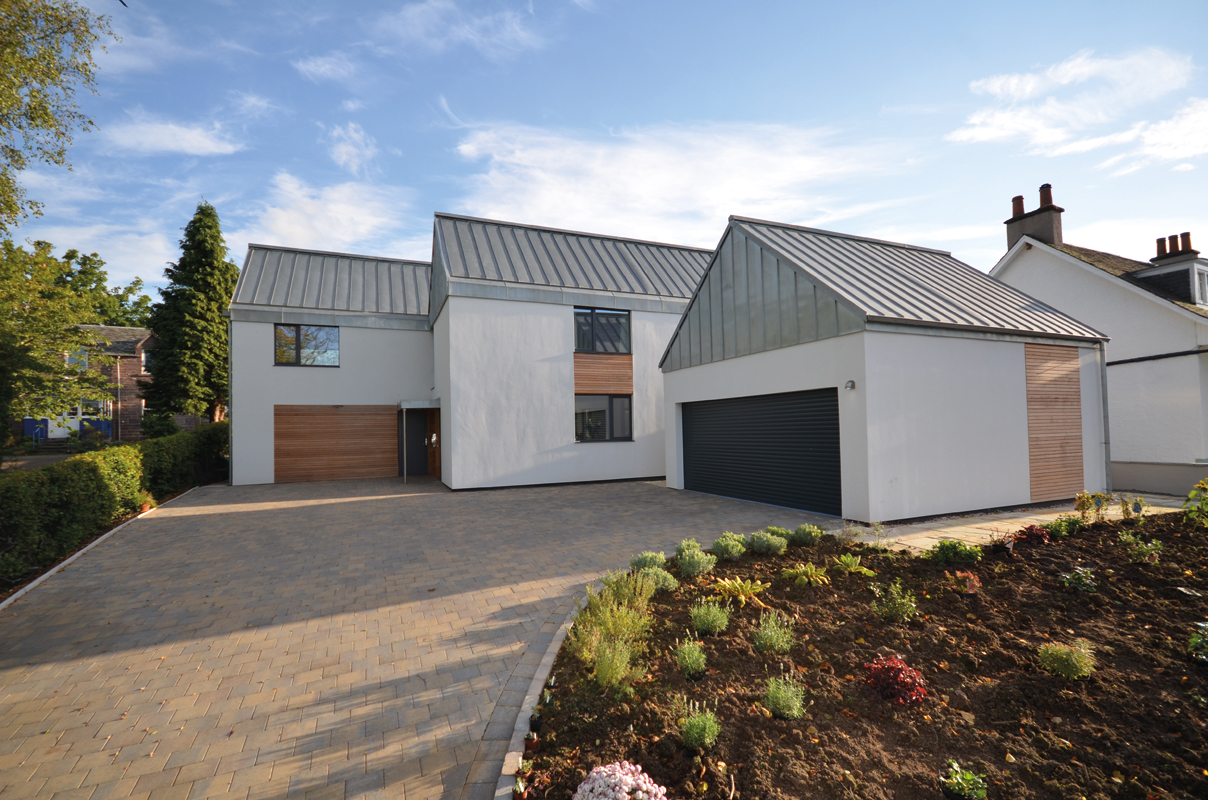 The Maryville Passivhaus is a continuation of research by Joseph Thurrott Architects into the reinterpretation of Scottish rural vernacular buildings to meet modern, low-energy demands. The owners, Ian and Mary Sweetland, have had a far from straightforward process completing their self-build. Here, Ian explains his difficulties and offers his advice to other self-builders.

Maryville is articulated as two volumes to accommodate a larger footprint whilst maintaining the proportion of familiar 6m-wide gable-ended buildings found throughout the Scottish countryside.

A double-height, open-plan living room with a high efficiency wood-burning stove at the centre serves as the focus of the house. The majority of the south elevation is composed of windows, permitting an abundance of direct sunlight into the heart of the home. This passive solar energy provides 60% of the annual space heating.

With an average U-value of 0.10W/m²K, the factory insulated Scotframe Val-U-Therm timber frame superstructure is supported on in-situ concrete strip foundations. An insulated concrete ground-bearing slab provides thermal mass. The superstructure is wrapped in a continuous thermal skin of closed-cell insulation boards, faced predominately with a proprietary render system with timber cladding to the south elevation.

The roof is clad in standing seam zinc sheets with photovoltaic and solar thermal panels to the southern slope. All windows and doors are timber framed and triple glazed with argon/krypton gas fill. The Val-U-Therm envelope is meticulously detailed to mitigate thermal bridging (0.01W/mK), and achieves an average airtightness performance rating of 0.486 air changes per hour at 50 Pa.

Maryville is designed to the Passivhaus standard; hence the total annual energy demand must be less than 120kWh/(m²a). To achieve this target, the spatial planning maximises passive solar heat gain.

In addition, the Scotframe Val-U-Therm external envelope is highly-insulated, airtight and thermal bridge-free. The internal environment is controlled by a mechanical ventilation heat recovery system which distributes fresh, prewarmed air throughout the house 24-hours a day. The combination of the above provides sufficient space heating to maintain a comfortable indoor environment for approximately eight months of the year without the need for an additional heat source. During the winter months, space heating is provided by a wood-burning stove – and with respect to space heating, the Maryville Passive House is a ‘zero carbon’ home.

Ian and Mary had a site, and had considered redevelopment but eventually decided to demolish and build new. They both had previous knowledge of Passivhaus standards and building from time the two had spent in Germany, which partly motivated the new-build. In comparison to the old house, which was extremely costly for energy – in part due to lack of mains gas, ineffective insulation and poor construction – the new-build was a chance for Ian and Mary to realise their Passivhaus dream.

Commenting on his and Mary’s inspiration for Maryville, Ian said: “The vision and inspiration behind our new home was for it to be light, airy and spacious, with low running costs – and designed personally by myself and Mary.

“We finalised our design brief by visiting Highland Expo 2010 after many years of watching Grand Designs and consulting a number of possible architects. We liked plot 19 – both externally and internally – and so contacted the architect, who made some very useful suggestions to modify the design to meet our needs.

“We had purchased the 1950s bungalow on plot in 2000 – knowing it need upgrading and or extending. The new design was flipped through 180° to suit the plot and moved backwards to accommodate the building line – luckily with enough width.”

A change of plan

It took Ian and Mary six months to gain planning permission for Maryville and, when permission was gained, it was discovered that the site required a 1.5-storey design for matching surrounding property heights. This has been achieved – however, without eaves restricting the internal space. Working with Joseph Thurrott Architects, Ian and Mary altered the internal layout, reducing the bedrooms by one and adding additional elements such as a utility room with rear access, a walk-in wardrobe and a Jack and Jill bathroom. Centrally located is the wood-burning stove which, used mainly for effect, was important so as to not dominate the large expanse of end wall.

“Finding a contractor who understood the requirements without overpricing was challenging,” explains Ian. “The contractors’ limited site supervision required us to take a more active role than expected. And then, unfortunately, the contractor went into liquidation – which cost me significantly more money – leaving us to complete.

“Communication was poor during this time too and didn’t help with me being abroad for periods of time – which is something I would improve if I were to undertake another self-build in the future.

“Our experience was better with trained Polish workers on site, who noticed a number of issues first and whose ability and standard of workmanship was generally pleasingly high. This contrasts with local, often sloppy, workers and sub-contractors from the original contractor who were, generally, lacking motivation.”

Taking matters into your own hands

After the contractor went into liquidation, Ian project managed the build himself at stage two. The Sweetlands’ architect was on call throughout for questions and checks, however, the firm had the majority of work to complete prior to construction – in consultation with suppliers, resultant detail tweaks, as well as tight deadlines in the holiday season for the likes of Scotframe.

“The architect produced detailed specifications with the benefit of plot 19’s experience and we added finishing details to our personal choice, such as PV and solar thermal specification,” explains Ian. “The heat pump that was initially specified was erased from plans for that moment in time, but may now be installed in a different form and purely for water heating due to the efficiency ratio only.

“Passivhaus testing met the criteria, but we found the certification costs weren’t worthwhile – and particularly after five years of our experience in the house. Our original time frame was seven months – but took 10 due to the builder going bust!

“Our anticipated full project costs of £325k actually worked out at £375k, with additional costs due to the builder going into liquidation and having to rework some of the things he and the kit manufacturer got wrong through copying too closely plot 19’s design.

“We have the most expensive gutters on the planet with NASA-specified insulation in order to cater for Scotframe failing to provide sufficient clearance in the design. We were fortunate that the Polish joiners working on site were smarter than the contractor to discover this and other issues.”

Being in Loch Lomond and The Trossachs National Park, the planners were keen to encourage Ian and Mary to consider modern designs and a contemporary build. “The materials used were all already permissible – including the zinc roofing,” comments Ian.

“Some local residents weren’t so keen and objected, for example, that it “did not have dormers”. However, now that it’s up they like it and appreciate that we don’t have heating bills for one. We have even held open days for Green Homes Network Scotland.

“The property is everything we hoped for; electric running costs have been in range of £300 to £480 a year, depending on whether we are both home or not. These are offset more or less by the feed in tariff from the solar PV.

“The exterior was a sloping site and we needed to keep the ridge height to match neighbouring houses. We used light-coloured Indian sandstone for light reflection behind a gabion retaining wall to tie in with the established garden at the rear – and utilised block pavers on the drive for access. With regards to plants, we reworked one bed with bulbs and herbaceous perennials and employed a hard landscaper to assist with our external needs.

“The garden is still a working progress. The vegetable garden has been kept the same with improved access paths – newly-established beds between the house and garden at rear, and at the front of the garage.

“My favourite thing about my new home is the airiness – including the filtered air incoming and outgoing – as well as the light and warmth,” remarks Ian.

When asked if he and Mary would do it all again, Ian replied: “Yes; given the right conditions and if we were not enjoying the house as much. But it’s too late in life for some. If we were to do it again, however, we would choose not to live in a caravan on site in winter!”

Ian’s advice for anyone about to take on a self-build is: “Do it ! I would, however, advise to set up a joint account with a builder, and pay suppliers direct from that account, and enforce a strict retention policy.”

More in this category: « Parents inspire couple to self-build rather than buy Three stone ruins transformed into a sympathetic conversion »
Login to post comments
back to top