A striking project designed with accessibility in mind 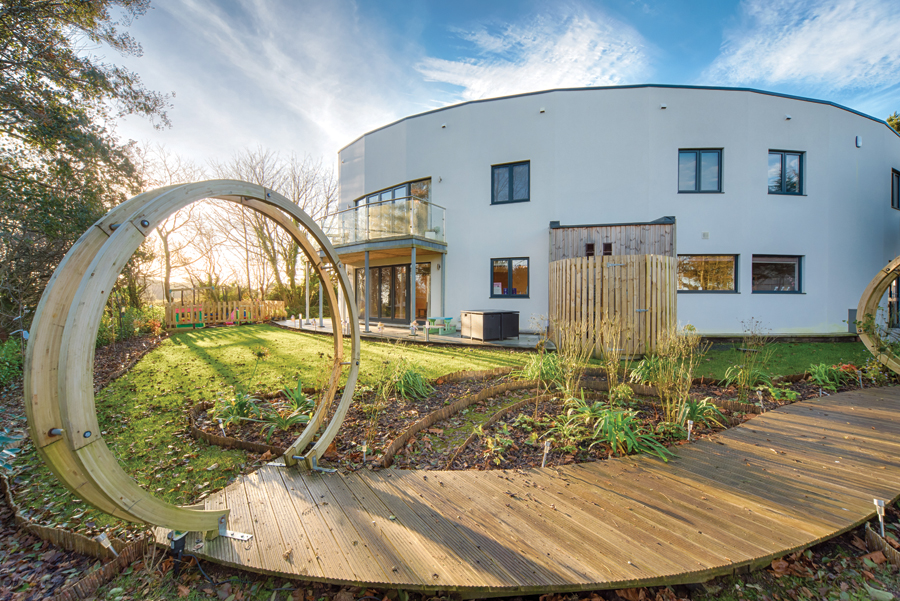 Roy Austin designed and built a modern, contemporary, family eco-home to meet the needs of his young disabled son after the family relocated to Cornwall five years ago. After failing to find anything on the market suitable, Roy decided on a self-build.

Construction got under way in October 2014 and was completed just eight months later. Built on a 90 degree curve, Rosedene is fully accessible with lifts and wide doorways, and is a happy family home.

Having worked in architecture for 14 years as an Architectural Technologist with SPS Architectural Services, Roy had always had a keen interest in design, especially bespoke properties. He commented: “Building our own home is something my wife and I discussed fairly early on, before we even had children. When we were renting a property, it transpired that our landlord had a plot of land for sale next door with planning permission.

“I felt, considering the cost of buying a house to adapt or extend to cater for my son who has cerebral palsy, it would be more cost effective to build something from scratch and to incorporate everything we needed from day one.”

While the family had complete design freedom, there were several elements that were necessary in order for Roy and Gemma’s son to move freely around the house. Roy continued: “It was important that accessibility was considered throughout the house, along with the provision of specialist bathroom facilities. The majority of the design was not only based around his needs now, but also his future needs. He’s growing to become more independent and therefore we wanted a house that would accommodate that.”

In terms of the architecture itself, as part of the original design, the family wanted a build with a slight curvature in order to maximise the amount of daylight coming into the property. It was originally due to be a sheer curve but, with the help of specialists, the curve was engineered slightly to make it a bit more user-friendly to build.

SPS Architectural Services’ sister company, Frame Homes of Redruth, is a timber frame manufacturer, so naturally the couple opted for a timber framed home. Not only did this ease the family’s mind by working with a reputable supplier, but it was a more attractive option thanks to the speed of construction.

Roy commented: “Construction got underway in October 2014 and we finished in the following June. However, we did have a few delays. We were originally due to be in for April time, but we experienced slight setbacks due to the weather.”

He continued: “The majority of the build went relatively well. There was a little bit of a delay over the Christmas period where construction shut down and we waited quite a while for the windows to be delivered as they were quite late getting to site, but apart from that it went pretty well.”

As for the layout, Roy explained: “On the ground floor, you’ll find the main entrance where there’s a staircase up to the first floor. There’s access to a ground floor cloakroom and a hall which leads out onto an open-plan lounge, dining room and kitchen. From there we’ve got a small room off to the front of the house which is used as a playroom. Off the kitchen, there’s a room which we use for our son’s therapy. At the side of the property, there’s an extra entrance area which goes out onto a corridor and that acts as a link to the garage and the main part of the property. Upstairs we have four bedrooms, two of which have got en-suite bathrooms. One has got a Jack and Jill bathroom.”

To accommodate the couple’s son, the doors are wide for future wheelchair use, and there is a wheelchair lift which goes from the therapy room up to his bedroom. There is also an accessible toilet on both floors.

Thanks to the relatively smooth nature of the build, the couple’s original budget was met. Roy commented: “There were a few changes throughout the build, which meant we had to make some design decisions and make savings elsewhere. Despite those minor tweaks I don’t think we would have done anything differently. We had a few issues with the mechanical ventilation system, which took a bit of time to resolve after the build, but the majority of the build went according to plan.

“Renewable energy was high on our list of priorities, so along with mechanical ventilation, we have an air source heat pump that supplies all of our heating and hot water for the house, underfloor heating which heats the floors, there’s rainwater harvesting which serves the toilets, washing machine and outside tap and then we’ve got a wastewater recovery system. A 7500l tank is situated underground in the garden.

“After 18 months in the property, we have found these systems have reduced our bills significantly. The systems are cheap to run, plus our water bills have reduced considerably on a water metre, and I would say the total cost for a whole year was about £250.”

When asked if he’d do it all again, Roy remarked: “Yes, I probably would. I enjoyed doing it and it was a nice change to do it for ourselves rather than other clients which we do on a regular basis. It’s a very rewarding experience and it’s great to see the whole process from start to finish. My advice would to be to get everything priced up so you have a clear idea of the total costs and that way you know if you’re being realistic with the budget. Just do a lot of pre-planning.”

The property has received fantastic reviews from everyone who’s seen the property. Roy added: “My son is able to access the whole house so he’s not restricted in any way and that was the main criteria when we designed the house – to make sure he wasn’t isolated in any way within the property.”

What’s more, as part of a campaign that shines a spotlight on self-builders, Roy was recently crowned as a winner for his home. Specialist in structural defects insurance, CRL launched the campaign Venturous Builds to showcase Britain’s inspiring self-builders and their construction achievements. Roy was one of three winners and the property was selected for being a truly venturous build.

Roy commented: “We’re delighted to have been chosen as one of the winners of the campaign and that our achievements have been recognised.” CRL CEO, Steve Mansour, added: “We’ve been blown away by the quality of all the entries we’ve received for our Venturous Builds campaign. You’ve proved that the UK has some truly venturous self-builders and developers.

“We were looking for one-offs, the inspiring, the ingenious construction projects to feature in our Venturous Builds web series. Roy clearly demonstrates that he has the courage, determination and an unwavering belief in his ability to create something truly unique.”

More in this category: « Self-builder combines old and new to create smart home Prefabricated build ticks all the boxes »
Login to post comments
back to top