Prefabricated build ticks all the boxes 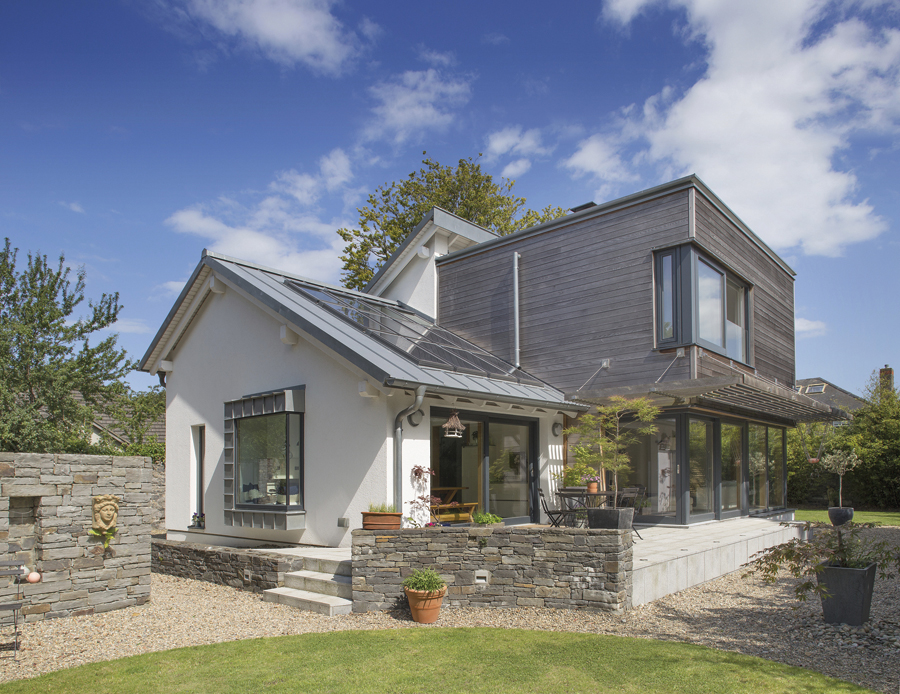 Living in Dublin, John and Jodie McAllister wanted to create their dream home in the city they loved, making their idea of urban living in their own uniquely-designed home a reality. Choosing WeberHaus enabled them to make this dream come true.

John and Jodie McAllister lived in a beautiful Victorian house with lots of charm, but also with many of the drawbacks typical of this style, including poor insulation and a cold and draughty living environment. When they began to consider moving on they decided to realise their dream of building their own home rather than buying an existing house. As an architect and an interior designer, they knew exactly how to bring their vision to life. John explains: “As designers, we were keen to see how we could improve our own living environment and be able to advise our clients better from our own experiences.”

The McAllisters had the chance to acquire land from large adjoining gardens where they lived in Dublin and, once they had secured the site, they began to investigate their options. Rather than pursuing a traditional build, the idea of a prefabricated build was the most appealing. “We wanted to be sure that our new home would work in terms of performance,” John comments. “Factory-built houses are more controlled and less susceptible to weather conditions, so you can more or less guarantee your finish and insulation.”

The couple researched several providers and settled on German, luxury prefabricated homes supplier, WeberHaus. John continues:“The deciding factor for us was the flexibility and quality that WeberHaus could offer. It wasn’t an entry-level option, but we wanted to design 95% of our home ourselves and WeberHaus was able to achieve everything we wanted.”

John’s own architectural expertise meant that he could go to WeberHaus with his plans and work alongside the company’s designers to finesse them. The couple visited the WeberHaus HQ in Germany twice to see the factory in action and experience the company’s “World of Living” show park. This vast complex allows customers to see what WeberHaus can offer and to choose the final fixtures and fittings of their new homes. John went on: “It was a fantastic experience to see the huge array of materials and finishes available and to be able to go through all of the details with the WeberHaus team.”

Although WeberHaus offers a fully project-managed solution including full internal fit-out, the McAllisters decided to go for the shell solution so that Jodie could use her interior design skills. Once planning permission was in place and the couple began working with WeberHaus, the entire process – from initial conversations to the completion of the build – took only seven months. Once the 12 lorries carrying their new home arrived on site, it took only a few days for the house to be constructed – wind and weather-proof. John says: “After months of preparation, it was very exciting to see it all erected so rapidly and efficiently by a team that clearly knew exactly what they were doing. Compared to a traditional construction where the walls, roof, floors and so on can take four or five months, it was extraordinarily fast! Once the shell was up the crew remained on site for around five weeks to finish the rendering and cladding, which minimised disruption for the neighbours.”

The McAllisters knew what they wanted from their new home not just as designers, but also as homeowners. “We wanted something dramatic, lots of room height and a conceptual design from the inside out. A contemporary building using natural materials,” John explains. “As an architect and interior designer involved in residential work, we feel a responsibility to reduce our carbon footprint as much as possible, so we chose a design and materials to reflect that.”

As a result, their new home features three different roof forms sheltering nearly 280m² of living space; a combination that was deliberately chosen by John to achieve contrasts that match those between the plaster facade and weather boarding. Nestled among the surrounding gardens, the many floor-to-ceiling windows offer a view of natural greenery in the city centre.

“In a sense, the garden comes into the living room and the living room goes out into the garden,” John comments. This effect is also maximised in the master bedroom, with a glass balustrade outside the floor-to-ceiling window to maintain the view and open up the room. Jodie notes: “We’re in the middle of the city, so it’s lovely to feel that you’re not hemmed in.”

Daylight floods the living and dining area from two sides, as well as through the skylight, thereby creating a different lighting effect depending on the time of day. Even in the basement, a great deal of light penetrates the inserted glass element directly by the staircase that leads to the lower floor. The basement flat has a separate entrance and forms a self-contained unit with three rooms, plus kitchen and bathroom. Planning restrictions meant that the house could only be two storeys high, so the basement provided an ideal solution.Sustainability

John and Jodie took care to incorporate numerous ecological features into their home. “We can take a bath with a clear conscience,” says Jodie, “because the house has a rainwater harvesting system as well as heating via the solar system.” The house is built from natural, highly-insulating, sustainable wood, ‘green’ cement and mineral wool fibre insulation comprising up to 85% recycled glass. Energy-efficiency is managed by super-insulation, airtightness and a heat recovery ventilation system, as well as deliberately large south-facing windows coupled with smaller north-facing windows. John notes: “Without being too scientific about it, we have halved our energy bills since moving into our new home.”

The McAllisters now enjoy a superior living environment in their WeberHaus home. John remarks: “The best part of the whole experience, apart from the quality of the build, is the living experience. The way all the light and spaces flow together and the fact that it is so well insulated and airtight means that we enjoy a constant temperature throughout and aren’t always pulling jumpers on and off!” The kitchen is the heart of the McAllisters’ home and the layout means that it’s easy to access from anywhere in the house. The children have also enjoyed the experience and love the new house as much as their parents. “The children thought the unusual nature of the build was great and, in particular, love the laundry chute!”

Overall, the McAllisters are thrilled with their new home and were delighted by the whole experience. John concludes: “WeberHaus is very thorough and ensured that every aspect of the design and build process was managed. They were professional, quick to respond, and any subsequent minor details were addressed swiftly with no problems. We enjoyed everything from start to finish and now we have the home we dreamed of.”

More in this category: « A striking project designed with accessibility in mind New-build property benefits from made-to-order wooden windows and doors »
Login to post comments
back to top