Self-build home meets the needs of an East Sussex family 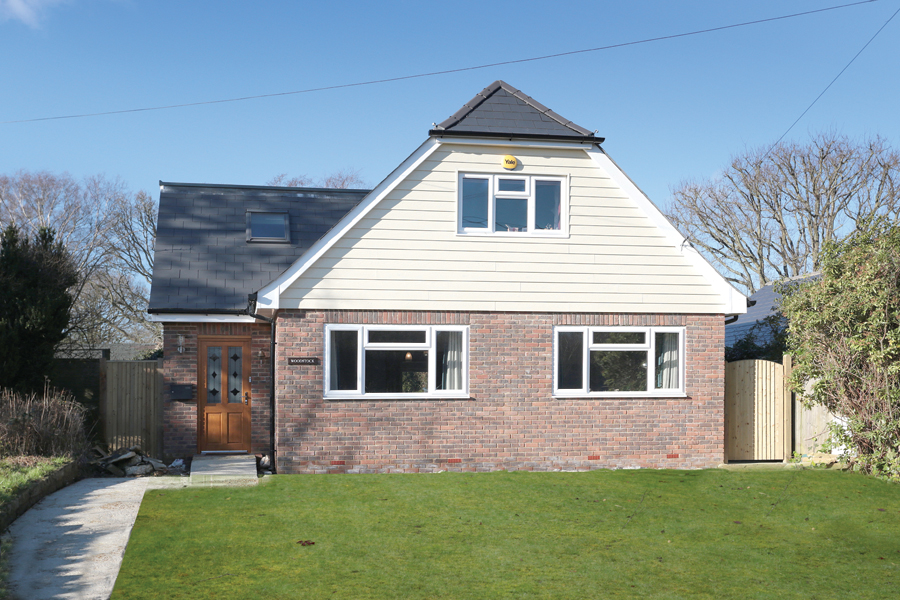 John Churchett wanted some additional living space for his growing daughter. Having completely paid off the mortgage on his two-bedroomed single-storey home in East Sussex, John did not anticipate there being any problem with raising finance when he decided to extend his house.

After making the first few enquiries, disaster struck. Three separate mortgage companies turned down his request for finance on the basis that the 1930s timber frame structure of the house could not be guaranteed to last for long enough to secure the loan.

“That was the worst possible news,” reflects John. “We discovered that our house was effectively worthless. We couldn’t do the extension we needed and were also in the position that no-one would be able to raise finance to buy the house, so it would have been difficult to move either.”

John had never really considered building a home for himself, but it rapidly became obvious that this was the best option. Three years later the finished house is a delight, giving all the family what they wanted, although the journey was not always plain sailing, as John explains:“The best thing about starting from scratch is that we could think about how we wanted the whole house to work – not just bolt on additional space to the original design.

“I now have an office at home, my wife has the kitchen she has always secretly wanted and the rooms we have built into the roof space give my daughter all the space she needs.”

John adds: “We could also design-in some extras that we probably wouldn’t have considered otherwise. For example, the whole house is wired with a high specification communications network throughout.”

Like most self-builds, sometimes things don’t go according to plan, and for John and his family managing the money was the most difficult bit.

He explains: “We got a self-build mortgage from the self-build specialist, BuildStore. In order to work out how much we needed to borrow, we had to cost everything in at the start. And those costs had to be right as negotiating for a higher loan later in the process would have been very difficult.

“Our self-build mortgage released the money in stages. You start off with a large initial payment – generally equivalent to what the land is worth – and get the rest as each stage is finished and signed off by the building inspector.

“Cash flow is a challenge. You need to really keep on top of everything. The tranches of money come in from the mortgage company as each stage of the build is completed, so you need to do a bit of juggling between paying the builder for the work he has done and waiting for the latest inspection on the house to receive the next instalment of mortgage money.”

The decision to level his existing house and rebuild was not an easy one for John and his family to make. The easy decision was which material to use to rebuild, with aircrete at the top of John’s wish list. Aircrete, combined with the H+H Thin-Joint System, meant that John was assured of a very fast build process, with a weathertight masonry shell able to be erected within a manner of days.

Making the decision to use aircrete even easier was the assistance provided by material manufacturer H+H and its Recommended Contractor Scheme. The H+H Recommended Contractors Scheme utilises specialised thin-joint blockwork contractors to carry out the masonry build process. Once a project using H+H aircrete and the Thin-Joint System becomes available, H+H can put forward one of its local contractors.

In the case of John and his project, H+H Recommended Contractor Masonry Frames Systems was up to the task. Company Director, Norman Hinkes, is a long-time user of the Thin-Joint System by H+H, understanding that it’s an effective way to create a thermally efficient structure with low U-values. The Thin-Joint System goes one step further, creating homes with very low air leakage values ensuring homes are not only operationally efficient, but comfortable for the end user.

John’s house was constructed using H+H’s larger format, 100mm 3.6N/mm² Jumbo Bloks, ideally suited to H+H’s Thin-Joint System. Aircrete was an integral element of the original specification from John who was definite on his preference for the robust solidity of a masonry construction. The bad experience encountered with the original timber frame structure also meant that the priority was to build a home whose durability and long-term value was assured.

The objective was to build an energy-efficient home with year-round comfort combined with minimal running costs. The building was therefore designed following Passivhaus principles requiring exceptional thermal performance from the building fabric combined with very high airtightness performance. Aircrete, with its inherent thermal insulation, provides an ideal material for a fabric-first approach to energy-efficient design while the Thin-Joint System of construction, with its minimal 2mm joints, provides optimal airtightness.

The choice of H+H aircrete was determined by John’s confidence in both the thin-joint contractor and the level of technical advice and support available from H+H. As John was project managing the build himself, while simultaneously holding a full-time job, it was imperative that he had complete trust in both the build method and the contractor.

To reach the level of performance that John required there was one slight compromise and that was the budget. John comments: “We ended up around 10% over budget with the overspends largely caused by issues we really couldn’t have anticipated.

“At the end of the day we were able to completely rebuild our home from scratch for £70k more than the estimate for the original plans for an extension. We have all the benefits of a high-quality modern building and materials, and I think the economics of the project really make sense: in fact, we really should have considered this option at the outset.”

When asked if he would do it all over again, John remarks: “I very much hope that I won’t have to! But yes, I would. It was certainly challenging, but the end of the process was really worth it.”

1. If you need more (or different) space, but like where you live, do consider building a new house. There is no VAT on new build projects and once you have factored in all the costs associated with moving, you might find it’s not that much more costly.

3. Pay attention to the structure. You don’t see them, but the structural walls are some of the most important parts of the building. The blockwork probably costs only the same as the doors and windows, so it’s worth using a decent system with a proven track record.

4. Use a builder you trust. They may not be the cheapest, but unless you are on site every day you really need to be sure they are going to do a great quality job.

5. Use experts. You’ll most likely be working with an architect, but also use the technical expertise of companies like H+H that provide technical advice, design details and even technical drawings that can reduce the time and cost involved in the planning stages.

6. Plan for the future. At the end of the process you want the security of knowing that your house will be a great asset for the long term, so when it comes to the structure of the house, don’t go for anything that won’t last at least two lifetimes.

7. Be very sure you know who’s responsible for what. In our case, I worked on the structure of the house and my wife took over when it came to the interior design and fittings. Planning that division of work at the start removed a lot of the potential for arguments.

8. Allow plenty of time to sort out the utilities.

9. Consult your neighbours at an early stage. If you involve them in the planning stages they are far more likely to support your planning application.

10. Design in some treats. My Bluetooth bathroom mirror makes me smile every morning.

More in this category: « Perfect plot meets the needs of the whole family Architect builds his own sustainable home »
Login to post comments
back to top