Self-builder carves his vision with attention to detail 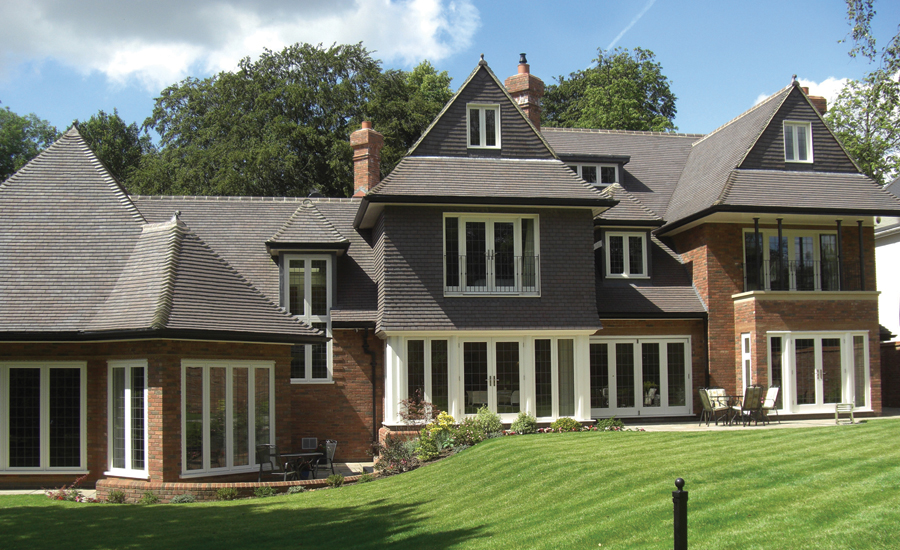 For many self-builders, their ambition to self-build is driven by the desire to have full control over their dream home and the choices that come with it. For Brian Murray, his vision for a traditional Arts and Crafts home inspired his journey from start to finish.

When Brian set about building his dream home, he knew from the start that it would reflect his love of the Arts and Crafts period. “I’ve always found that when buying a property, you are so limited. By building my own home, I was able to control the quality of the materials, the specification and the small detailing, which often makes the most difference.”

Brian’s vision and inspiration was influenced by the architectural history of the area and the site’s location together with his love of the Arts and Crafts period, which includes simple design lines and the use of good quality materials and detailing. “I realised early in the design stages that this was going to be a complicated task,” comments Brian. “And that to achieve a quality end product I would need to employ an architectural designer to assist me. I employed the services of Nigel Collingswood at Qube Design and his design decisions proved to be key to the success of the build.”

From the outset, Brian required a property that provided enough space for his family and entertaining guests. He explains: “The property needed to contain a minimum of five bedrooms, a separate drawing room and a great entertainment space, including an indoor swimming pool and a cinema room.”

With such a clear vision in mind, it was no easy task to find the right plot. Brian had spent many months searching for an appropriate greenfield site that didn’t have restrictions – a rare find in his desired location, but eventually he struck gold, as he explains: “I was very lucky to come across a site which originally was part of the adjoining property’s garden, containing tennis courts and an orchard. The site had an ideal setting, being open to the rear and looking over Moor Hall Golf Course with its frontage facing onto a mature copse/garden area. It also had a wide frontage and was set within a private road.”

The architect Nigel Collingswood had undertaken similar projects in the area and therefore had a good rapport with the local authority planning department. Nigel talks through the process: “A pre-application was made in the first instance. Design and policy issues were discussed with the planners and adjoining property owners and the final design encapsulated officer recommendations and took on objectors’ concerns. The pre-application approach then enabled a smooth run with the main planning application. In the end, the total time for both processes took four months.”

Despite a smooth sailing planning process, the build was not without its challenges. “We encountered challenges from day one with the site set up,” explains Brian. “The main challenging element was the indoor swimming pool where ground conditions required some considerable structural input and here there were also some waterproofing issues.”

As main project manager, Brian witnessed first-hand the day-to-day negotiations and complex issues which needed to be worked through. Fortunately, he was able to work closely with Nigel of Qube Design and the quantity surveyor. Brian explains: “I also employed a site manager and fortnightly meetings were held to discuss the programme, costings and general progress of the build.

“It was essential that I managed the build as I wanted every aspect of the build to be high quality and reflect my vision of the Arts and Crafts period. To help achieve this, the architect played an important part from start to finish.”

Brian approached material specification by seeking inspiration from similar properties and researching the market via magazines and reference books. A lot of the material choices were also recommended by the designer who was also influenced by previous projects in the area.

As the building is extremely energy efficient, Brian took the decision not to specify any renewable technologies. He explains: “I took the stance that they would affect the visible appearance of the building, but we took great endeavours to make the build as thoroughly efficient as possible, and we also incorporated a whole house ventilation system to minimise heat loss.”

The original project programme was estimated to take 15 months, however due to some restrictions on site, bad weather and some contractual issues, Brian reveals the build process was extended to 26 months, longer than expected, but worth the end result. Just as the programme overran, so did the budget as Brian explains further: “The original budget exceeded as always on a project of this nature and size, which was due to design and material changes and unknown site issues, together with the extended contract period. But I’m happy with the end result and very pleased with the estimated value price of the property on completion.”

For Brian and his family, their new home has truly realised their vision for an Arts and Crafts home, while capturing a clean, contemporary feel internally, without losing the quality and comfort of traditional features. Meanwhile, the exterior space provides excellent circulation and amenity areas for both function and leisure. The external environment has a seamless relationship with the property itself, which was really important to Brian: “It was important that the building should sit well within the site’s location and immediate setting, and when completed provide the feeling of belonging to its position with the street scene.”

By going to considerable efforts to ensure that the building sits well within its surroundings, the home has received a wealth of compliments from the local community. Brian adds: “We have had nothing but praise from the local residents and some have commented that it’s the best on the road, which is very satisfying and rewarding.”

Despite a wealth of praise by family and friends, Brian does admit there would be some slight amendments if he had the chance. “As with everything, nothing is perfect and as you would expect, if I had the time again I would change some of the layout, but all in all I’m extremely satisfied with the finished product,” he explains. “My favourite aspects of the building are the materials and detailing, which was achieved by my designer who was able to interpret my Arts and Crafts vision – notably, the entrance door’s stained glass.”

The roof is also a dominant feature of this luxury Arts and Crafts self-build home. Brian had always envisaged having a dark handmade tile, but on researching the market he discovered most of the dark tiles have been sprayed or painted artificially.

“Having such a dominant roof, we were keen that it should not look in any way contrived, and we wanted to use a tile with a genuine clay colour, that would have some variant of colour and texture on its surface,” explains Brian. “We were therefore very pleased to come across Dreadnought Tiles at a self-build exhibition. Dreadnought had just launched their Classic range of handmade tiles and offered a choice of four natural clay colours. Their Staffordshire Blue tile didn’t quite offer the varied shades of purples and lighter blues that we were after, but they agreed to produce a Dark Heather tile especially for us, which they have now incorporated into their Classic range.”

Nigel at Qube Design incorporated a number of different features into the roof, which adds further interest to the build. His design allowed for two storeys within the roof space and uses many dormer windows, differing roof levels and sprocketed eaves. By using sprockets, Nigel has created subtle lines and given elegance to the building and he has accommodated the pitch transitions by adjusting the tilt of the bonnet hips. The sense of quality and attention to detail is emphasised by the use of special shaped hip finials that accommodate the curved shape of the adjacent bonnet hips.

Only small format tiles could achieve the complex roofing features central to the design of this elegant home. This choice of tile was clearly a key decision given the prominence of the roof. Brian was determined not to use an artificially coloured tile. He wanted some variation of colour, texture and shape in the tile that he chose.

Reflecting on his experience, Brian reveals he would certainly take on another self-build but maybe with a few differences. “I’d perhaps look at a different architectural style, maybe more on a smaller scale and a cottage theme, but not too small. Looking back on my experience and the lessons I’ve learned, I would definitely advise prospective self-builders to take their time in deciding what their vision is and collate a firm brief to give to the design team.

“If you’re looking at embarking on your own self-build, employ a good designer, one that you can talk to openly. The more you firm up your design before works commence, the more control you have over the cost of the programme. A good design team, quality tradesmen and materials are essential.”