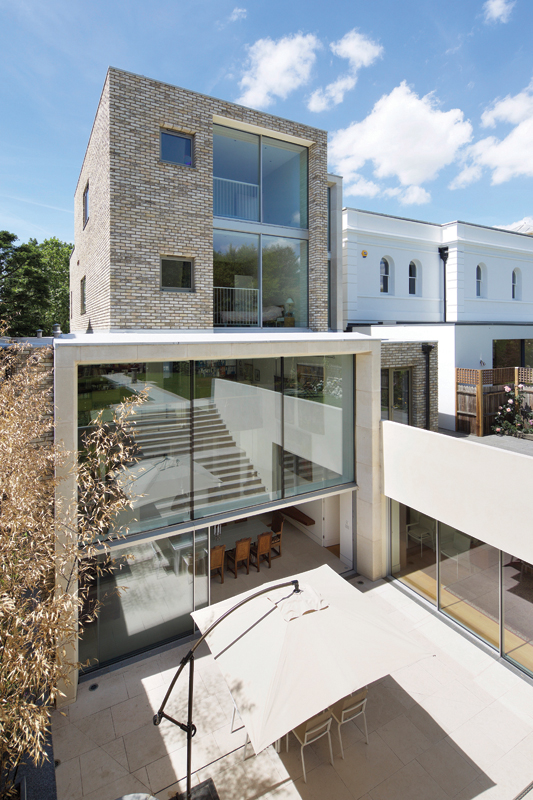 After having spent many years financing large-scale social and private housing, Ken Cox, and his wife Helen, were confident that they could finally take on the challenge of building their own unique home.

Ken explains: “I have had a lifelong interest in architecture and at one point seriously considered it as a career. I have lived in houses ranging in age from 15th to 20th Century. They all had their own personalities. The availability of a unique property in London, which I knew well, inspired me to build something that was tailor made for us. In addition, I had just retired having spent many years financing larger-scale social and private housing projects, which gave me the confidence to take on the challenges.”

The couple had lived in close proximity to this unique plot, and Ken had known the original owner well. The plot was of a good size with a unique outlook. However, the original property was wholly out of keeping with its surroundings, it was somewhat dilapidated and cried out to be demolished. Ken explains: “I was able to talk to the planners and the local conservation society before acquisition and determine that they would look favourably on a complete rebuild.” After nine months, planning permission was eventually granted.

Flexibility of use and quality were paramount to the family. “We wanted to construct a modern, well-built, individual inner London family home that would blend into its Victorian surroundings,” explains Ken. “We wanted it to be a comfortable home for the two of us when we were on our own and at the same time give us plenty of room for big family gatherings or formal dinner parties.”

The house was to take full advantage of its unique situation with uninterrupted views of the private 4-acre arboretum to the rear and Wandsworth Common to the front, both of which can never be built on. Helen adds: “We wanted to take full advantage of that to provide a light-filled interior and maximise views of greenery and the contrasting sky throughout the house.”

The couple approached the design brief by holding a design competition with a shortlist of four architects. Ken explains: “Each was given the same brief and asked to respond. MG Architects, a local firm who won the competition, put forward the fullest response to our brief, answered every question and had put the time in to provide their ideas of an initial plan and layout whilst the others were still at concept stage. We then worked on those plans but there were remarkably few major changes overall between the initial proposals and the final outcome.”

The couple’s key hurdle was to comply with the stringent planning requirements imposed on them by the fact that the property is in a conservation area in a street comprising mostly grand Victorian villas.

There are also detailed covenants affecting the front and rear sightlines of the property which both Ken and Helen wanted to comply with out of neighbourliness.

Ken explains further: “Obtaining local authority and in particular the conservation officer’s consent to the detailed plans was a challenge. We hired planning consultants to guide us through that particular maze. Piling to the perimeter and constructing a large basement area on a relatively narrow site adjacent to (and in part replacing) old boundary walls led to lengthy party wall negotiations. Meeting the planning requirement that we built to a standard of Level 3 of the Code for Sustainable Homes, which was in force at the time of seeking our planning consent, was a costly and protracted exercise.”

Due to the complex nature of the build, Ken decided against taking on the role of project manager as he explains: “Project management was beyond my competence and I had heard too many tales of disasters. In any event, we were living in France while the house was being built so I would not have been able to be on-site sufficiently frequently. We used the services of a large national project management company, Faithful + Gould in addition to the architect. They held formal monthly progress meetings with all parties which I attended. The architect, Michael Cartwright, was at the heart of all our thinking and decision-making throughout the project from the earliest conceptual days through to the final snagging. He has been pivotal to the whole exercise.”

Material specification was an integral part of the process, most of which was taken care of by the architect and consulting engineers. Ken adds: “The architect and consulting engineers specified much of the internal and external fabric of the building. Unusually, we had four direct contractors: main, electrical, mechanical and joinery who also submitted details of proposed materials and specification for approval. Managing the contractors and their interaction was a critical part of the project but we were helped immensely by long-standing personal relationships.

“Given the amount of glass incorporated in the plans and the visual impact of that, particular attention was given to its design and specification. From the beginning, the architect had wanted to use the Swiss “Sky-Frame” system because of its slender frames and good heat retention/sound reduction qualities. This did lead to a number of practical issues in terms of delivery delays and installation scheduling.”

Overall, the project took a little under three years from inception. This was probably 6-9 months longer than the couple had originally thought but an excellent result nevertheless. Remarkably however, the couple’s costs didn’t overrun. “We spent a lot of time at the outset assessing and probing the anticipated costs,” explains Ken. “These included five iterations of a detailed breakdown of all the component parts. No surprises were the watchwords. We obtained fixed price contracts from all parties and these were adhered to vigorously throughout the project.”

The house incorporates living accommodation on the ground floor and basement with two en-suite bedrooms on the first floor and two further bedrooms and a family bathroom on the top floor. On entering the house, the visitor is immediately struck by the light and “see through” views from the entrance hall and stairway. Double doors lead off the hallway to a lounge with a multi-fuel fireplace – the only traditionally styled room in the house. The room houses a surprise however: with a single press of the button the curtains close slowly, the light dims and a projector and screen drop from the ceiling to provide a home cinema.

From the lounge, double doors open to reveal the mezzanine library area incorporating two discreet office areas and stunning double height windows overlooking the garden and patio. This is usually the point at which visitors gasp at the “wow” factor. Wide “industrial” steps lead down to a huge kitchen and dining area with sliding doors opening onto a very private patio area with a grand staircase leading up to the garden.

There is a large playroom or cosy retreat off the dining area which also has sliding full height glass windows so that the whole area can be opened up into an indoor/outdoor circulating space for parties or simply enjoying the great British summer. Further rooms off the hall to the kitchen provide for a bedroom, utility room, shower room and sauna whilst there is ample storage for kitchen overspill adjacent to the plant room.

Upstairs, the floor-to-ceiling glazing in all of the bedrooms means that they benefit from sweeping views of trees, the common, parkland or sky. In particular, there is a strong feeling of living in the trees from the second floor bedrooms.

The sizeable terrace at second floor level overlooking the common is the family’s favourite place to sit and enjoy a cocktail whilst watching the sun set over Wandsworth.

The couple compares the property to a Tardis – to onlookers it appears sympathetic to the streetscape, but as you gradually make your way to the rear of the property you’re in for a surprise. Ken explains: “The front of the property sits quietly and comfortably with its neighbours; the pale bricks called Terca, by Wienerberger, blend in well with adjoining properties. Strollers on the common can see right through the glass staircase to the arboretum at the rear, opening up to an unexpected view that had been hidden for half a century.

“The magic is, perhaps best viewed privately from the rear where the visual impact is more dramatic with huge expanses of glass that reflect the trees and sky from every angle.”

Overall the project has been a huge success, and Ken reveals he would definitely turn his hand to another self-build if the right situation presented itself. “Although, we do love this house and the area we live in, and would not go seeking a new property,” explains Ken. “We might take many of the principles we learnt here in England over to our house in France however.”

More in this category: « Garden plot provides perfect spot for sustainable build Contemporary build is brought back to life »
Login to post comments
back to top