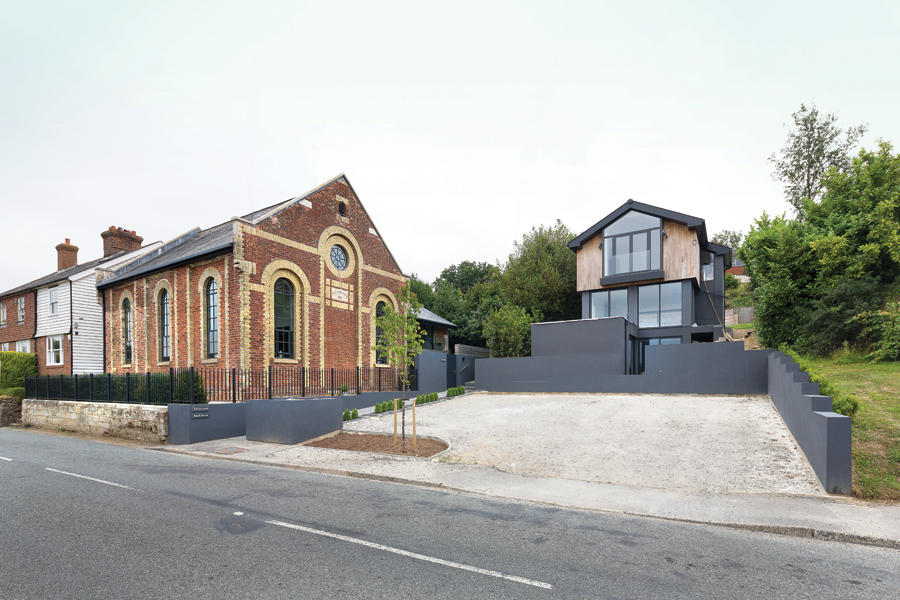 When Nick Leggett and his partner Sonja Johnson bought an old Methodist Chapel to convert, they recognised the potential to build another property beside it.

Nick Leggett – a chartered surveyor and Partner of NDL Consulting – and his business and life partner Sonja Johnson were looking for a home-building challenge when they spotted the potential opportunity of an abandoned chapel in their village of Goudhurst in Kent. The Methodist Chapel, part of which dated back to 1838, had stood unused for eight years and was in a terrible state of disrepair. The chapel also benefitted from an adjacent plot that offered the opportunity for two projects in one.

Nick explains: “We approached the Methodists, who would not sell it to us. They were actually attempting to get a planning consent that utilised both plots, but were unsuccessful. After many planning applications they achieved consent for the conversion of the chapel and a small rear extension, but failed to get planning consent on the adjacent plot. They eventually put the property to auction and we went along and bought it.”

Although the couple aimed to build a contemporary property beside the chapel conversion, the aim was for the buildings to complement each other and act as a pair. Nick and Sonja worked closely alongside an architect and structural engineer to produce designs for both the conversion and the new home. They went through an iterative design process in order to finalise proposals, which also involved consulting with neighbours.

The aim for both properties was to achieve good open plan spaces suitable for modern family living, as Nick explains: “We wanted a challenge and to also have the chance to create a house for modern living with our stamp on it. We like contemporary design that uses traditional materials, but we also wanted to keep the main part of the Methodist Chapel because it has important historical context for the village. We wanted both buildings to appear to belong to the same family, although site constraints meant they would be different designs. We had a basic idea of the look and feel we wanted to create, so we carried out internet and on the ground research to set down the materials and specification we wanted.”

Both planning applications were made simultaneously so that the development of the whole site could be viewed as one coordinated approach. Tunbridge Wells Borough Council approved the plans thanks to the full support of the local Parish Council and a number of neighbours.

There were many challenging aspects to converting the chapel due to its neglected state. The rear portion of the structure, which dated back to 1838, was demolished and rebuilt using reclaimed materials. Although the chapel was not listed, the couple were keen to retain the overall character and volume the building, including the property front which dated back to 1876. The building was completely stripped back so that only the facades remained standing and the new structure was inserted within the space.

Another challenge was to avoid splitting the tall windows when inserting the new first floor. Clever design and thoughtful planning has achieved this on four out of the five main windows – unfortunately one had to be split in order to create the desired amount of upper floor space.

The chapel had a side extension that had been added in the 1960s. Nick and Sonja decided to remove this in order to restore the property to its original appearance. A large, modern extension has been added to the rear of the property.

The main challenge for the new adjacent property was the structural engineering of building on a narrow sloping site. 600 tonnes of earth was removed from the site and the Insulated Concrete Formwork (ICF) system now sits partly below ground.

Each property took about 18 months to build and the new property was deliberately delayed towards to end as a result of finances. Nick and Sonja have been living in the conversion, now called The Old Chapel, while the second property, Chapel View, was built, which will now become their home. Both projects remained close to budget, although extra costs included several specification creeps in terms of technology in The Old Chapel and upgrades in the new houseonce the family decided it was going to become their home.

The Old Chapel is approximately 2800ft² with two reception rooms, four bedrooms and two bathrooms. The living space benefits from views to the north west, features a wood burning stove and illuminated recessed display shelves. The modern kitchen is equipped with Corian worktops and a central island. Bi-folding doors open onto a large courtyard paved in natural stone. The bathrooms include fittings by Duravit and Hansgrohe.

Chapel View is 1900ft² across three floors, with three bedrooms, an open plan lounge/kitchen/diner, a utility room and snug/office. The home boasts impressive eco-credentials, with no heating required and sustainable materials used throughout. An impressive structural steel staircase and polished concrete floors throughout add to the contemporary feel of the new home.

Nick and Sonja are proud of both projects: “They are both pretty much as we had hoped for and there were not many changes from the planning drawings – an indiciation they were planned fairly well from the outset. We have received lots of good comments from friends, neighbours, other villagers and tourists. My favourite thing would be the great views from both houses. Both have achieved good open plan living spaces and we love the cinema system in the lounge of The Old Chapel – we will miss it greatly. Thinking about whether, looking back, we would have done anything differently, we would have tried to get a slight increase on the ridge height of the extension to The Old Chapel to give increased eaves head height over the oak balcony.”

This wasn’t the couples first renovation project and it doesn’t look to be their last, as they say they will soon be looking for a new project. The advice they would like to offer fellow self-builders and renovators is: “Try not to get disheartened on the way through the process, which is quite complicated. There will definitely be ups and downs and it will be okay in the end – if it is not okay then it is not the end!”

The Old Chapel has now been sold to new owners through estate agent Savills.

Tweet
Rate this item
(1 Vote)
Published in Innovative Homes
Tagged under
More in this category: « Thinking outside the box Self-build caters to the needs of a family and business in Aberdeen »
Login to post comments
back to top