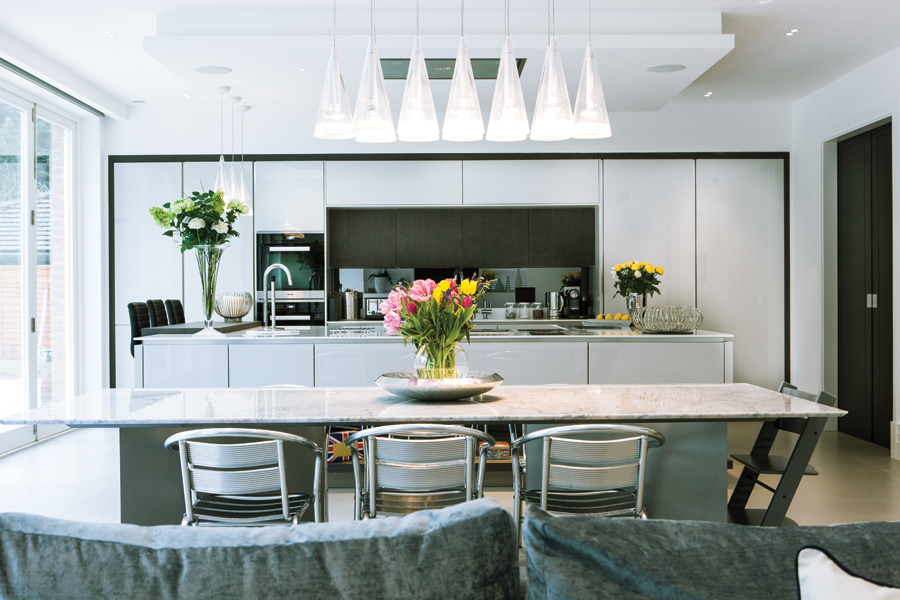 Jonathan Ellis and his wife Chloe bought a 1960s brick house with the view to renovate, but when the extent of the work needed became apparent, they decided to knock it down and self-build in its place.

When property developer Jonathan Ellis bought a 1960s yellow brick house in Totteridge, London, the plan was to renovate and extend it into a large family home for his young, growing family. However, the 2300ft² property was cold, dated and verged on unsafe.

Jonathan explains: “Living in that property for five months was horrendous. We experienced numerous problems, including a serious subsidence issue. If we had renovated we would have created a white rendered box, which really isn’t to my taste. The answer was to knock the whole property down and build something new in its place.”

Jonathan and Chloe's main motivation to self-build was the opportunity to upsize and build a house which would reflect their personal taste and needs. Jonathan worked closely with his internal architect (Sophie Smith) and contractor (Construct I.D.) to finalise the plans for the new family home and was able to utilise expertise within his company, Hamilton Court Developments. Although initially having to compromise on size to obtain planning approval, consent was granted fairly quickly which meant that the ‘fun part’ could commence.

Work started on 1st February 2014, with Jonathan on-site as much as his full time job allowed. He explains: “Chloe was so understanding considering that I was here late after work and every Saturday, getting stuck in with all the different elements. The thing is, if you want the result, you really have to go that extra mile. Any self-builder will appreciate that this isn’t a job for the faint hearted; if you want to do it properly it has to be a full-time commitment. At first Chloe and I were excited to get the house finished as quickly as possible so that we could enjoy the space we had created for our family, our motivation was exceeded by sheer determination after the first month on site when we found out that Chloe was pregnant with our second child.”

Industry insight
Having worked in the building and development industry since leaving school, Jonathan not only had experience to fall back on, but also had a 'black book' full of useful contacts he was able to call upon without needing to spend precious time carrying out research: “If I knew nothing about building and had zero contacts then this would have been a very daunting task. The fact that I could use my skills from working in the industry was a huge benefit and being surrounded by industry professionals in my everyday work certainly helped.

“Anyone in this industry knows that you face both good and bad days when building a house. Having this knowledge and experience definitely helped me as I knew what I was up against – you have to accept that you will encounter problems, but also know that you will figure out how to work through them. There were so many decisions to make when self-building. I’m fortunate in that I’m a very decisive person so I know what I want, but coordinating my own build was far more challenging than professional projects I have worked on due to the emotional investment.”

Jonathan had a clear and decisive vision of what he wanted his home to look like. It was important to him that when he opened his front door he would feel an instant sense of satisfaction. A key design catalyst was the vision of looking through the front door, past a big table with decorative lighting and on through vast glazing into the back garden. Symmetry, aesthetics and attention to detail were essential ingredients for the new home, however, Jonathan had to come to terms with the fact that sometimes the ideal vision is not alway attainable in reality.

He explains: “I’m a perfectionist, which can be tricky when building your own home. Self-building enables you to strive for perfection – more so than buying a house which is already built to someone else's specification. However, you would never move in if you waited for eveything to be completely perfect. I learnt that there has to be a point at which you accept the work as it has been done, otherwise you will end up driving both yourself and your builders mad! My standards are exceptionally high, but I have accepted that this is a house built by human hands. When self-building there are times when you just have to accept there is never going to be a house where every minute detail is perfect – it isn't realistic.”

Detail and remodeling tradition
The finished home embodies the stunning, initial impact that Jonathan dreamt of and worked hard to achieve. The oversized 1.2m wide front door opens into the impressive triple height entrance hall. From here you have a clear view through the spacious, open-plan kitchen/dining/living space to a large picture window standing 2.4m wide by 2.7m high which looks out to the back garden. To the right is a formal living room and to the left a large study. The modern kitchen is home to a secret door – disguising itself as a kitchen cupboard – that leads through to the garage, utility and children’s playroom.

The airtight structure benefits from triple vented windows and underfloor heating – warmth is enhanced by a wood-burning stove in the office. Modern accents, such as chandeliers and artwork, create interest within the large rooms. Considered details highlight Jonathan’s meticulous approach to specification, such as the bespoke staircase carpeting which is a contemporary twist on the traditional painted staircase with carpet runner. Meanwhile, the channelled blind recesses in the open plan kitchen/living space and shallow alcoves throughout the property are a clever and neat way to provide space for television screens.

Downstairs, the basement is home to a high-tech cinema room, as well as fully equipped gym and games room which is divided by a stylish full height glass wall. Jonathan’s penchant for creative and innovative design is clearly evident in the Cinema Room where he has incorporated a raised floor and staggered wall with LED strip lights which creates the look and feel of a real cinema.

The first floor has four bedrooms and three bathrooms. Unlike a lot of the house, the two children rooms are not Dulux 'Polished Pebble' grey, but instead a warm almond hue. The original floor plan incorporated separate en suites for these rooms, but during the build it was decided that they would be linked with a connecting bathroom to both suit the lifestyle of the young family and to allow space for a large utility room on the landing.

Glass balustrades, supplied by Glass and Stainless Ltd, wind up from the basement to the second floor, which has another bedroom and open space that would work perfectly as another living area.

The master bedroom on the first floor leads onto a large balcony and benefits from a hidden walk-in wardrobe. Jonathan explains: “I’m happy with how it’s turned out and I can’t wait to open the doors onto the balcony in the summer! I’m really pleased with the bepoke bedhead because I was able to have it made, it was less than £300 and is the room’s focal feature.

“I’ve been careful to keep the design commercially viable. There aren’t too many details that are purely for us, so it’s a very sellable house. I would 100% self-build again. It’s hard work, but ultimately great fun. Even if we didn’t self-build, we would want to completely gut a property – I think I’d struggle to live in a house that someone else has lived in. I think the brand new feeling is addictive – the first night in this home was amazing!”

In December 2014 the family moved in – an impressive 10 months after work had started. Jonathan concludes: “My advice to other self-builders is to not get too carried away. I stuck to my plan because I had the experience to be able to understand what I was doing from the outset, but it’s still hard to quantify how much you actually end up spending on top of the actual building cost. In a project like this £5000 can disappear in the blink of an eye and there will constantly be opportunities to up-spec. There is always the temptation when building your own home to over spend in the hopes of making it better, my advice would be to think carefully before you decide to spend more money. In my experience often it is better to spend time on your attention to details than it is to spend money on something that you don’t really need. Overall the experience has been educational. Building a house of this size in 10 months without compromising on the design and aesthetics has been a testament to those involved in the project.”

More in this category: « The untapped potential of a dated bungalow A glass act »
Login to post comments
back to top