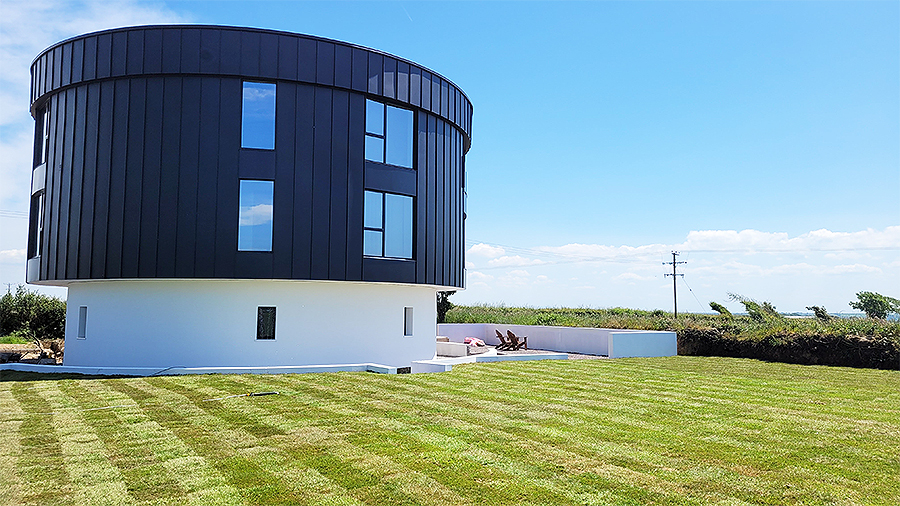 Here at i-Build, we’ve been following Rob Hunt’s water tower conversion for quite some time. Throughout the past two years, we’ve been avidly watching Rob’s inspirational progress as he battled the complexities naturally associated with curved concrete structures. Unsurprisingly, when Rob informed the i-Build team that his build was completed in September last year, we were elated to see the final result.

The conversion of the water tower has been so successful that it’s caught the eye of many homebuilders and renovators and has earned a spot on Discovery+’s Derelict Rescue.

Here, Rob talks to us about what encouraged him to take on such a mammoth conversion project, and we learn more about his journey of transforming a water tower in ruins into one of the most spectacular homes we’ve ever seen!

“I’ve always wanted to do something just that bit different with a property project, but it was either not the right time, nothing close to home or, indeed, not having the finances available to pull it off.

“I was living in my three-bed semi, working in a factory (for the past 17 and a half years) and had three rental properties for a bit of extra income. I’ve always been keen on DIY and getting involved with some aspects of keeping the rentals up to date.

“I was scrolling through Zoopla, or Rightmove, one evening, as I used to do from time to time, just to see what was about relatively local to me, and the water tower came up (which was only 20 miles away from where I’ve always lived, Barnstaple in north Devon).

“Straight away, it caught my attention, and I could see its potential. It was up for sale for £160k, which seemed relatively reasonable for the area, land and building. It was built in 1949 and came with half an acre of land and 400m² of internal floor space.

“It was late September/early October 2019 when I phoned up the estate agents to enquire, and a week or so later, I was viewing it for the first time. I guess not everyone has the vision to see what something could be. It had no windows in the main tank, so you couldn’t see what views you would get, but I could imagine it for sure. The concrete ceiling of the tower caught my eye as well, and that one feature definitely had me thinking that this could be something special and a one-of-a-kind property.

“It was being sold with planning permission already granted, but I didn’t like the design that had been put forward at all. From viewing it, I set about sketching out my own ideas, room layouts and designs etc."

Rob continues: “A couple of viewings later, along with my dad and a few friends in different trades, I put an offer in of £150k. A couple of days later, it was accepted. It was in early December 2019 that I actually started doing some work on site before or after my shifts at the factory.

“As work progressed into 2020, I set about plans to sell my rental houses and my own house to move on site in a mobile home. I moved on site full time in July 2020 and also quit my job at the same time so that work could really get going on the tower. It was always the plan; this project was, for me, a way out of the mundane factory life that I had done for so long and my one big opportunity to make something of myself and to set myself up better financially, for my daughter and me when she’s older. It was never just a job, but a way of life.

“I was the project manager and main labourer for the whole build; living on site and working all hours of the day was where I could save a lot of money. My main building contractor worked with me four days a week almost through the whole process and then all the other trades as and when, many being friends and/or local as best as possible.

“About halfway through the build, COVID-19 happened, and prices of a lot of materials shot up. I would say I was just in front of the majority of hikes, but it definitely didn’t help my budget, that’s for sure.

“The project has taken three years total with a few bits here and there to still finish. For example, the double garage, outside patio areas, ground-floor bathroom and master dressing room indoors. The big push was to get it to a stage where I could move in, and that ended up happening in May 2022."

Rob reflects: “I was very naive going into it with the budget, saying that I was hoping to spend up to £500k. In reality, it will come at around £750k, all completed. There is no doubt I saved a lot doing what I could, but with a building of this size and shape, along with the high spec, I felt that the place deserved it and was always not going to be cheap.

“I’m thrilled with how nearly everything has turned out, from the bold choice of the jet-black cladding to the room layouts and decoration inside. I had two separate valuations on it about six months ago of offers over £2m, and I wouldn’t want to sell it for less after all the hours and dedication I’ve put into it. It’s also so unique that it’s worth more to the right buyer. As it stands, I am going to list it for sale in spring/summer 2023.

“I would say to anyone in a similar situation to go for it! Just be aware it’s more than likely going to take twice as long and cost twice as much to complete but it will still be 100% worth it!”

More in this category: « Meet the RIBA 'South West Building of the Year'
Login to post comments
back to top