A home with a view in Dalgety Bay 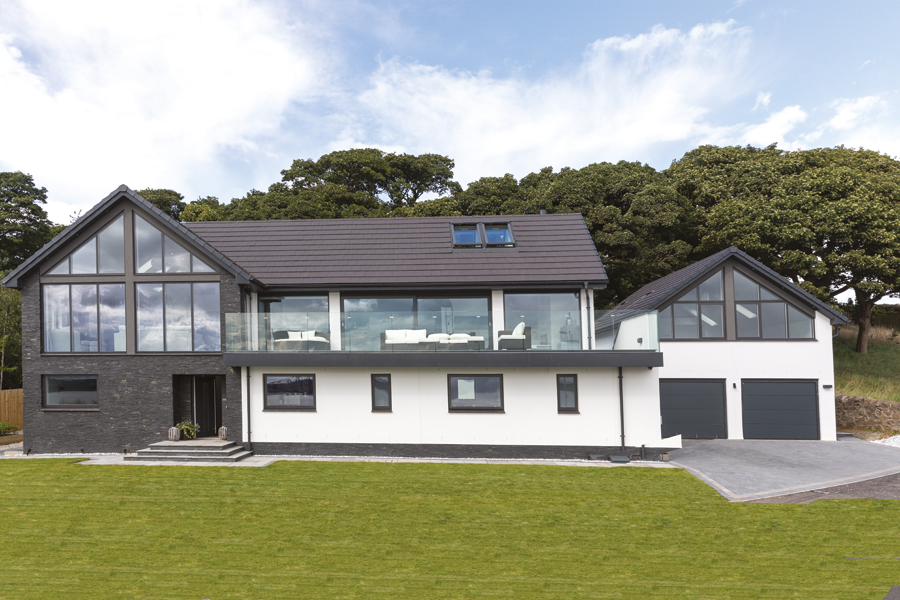 Alan Brown and his wife Lucy have always had a passion for the outdoors and wanted to experience it in their dream home by bringing natural daylight into their house. And that’s exactly what they’ve achieved at the aptly named Glasshouse – a home that took them 15 months to build – in Dalgety Bay, on the banks of the Firth of Forth in Fife. But it came at the end of a very long search.

Alan and Lucy, who have twin daughters called Chloe and Amy, had looked at more than 50 properties in the area.

Nothing had excited them until they were walking their dog one day and saw a for sale sign next to a patch of overgrown woodland that overlooked the Forth Bridges.

Alan explains: “I was out walking one day and I saw a piece of land for up for sale. We wanted to stay in Dalgety Bay because we love this place, so we’d viewed about 50 houses or so, but nothing was ever right – there was always something missing, there was always something wrong – the wrong facing back garden, it didn’t have the right spaces or it was the wrong price point. Then I saw this piece of land and I thought I’d ask about it. I phoned on the Monday and when they told me the price, I thought they were joking! I couldn’t believe it.

I had to put a bid in by the Wednesday so it was quite quick. I was the highest bidder.”

Alan phoned a local estate agent who said it was going to a closing date in two days so the couple quickly put in an offer of just over £31,000, which was accepted.

Alan said: “I’d done a bit of research from the Monday to the Wednesday. The plot had no planning permission so it was a bit of a gamble. Once the land was ours, we went down the route of trying to get planning permission. We talked to our architect who advised us to spend time with him designing our dream home before applying for full permission on an architect-designed property. I was told the best way to get the planner to take us seriously was to show them that we weren’t just asking for planning permission to add value to the land – you’re better off putting in a full proposal with plans for the house and giving the history of yourself, so that’s what we did. It worked as our local planning department accepted it straight away. We were lucky enough to get planning permission no problem whatsoever.”

The house was built between December 2015 and January 2017 and is ‘upside down’.

“The design of the house took a while to get right,” explains Alan. “It took us a while from buying the land, drawing up plans and building. We’d never done this before, so we left quite a lot up to the architect initially, but obviously we had our wish list. As we went through the process, we learnt more about it. When we saw the design of the external of the house – we designed it from the inside, out and loved the internal areas – we thought the outside was ugly!

“We originally designed a two-and-a-half-storey house – we’d got planning for that house – but only then, when we saw the pictures, we thought, we can’t build that, it’s ridiculous – it looks like a multi-storey car park! I went to the architect and said we don’t want that, it looks awful!”.

It had already cost the couple a lot of money to go through the whole process and the value of the land had rocketed to seven times what had been paid once they had gained planning permission.

“I started to think maybe I should just sell the land. We pondered on it and the architect said that he would slash the prices that we’d been charged to design the house and we then thought, let’s do it. This time, we knew the whole process, so we took control designing the external of the house and mucking around with the internal areas too, so we sat down with them and designed the house how we wanted it. We went from a two-and-a-half-storey house that was really ugly, to a what we believe is lovely.”

There are four double bedrooms with en-suite bathrooms downstairs and an open-plan kitchen/dining/living area upstairs, taking full advantage of the incredible views over the Firth of Forth and Edinburgh, and to allow more privacy from passersby walking along the nearby Fife coastal path route.

An abundance of natural daylight floods through the home from 11 VELUX roof windows and glazed exterior walls. A unique and stylish glass panel measuring 4m² on the first floor allows light to stream into the hallway below with recessed LED lighting making it a striking feature after dark.

Alan wanted to install a large number of VELUX roof windows to ensure high-quality living conditions, with lots of daylight and fresh air, for his family.

Alan said: “The roof windows in the living room turned out exactly as we wanted and is my favourite part of the house. I had an early vision of us sitting on the couch in the living room in front of the log fire looking up at the sky watching the stars or the snow falling on the windows during winter. It’s a view we’ll never get bored of.

“I didn’t do any hands-on building, I’m dreadful with anything DIY, but I did project manage the whole build. I was on site every day and we built every panel on site, so even down to where the windows were, I would move them if I wasn’t happy or they didn’t sit right. The whole house is very personal to me, every socket location, every light switch, everything – I had a say in and everyone knew if they made a decision when I wasn’t there, when I turned up, if I didn’t like it, it would be moved. I was almost OCD about the build, but you only get one shot at building your dream house. It would be amazing to be able to do it again, but financially, I put everything into this and I’m never selling it, but it would have been brilliant to have been able to have sold this and made money on it and then gone on to do it again, but there’s no way I could sell this because it has been designed for our family and we’ll never get another site like this, with the views we have.”

The home also has a purpose-built luxury garage split over two floors. The ground floor has room to park two cars and then opens up to a carpeted hallway with an en-suite shower room and a staircase leading to the first floor that opens up to an open-plan, one-bedroom studio apartment that mimics the decor and feel of the main house.

The garage was a last-minute addition after their plans changed from a three-storey house to a two, resulting in the ground floor of the original plans moving to the new garage.

Although Alan has installed LED lighting round some of his windows and the staircase leading from the ground floor to the first, he can mostly do without artificial lighting – even on cloudy days.

Alan said: “So although it’s been a long journey, and at times stressful with the odd hiccup here and there, we’re absolutely thrilled with the end result and love the look and feel of our home. I don’t think we’ll ever get bored of looking out over the Firth of Forth to the iconic Forth Rail Bridge. I’d advise anyone who was planning to self-build to just enjoy it. I totally loved it. I didn’t want the build to end. It’s so worth it.”

More in this category: « A daring duo commit to a cliffside self-build in Worcester without viewing the plot A home that erupts style and innovation »
Login to post comments
back to top