Duo succeeds in concurrently growing a business, planning a wedding and building a home 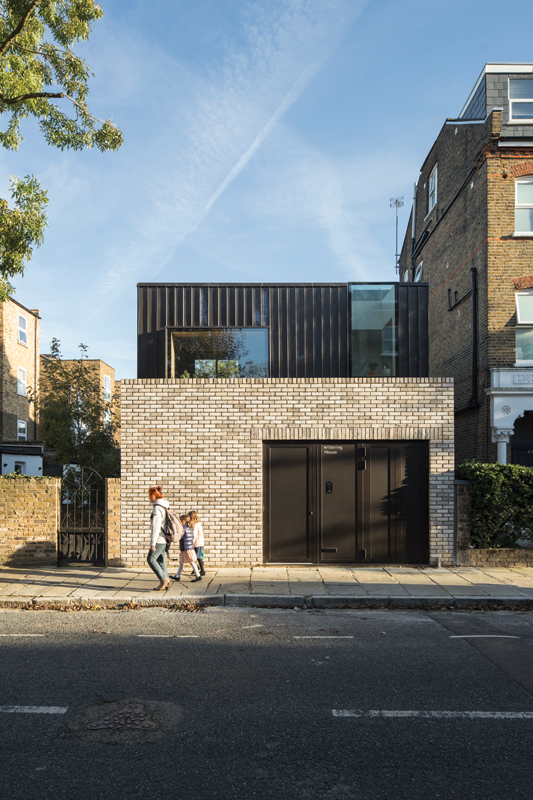 Wittering House is a stylish home built on a difficult infill site in Finsbury Park, north London. Contemporary in design, and providing a discreet intervention in a street of Victorian houses, the 829ft2 two-bedroom home is a contextual and sympathetic response to its location.

The modest yet elegant two-bedroom house is on the site of a small derelict garage. Architect Charles Bettes spotted the potential of the small plot, measuring a mere 6 x 7m and set about creating an affordable home for him and his wife Vicki Lim-Bettes. Charles explains: “This is the only way we could afford our own house in London due to house prices. It was hard to find good quality space to live in the area we’d decided to call home.

“In London, prices keep on rising and quality homes are very much out of most people’s grasp. The flat we lived in before was poor quality both in terms of build and its layout. If this opportunity hadn’t come along we would have spent a lot more time in such places. This project shows there are ways for people to make themselves a home in London that fits them without paying obscene amounts of money.”

The challenge faced by Charles was how to create a comfortable layout and a relaxing home on the tiny site surrounded by Victorian terraces. gpad london delivered a contemporary design without being incongruous with the other buildings in its vicinity. Set over three levels and clad in brick and bronze, the house feels larger due to careful consideration of every inch and clever use of dual aspect rooms with a lightwell and free-flowing spaces. This is further complemented by a coherent material language and a subtle palette of muted colours.

He explains: “Living in a space that has well-proportioned rooms and a thoughtful layout has been so much more relaxing than the previous flat. The site was tiny and the house we have ended up with is not large, but the spaces don’t feel small. It highlights that with a thoughtful and well-considered approach to a site, decent spaces to live in can be produced.

“We wanted a ‘modern’ house without it being a cliched white box with huge amounts of glass – this would age badly and isn’t really livable. We needed a stripped-back, homely and clutter-free home, with plenty of storage space. It needed to represent our personalities and be fun, but still relaxing and easy to keep tidy. Our house has a contemporary feel, and it’s warm rather than stark and empty. We had to have plenty of light and an airy feel.”

Charles continues: “There was no set project brief other than to maximise the small site and create a great home for ourselves. Other than that the scope developed as we progressed.

“The site was very small, so this drove a lot of the decisions. We wanted the maximum internal dimensions possible, while allowing enough light and air to enter the house so that it didn’t feel cramped and enclosed. In plan we made sure that the circulation space was minimal so that the rooms could be as big as possible and to eliminate any wasted space. The entire planning process took nine months and the entire project took just 10 months – we remained within budget.

“Since we only had 10 months for the entire build, timing was challenging. The short timeline meant we made some of the material choices once the builder was already onsite. The plot itself was also a challenge due to its limited size. The success is, therefore, testament that with an innovative layout and a thoughtful, well-considered approach to a site, you can produce quality living spaces, even without a large budget.

“We designed the whole house together and I produced all the drawings and information for the build. Much of this was finished when they started on site, but some was designed and detailed whilst they worked. My role for the first few months was making sure that I stayed ahead of the guys on site and fed them the design information needed. We only visited the site once a month for the first half of the build.

“In the second half of the build, many of the decisions were made on site and were in relation to finishes. We would go on site weekly and meet the sub-contractors, joiners and specialists to discuss what we wanted and make decisions. Some things were not completely detailed so this was stressful, as the contractor sometimes needed immediate responses.”

Since Wittering House is located in Finsbury Park, north London and surrounded mainly by Victorian terraces, the homeowners wanted the property to be a sympathetic response to its environment as well as being a contemporary addition to the street.

Charles explains: “The materials were selected to respond to the scale of the materials and buildings around the site, but to mark the house as its own building – one that is contemporary in design, without being loud.

“We wanted finishes that were subtle, with depth, texture and colour to them. We also wanted the materials and spaces to have weight, quality and substance. They also need to age well and have little or no maintenance requirements. The site is very small, as is the house. The materials needed to reflect this scale as well as those of the buildings around. In this way, all of them have a very human scale that is easily understandable and is in no way overpowering.

“The brick and brass on the outside of the building will weather well and will require little maintenance. Depth to all the materials is key, so the glass positioning in relation to the cladding and the way the windows move in and out was key.

“The interior is on three floors; with the first floor containing the master bedroom, a dressing room and en-suite bathroom, the ground floor an open-plan space with the kitchen, dining and living areas as well as a small courtyard and the basement which consists of a guest bedroom, study, storage room, bath and a lightwell.

“The inside materials are chosen to complement those used on the outside and were selected with similar drivers in mind. The whitewashed oak, grey brick and light resin floor of the living spaces reflect the natural light well and provide a space that is subtle and not overpowering, but which also contains a lot of textures and warmth so there is variety without being overpowering.”

The sleek, warm and subtle interior is relaxed and calming, with whitewashed oak panelling and resin floors.

“The final property is better than we hoped. Our day-to-day life is far more relaxed and comfortable and this is down to the house. We have a home that is definitely influenced by us and how we want to live.

“The living room has great light and is a nice volume, with plenty of changes in the space throughout the day. Opening the doors onto the courtyard and relaxing on the sofa is very enjoyable.

“The only exterior space available on the plot was the patio. For simplicity this is paved. It’s designed to be an extension to the living and dining spaces, so the brick forming the courtyard wall flows into the internal space further merging the two.

“In hindsight, we would not approach the project whilst trying to balance a wedding, growing a business and being involved with an office move so we could be on site to enjoy it more.

“Trying to be involved and make decisions on the project was very stressful with a particularly busy and stressful timetable of work, family problems and wedding planning. In the early stages this was easier as much of the work was designed and a lot of it was work in the ground and with the structure so we weren’t on site or called upon too much. Over the last few months, however, there were lots of decisions to be made and sometimes it all felt like it was getting out of control. The builders were great and we are really grateful for the care they have put in. That said, if we had the time to be there every day or the time to really think through decisions, we would definitely have done a few things differently.”

When asked what advice Charles would offer to anyone considering starting their own self-build journey, he said: “Do it. It’s a really interesting process and allows you to really think about how you want to live and what kind of places you like. Sometimes you take for granted the quality of accommodation you have. When you build yourself you really think about what you do and don’t like. It is very satisfying to sit in a house you have been involved with from scratch.”

More in this category: « Why one family added a side return with a pitched roof and large skylight onto their home How one family in Highbury have transformed the way they live with a simple extension »
Login to post comments
back to top