Victorian property complete renovation – all thanks to a wine club subscription 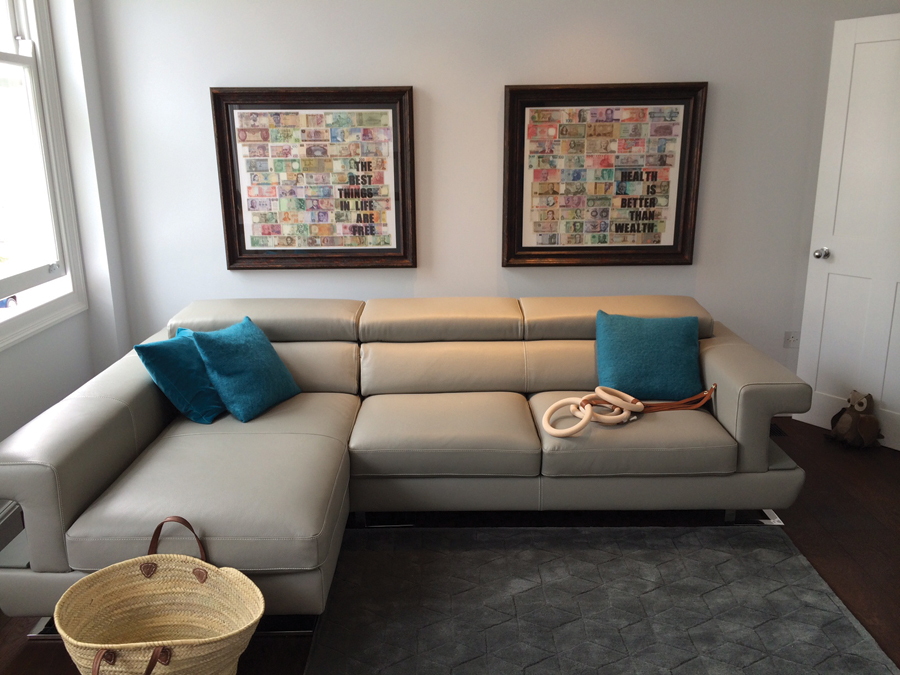 When Melinda Swan bought her husband a subscription to a wine club as a Christmas present, she couldn’t have foreseen that his hobby would play such a big part in a major home refurbishment.

Melinda and husband Chris, Managing Director of a trading company in the city, were looking for a project when they found their Victorian home in Radipole Road, Fulham.

The front door with its beautiful leaded glass instantly gave them hope that they would find a traditional house that hadn’t had too much renovation already. And they did. Owned by a couple in their 80s, the house was still in its original state.

“The house was in the ideal location, but there was a huge amount of work to be done to get it just right and match our needs. Since the location was exactly what we wanted, we decided to go ahead and take on the challenge of turning the house into our dream home.

“The property had a good feel, but it had very little light and the flow of rooms didn’t suit our needs. So, it definitely needed some changes if it was to be the home that we envisioned.

“It hadn’t been touched for years. It was sold as a five-bedroom house but the rooms were small and pokey. The boiler was in the dining room with a table in front of it where they used to sit,” says Melinda.

“The coal bunker was still downstairs and when we took down the curtains a dead mouse fell out. They were elderly and hadn’t had the energy or inclination that we had so it wasn’t their fault and it was a bonus for us.

“We had always felt that we wanted to pursue our own project. As a result of years of travel and living abroad, we had accumulated and assimilated good ideas for incorporating into our London home. We wanted to bring these ideas together to make something unique to us – taking the best of what we’d seen and experienced over the years.”

At the time Melinda owned her own company providing lifecycle management for pharmaceutical companies which involved a great deal of world travel and staying in hotels.

And as the work on the property progressed, all those years of travelling began to pay off.

“I realised how many ideas I had absorbed and filed away. Hotels are great for picking up trends and ideas to use in your own home. I had lots of creative examples filed away in my brain,” says Melinda.

She says working with SDA brought home to her the importance of choosing the right building firm.

“They ticked all the boxes for us,” she says. “Sammy and his team proved they could work as a team in harmony with an array of experts such as architects, energy and lighting consultants and they were able to deliver a high-spec product at every turn. They found solutions to problems and alternative ideas when there were issues.”

And, importantly, Melinda says they came in on budget and finished on time.

“It was predicted that the refurbishment would take nine months, and we were delighted that we were able to move in on the exact date that Sammy had previously advised. Unheard of, but so rewarding.

“We remained within the original budget for the build, but the furnishings I selected were not within the budget…one always finds something nicer at a higher cost.”

Although she had never done anything like this before, Melinda’s first priority was to make the house light and airy.

“The watchwords throughout the project were light, bright and with a flow. I wanted light and more light. The rooms were very dark and I also wanted the house to flow and that meant taking out doors to open it all up.”

It also meant taking out the first floor to create a stunning, show-stopping galleried dining room which is now bathed in natural light and perfect for entertaining.

“The original building felt unloved and needed to be invigorated to meet the needs of a family in the 21st century. Based on this, we ‘re-Victorianed’ the entrance of the house but then modernised the inside.

“We only have one child (now grown up) and we didn’t see the need to have a family room so we took out a bedroom and bathroom to create the height. The glass wall upstairs is at waist height and lets in lots of light from above. It was a bit of a folly really to suit the family but we absolutely love it and heating it is not a problem as we have underfloor heating throughout. Underfloor heating, below wooden floors or tiles, allows one to negate the need for unsightly radiators – and frees up a lot of additional space.”

There are now four bedrooms and four bathrooms upstairs in the property and a side extension allowed Melinda and Chris to create a beautiful light and airy kitchen.

Chris’ only request had been for a wine cellar where he could store and build on his collection which was rapidly growing after that fateful wine club subscription and so they dug down into the basement to create one, along with a utility room.

The cellar had to be sealed and a unit put in to keep a steady temperature for the 2500 bottles it now houses.

“We were so lucky to find this house. We didn’t think there could be much left in London that hasn’t already been renovated but this was untouched. It was like having a blank canvas,” says Melinda who admits she would have felt guilty ripping out fittings that had been added recently.

She found Samir Ene (known as Sammy) on a website for master builders. His company, SDA Build London, is passionate about delivering high-quality specification, and to date has completed 65 projects in just over six years in and around the capital.

“I phoned him and asked for references, and I liked what came back and the work I saw. He was also good at listening, really listening, to what I was trying to convey,” says Melinda.

“I worked closely with Sammy and amended the design brief as and when required. It’s important with a project this size to have a willingness to be flexible if needed – you just don’t know what you’ll uncover. It’s also important to listen to the advice of the experts you’ve engaged to ask lots of questions, so you understand the what and the why.”

Although she was clear about what she wanted, the key to the success of the refurbishment, she says, was conveying her ideas and having builders who had empathy with what she was trying to do.

“If you have a good builder, you have to work at communicating with them – they are building your dream but that dream is inside your head and they can’t know what you are thinking if you can’t tell them clearly.”

Despite that, she says she sometimes wondered what she had taken on.

“A lot of the time I was out of my depth and there were days when I thought we were all speaking a different language. I didn’t always know what some of the phrases they use in the trade meant.

“So, I found myself Googling lots of words I didn’t understand and I bought a raft of books about building techniques and Victorian properties,” says Melinda.

“I spent hours on the internet and visiting sites to select products which would add to the build. I wanted to make my own decisions, understand each material and see it in ‘the flesh’ before making a final decision.”

Although she wanted the builders to create her dream home, Melinda says she was also adamant she was going to remain sympathetic to the style and history of the house.

“I have always believed we are only ever caretakers of our properties, they will be here long after we are gone,” she says.

“Sammy and his team fulfilled our dreams! It provides sharp clean lines, and has an urban feel, which is ideal for a London home. And yet still retains some of its original Victorian character.

“We love the kitchen, with its mirrored skylight; the media room which has a lot of light flowing in from below from the gallery windows; the double-heighted dining room is a show-stopper and perfect for parties; the wine cellar a hit with men and perfect for pre-dinner canapes. Most of all we love the urban sharpness of the house.”

Sammy, who started the business in 2011, says his company prides itself on good results which he says is down to proper consultation with his clients.

He says: “I consider myself a field person. I don’t want to be in the office so I visit my sites every day and have weekly meetings with my clients. That way, there is less room for mistakes and every chance of getting it right.”

Melinda advises: “Find the right builders and stick to your dream. Be brave and be bold; one doesn’t often have the opportunity to get what you want.”

More in this category: « Robert Dunn has created an energy-efficient holiday home property that has been constructed using over 500 bales of straw A reflective reading room »
Login to post comments
back to top