HomeFeaturesInnovative HomesDorset couple Charles and Pennie give us the grand tour of their cantilever, one-storey build
02 Oct 2017
0 comment

Dorset couple Charles and Pennie give us the grand tour of their cantilever, one-storey build 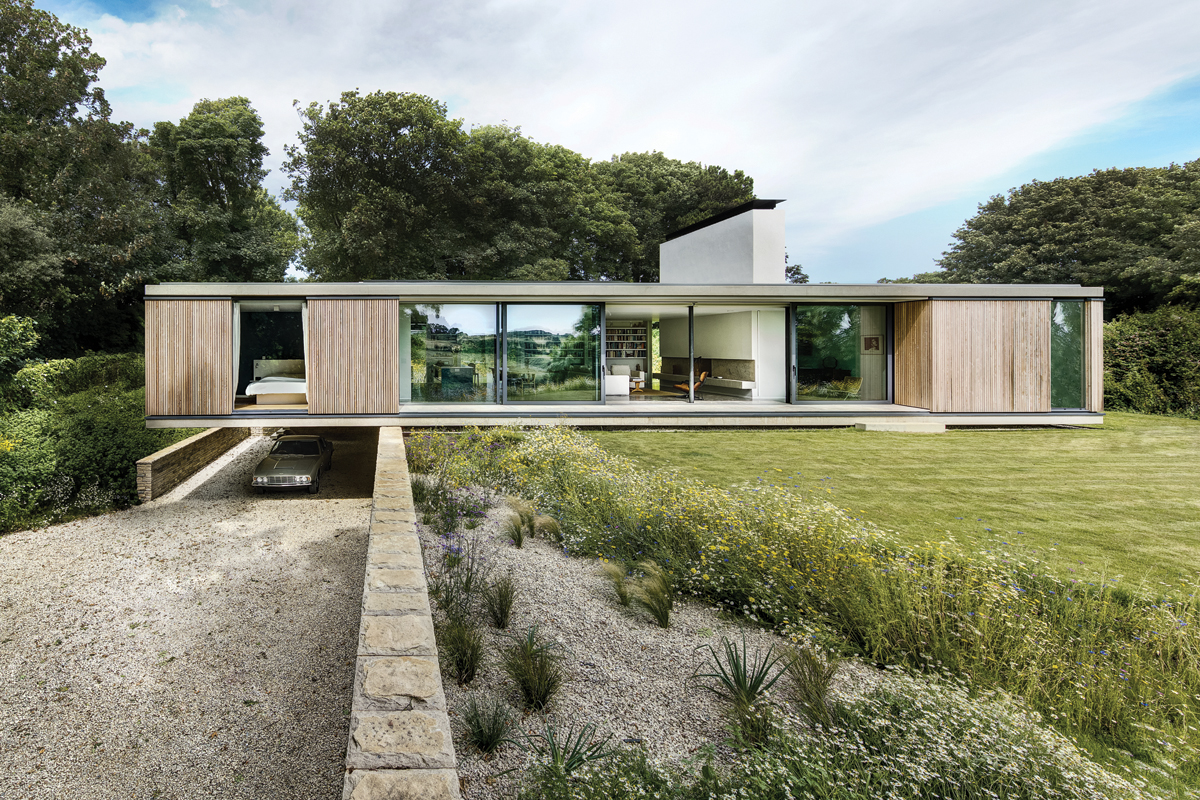 Situated in a heavily wooded site, ‘the Quest’ is a replacement self-build in Swanage, Dorset. Overlooking the picturesque Durlston Country Park, the sloping site – home to protected mature trees – played a key role in dictated the positioning of the dwelling.

Designed by Lymington-based architect practice Ström Architects, the advantages of a single-storey building that would suit the retired client’s future needs were recognised early on. This offered an elegant solution to the steeply sloped site and allowed a simple arrangement of spaces. At the same time, this design has reduced the aesthetical impact from across the valley when looking back towards the house and helped the scheme from a planning point of view.

Access is via the front of the property, therefore, Ström Architects made use of a retaining wall, faced in local Purbeck stone, to define the different levels and visually mask the vehicular route, maintaining a clear view from the living spaces across the valley.

The single-storey house cantilevers over the retaining wall to deal with the level changes and views. The large cantilever has been achieved through two concrete planes; the floor and roof acting together like a space beam. The concrete structure was then in-filled with simple timber dry-lining, leaving the concrete frame visible externally.

The owners, Charles and Pennie, started the project in 2014 – when planning permission was granted – as Charles explains: “At the time, I worked in film and television and Pennie was a Librarian and BBC TV Researcher and Writer. We were aged 75 and 77 when we started the project three years ago.

“We did not plan to build our own house but when the opportunity presented itself (we saw that an old bungalow just above where we lived was for sale) we only took a second to decide that we would knock it down and build a new house in its place.

“Pennie and I sought to create a beautiful house filled with light. As, collectively, we have a shared interest in architecture and buildings and had already converted a number of old houses, to build a house from scratch seemed an exciting project for the both of us.

“We wrote our brief to Magnus Ström, our Architect at Ström Architects, on two sides of A4. It covered everything we wanted and required. Our project needed to include a bedroom for our disabled daughter who spends every other weekend with us.

“As we were in our 70s, we tried to look ahead and anticipate our future needs. Therefore, the house is single-storey, accessible by a wheelchair and has a spare room where a carer could stay. We chose the site because it has a lovely view over fields, trees and the sea; it faces south and is surrounded by trees in a very peaceful location.

“There were no problems getting planning permission; planning was granted in 2014 and the build completed in January 2016.”

“With regards to renewable technologies, we were keen to take advantage of new heating technology by installing an air source heat pump. We also opted for a rainwater harvesting system from the roof to be used in the garden. The house is all but ‘passive’ – it cannot be completely as we wanted a fire and there is, therefore, a chimney.

“The project took 15 months altogether. There were slight delays following the discovery of an 18th-century stone quarry on the site which had to be filled with foam concrete. Because of the extra work to fill the quarry there were additional costs to our estimated overall spend.

“Pennie and I were also keen to incorporate local stone where practicable. The site was on an old stone quarry tip. There is a large Purbeck stone wall along the drive and entrance to the parking area.

Benefiting from the site

“Wishing to take advantage of the south-facing site, windows have been placed along one side of a large family room with a kitchen, dining and sitting room combined. We both wanted a separate study, three bedrooms, two bathrooms, a utility room and cloakroom.

“There is a footpath passing the house and many, many people stop to admire it. People viewing it from Durlston Country Park to the south comment on how well it fits into the landscape.

“We pinch ourselves every day to make sure that we are not dreaming: the house and the way it works is perfect and we love living in it.”

Charles’ favourite part of his home is sitting by the fire on a cold winter evening, whilst Pennie loves the secret larder hidden behind an ordinary-looking kitchen door.

“For others embarking on a self-build project we would warn that it will probably take longer than you anticipate and cost considerably more than you first hoped. Having said that, we did not find the whole process too stressful even though we had problems along the way. Perhaps we were fortunate in having a brilliant young architect and a first-class building team,” enthuses Charles.

He continues: “We wanted the house to be a beautiful addition to the area and to blend into the landscape. The planner’s only concern was that it should blend in with the landscape when viewed from Durlston Country Park. In order to achieve this we created grass banks, rather like the ancient lynchets – a ridge or ledge formed along the downside of a hill by ploughing in ancient times – of the area at the front of the house.

“We planted 10 trees and created a herb garden at the rear. In the front, we covered the rainwater tanks with local stone gravel and planted grasses, agapanthus and gaura. We planted wild flowers in the grass banks at the front and spring bulbs along the entrance drive and rear garden’s grassy bank.

“We also employed a landscape gardener to draw up plans but adapted them considerably with the local team we employed to lay out the structure of the garden.

“We think the large front lawn sets off the view of front of the house and the back lawn and bank create an amphitheatre for the drama of the house.

“We have a stone sculpture of a wild boar by Local Artist, Mike Bisley. Originally commissioned to go to Italy, it stands, challengingly, on the bank of the rear garden and is much admired by passers-by. There are also stone sculptures by Carlotta Barrow and Alan Marsh,” concludes Charles.

The house exemplifies Ström Architects’ belief that simplicity and honesty of construction underline good design. The initial concept and design drivers are instantly recognisable in the building, and the practice strives to retain this clarity of intent without adding anything unnecessary to the building. The firm thinks carefully about how it constructs its buildings and works closely with its engineers to ensure an architecture founded in such basic things such as structure, details, materials and order.

More in this category: « Three stone ruins transformed into a sympathetic conversion Priceless views »
Login to post comments
back to top