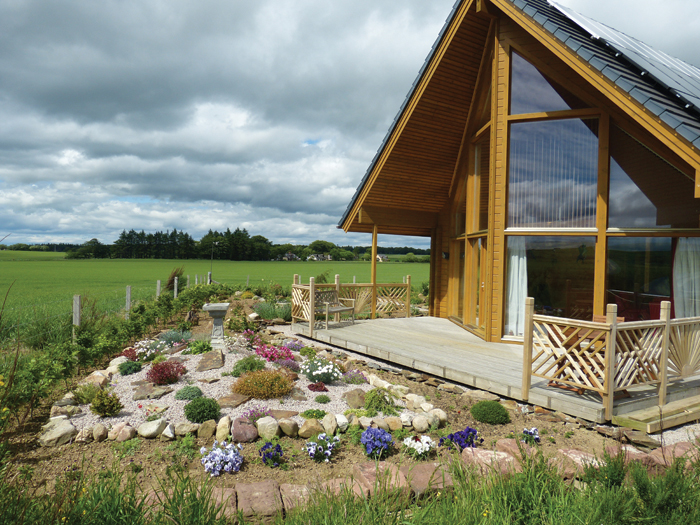 Following countless challenges with their new log home, Russell and Janice Quinlan waited two years before turning its bare surroundings into a vision of serenity.

When the Quinlans inherited a substantial sum they wanted to invest in something useful. Having lived in Woodhead of Fyvie, Aberdeenshire, for 31 years they were concerned that the village was starting to become overdeveloped. So, the combination of the two became the catalyst for embarking on a self-build journey.

Because Woodhead had been their home for so long they were keen to stay in the area and were delighted to discover an incredible rural site just a few miles from their home. “We wanted somewhere a bit different and a house that would complement it,” explains Russell. The plot was home to a traditional stone cottage that sat on the crest of a hill surrounded by amazing views over the Grampian Mountains. The plot appears completely isolated from the rest of civilisation, sitting alone amidst the stunning Scottish vista.

Inspired by a log home that they saw on Grand Designs, they looked for a design that would fit their budget and went to see an example. As a structural engineer by trade, Russell felt the log house designs looked strong, so they decided to go ahead with a Finnish package build, configuring the rooms to suit their needs at the design stage.

However, the project was not as straightforward as they had hoped as they faced a number of problems, firstly due to the rural location of the site. The plot had no amenities: no power, water, telephone or sewage – not even road access! “Being off the grid with no usable access road was an issue,” continues Russell. “The first job was to reopen the original track down to the main road. Once this was done and cored it was suitable enough to take the delivery of the two 40ft trucks that came to deliver the house.” This meant a pricey start to their self-build before any of the materials had even arrived!

The second problem they faced was with the log house supplier. “Because the supplier didn’t provide enough on-site guidance during the build we ended up with massive draught problems,” explains Russell. “It turned out that the supplier was basically a cowboy only interested in the sale and not the build. Luckily we came up with a scheme with our builder, Andy Gracey, to cure the draughts. We had such an issue finding reliable tradesmen. Eventually Andy brought in tradesmen who he knew were good, I didn’t have that original knowledge and as a result had to sack some of the original tradesmen as they didn’t finish jobs.”

Although Russell did most of the actual project managing, Andy really did most of the ‘on-site’ management. “We kind of found Andy by accident” comments Russell, “but he was brilliant at bringing in the trades needed to make sure the build continued. He always checked with us on any decisions and without his input it would have been extremely difficult. If you can’t afford to spend your own time or pay for a project manager, make sure the main trade are happy to take on-site control and keep in regular communication.”

Despite all the complications, a year and a half later the couple moved into their new home, called Long Rig, in the summer of 2010. The log house is everything they had hoped it would be. The lower floor is defined by a double height glass front area extending up to a mezzanine floor which has office space, a lounge area and a bedroom with en suite. The ground floor boasts an open plan living space along with a kitchen, bedroom, utility room and family bathroom. All exterior and interior finishes are Scandinavian Pine for that real log home feel.

“The property fits in with the surrounding landscape extremely well and it’s evolving as the timber ages,” continues Russell. The open-feeling house benefits from the fantastic views but Russell and Janice take comfort in knowing that Woodhead is only a few miles away. “We love the feel of being isolated with the knowledge that our nearest neighbour is only half a mile away.

Despite moving into their home three years ago, the couple left their garden bare for several years, exhausted from all the problems they had faced with their self-build. “Financially it wasn’t something we could afford to do straight away. Hiring diggers, buying red granite chips, the plants and the big granite block we wanted to mark the house entrance all cost money and so we waited until funds allowed us to make it what it deserved to be.”

After the build, the garden was left with two massive mounds of earth that needed to be redistributed around the site. Because they weren’t in any particular hurry, they had the flexibility to landscape leisurely, completing little bits here and there. The garden became an evolving space that has literally grown as more has been added to it over the last few years, finally completing their project last summer.

Janice has worked hard landscaping their self-build’s exterior, working completely independently without the help of a professional. As a result the garden is beautifully personal with modest accents that complement the grandeur of the new home. They have opted for no grass, but instead filled the space with lots of plants that blend with the landscape: bushes and small trees – such as laburnum and silver birch – with red granite chip footpaths and a surrounding beech hedge. The couple merely followed their instinct and went with what felt right.

“We built a decking area at the front of the house and a separate deck in the middle of the garden to house half-whiskey barrel planters which were sourced locally,” continues Russell. “Balustrades separate the garden from the surrounding landscape, with planters running alongside for plants to grow over the timber for a truly rustic feel. The landscaping includes lots of the sandstone and flint rock that were taken from the plot’s original cottage. We wanted to use the stone as a reminder of what used to be there. This looks great around the house and we are now constructing a small wall around the garden with the remaining sandstone.”

The self-build is situated in a beautiful location to compliment, however, the Aberdeenshire landscape can be incredibly windy and cold, so this greatly affected their plant specification. The Quinlans wanted a garden that made use of the beautiful Scottish vista at the same time as paying homage to what was previously there, and that it certainly does.

The Green Homes Network suggested that Russell and Janice should hold an open day so that other aspiring self-builders can be inspired by what the Quinlans have created. “The responses have been very good. A lot of local people love the property and the open day welcomed over 80 visitors!

“The important thing to remember is to thoroughly research the supplier of the house and make sure the example you view is unbiased,” advises Russell. “Unfortunately the property we looked at was the supplier’s own house.

My advice to those looking to create their self-build’s garden is to remember that it’s really down to personal choice! The work done to convert an exterior building site to what we now have was substantial and not everyone would like it, but we think it fits in really well. Despite all the problems we had our new home is everything that had we hoped it would be – it’s brilliant!”

More in this category: Creating Eden in a small garden »
Login to post comments
back to top