From derelict to dream home 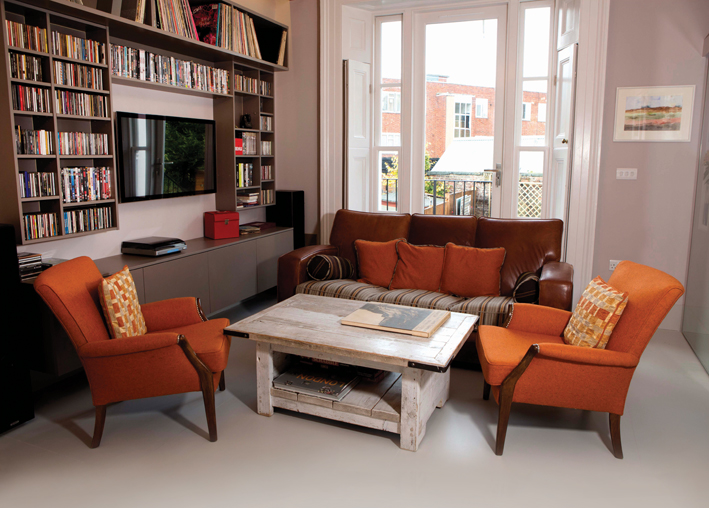 For her last ever project, serial renovator Suzanne Noble has transformed a dated hovel – that once belonged to a great public icon – into a luxury London dwelling.

With her children heading off to university, Suzanne Noble was on the look out for an unmodernised London property to gut and transform into the home of her dreams. When she came across a dilapidated South Hampsted maisonette on a property website she rang the agent immediately. The flat previously had an illustrious owner, Yogi Mayer MBE. Having fled Nazi Berlin with his young family in 1939, he went on to lead the Primrose youth club, whose members were survivors of Nazi concentration camps. He mentored and encouraged “the boys”, as they became known, to build new lives for themselves in Britain. His drive and enthusiasm to help others throughout his life made him a hugely appreciated member of the community in which he lived. However, after his death aged 99, having lived in the property for 50 years, the flat was left in a very sorry state, riddled with damp and very dated – exactly what Suzanne was looking for! Within a week of seeing the property it was hers.

Having renovated several times before, this was Suzanne’s fourth major project. “I guess you could say I’m a serial renovator,” begins Suzanne. “I love the challenge of putting my own stamp on a property rather than buying a place that has been created according to someone else’s taste. I feel more comfortable in a home that I’ve renovated. I don’t think I have extreme tastes, but I like things the way I like them.”

Suzanne’s architect, Simon Miller, came up with four schemes for her new home. “After living in a large, family house for 20 years, I really wanted this –my last project – to be my flat as opposed to a family home. The design I picked is centered around my needs, with an open plan dressing room, huge bathtub at the end of my bed and a large open plan kitchen/living room that’s perfect for dinner parties. I picked it because it was the most selfish design! As a single woman with a couple of boys that come and go from university, it just made the most sense.”

After waiting three months for planning permission to be finalised, Suzanne’s project could begin, with a project length of six months, however, the ever-reliable British weather had alternative plans. “The weather was so cold that the builders had to stop work on the extension because the ground was too frozen!” continues Suzanne. “As a lower storey maisonette, I was also worried about disturbing the tenants that lived upstairs, especially as the steel work required was pretty major. Thankfully the builders managed to get the massive steel beams in without creating any major disturbance.” The project only ran over by three months, although as a result Suzanne ended up moving four times in nine months – “not advisable!”.

Suzanne left most of the material and product specification to Simon as, having worked with her on a previous renovation, he knew her tastes well. “I worked with Simon Miller when I brought an abandoned electroplating factory that I wanted to convert into an office for my PR agency. It was a very big job and his first commercial project. I pretty much left him to get on with it and the result was spectacular! So when I saw the flat I knew I wanted to use Simon again.”

She also worked with interior designer Kelly Fannon who was instrumental in the lighting plan and colour scheme. “I met Kelly when I advertised on a message board,” she explains. “It wasn’t the usual approach, but it worked and we got on very well.”

The end result is an inspirational renovation that has almost doubled the property’s value. The home now boasts three double bedrooms, three bathrooms, an open plan dressing room, large living space and dedicated laundry room; it really is the gloriously selfish design that Suzanne had wished for. The team have utilised every square metre of this small slice of London and transformed it into a £1.2mil home.

“I did end up going £20k over budget due to aesthetics,” admits Suzanne. “I chose a more expensive porcelain floor for the ground level, added extra windows and doors, additional kitchen units, as well as a more expensive worktop and splash back. But looking back there’s nothing I would have done differently!”

The flat features a large open plan kitchen and sitting room with units designed by Schüller. The space embodies soft, neutral tones with colourful statements. The structural steel frame remains exposed and painted a vibrant red, which is a contrast to the chalky distressed wooden kitchen cupboards and grey stained doors. This theme of neutral colours with eye-catching features runs throughout the renovation in a feminine palette of pale pastels and warm statement hues.

“We like the expressed red structure on the Upper Ground Floor, it is unapologetic but respects the traces of the original building,” explains Suzanne’s architect Simon Miller. “We also like the glass sliding door at the top of the staircase that allows borrowed light from the side of the house and the peak window by the glass door. The general material palette works wonderfully with both the natural and artificial lighting.” As the upper ground floor benefits from direct east and west sunlight, the way light flows through the old London maisonette was integral to the product specification. Suzanne’s want for a sensorial prominence in her new luxury pad is achieved through the indulgent elements of the interior design, from the ability to walk barefoot on porcelain thanks to the underfloor heating, to gazing upon the beautiful free-standing bath from the comfort of her bed.

“I love the open plan kitchen and living room,” beams Suzanne. “I work from home and it’s a very relaxing peaceful space. There is a Sonos stereo throughout the room and I adore turning it on first thing in the morning and listening to jazz vocals all day long – bliss! My boys say that the kitchen reminds them of Shoreditch House, where I occasionally go and I like the eclectic, traditional mixed with modern feel of their clubs.” “I think this is my last renovation,” concludes Suzanne. “I don’t see myself moving again as the property is everything I hoped it would be, and more! The boys each have a decent sized bedroom and their mum has a wonderful living space.”

More in this category: Innovation on many levels »
Login to post comments
back to top