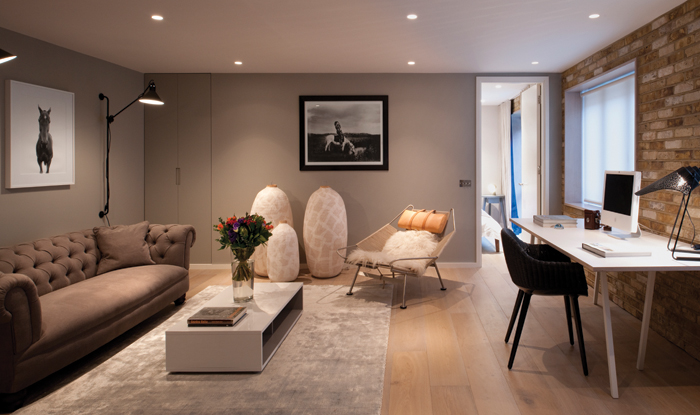 Stylish shades of grey are the perfect backdrop for professional photographer Mike Penn’s work in his stylish mews renovation.

Successful London photographer Mike Penn is no stranger to refurbishment projects, with his stunning new London Fitzrovia mews house being his third. Hidden neatly from the hustle and bustle of central London, the complete renovation of a 1970s office space has resulted in a sleek urban masterpiece.

“I was out with friends one night and we were in Charlotte Street and I just thought, ‘This has got such a great vibe’,” explains Mike. “So having decided that I wanted to live in this area, when a search agent pointed out this mews house that was previously used as an office, I loved the feel of it and the challenge of changing it into a home.”

Mews houses are mostly the annexes of large Pre-Victorian buildings located in the heart of aspirational areas of the city. The original mews house in this fashionable Fitzrovia location was demolished in 1970 and replaced with a three-storey terraced mews-inspired office building.

Mike oversaw and ran his first two renovation projects, but this time he felt the project deserved an architect and designer. After being recommended by a friend, Mike asked Thomas Griem – the mind behind interior architecture practice TG-Studio – to transform the building into his London home and studio office.

“What I wanted was a creative living space,” continues Mike. “Everything needed to be ripped out and I saw it as an opportunity to have something that was a fantastic, adaptable, urban, cool living space. I wanted the building to feel like a New York loft inside and an old loft building externally. I didn’t see why I had to have a normal three-bedroom house!”

“Mike wanted a New York loft in this London mews, so opening up the space as much as possible was very important,” says the project’s Interior Architect Thomas Griem.

After four sessions with Thomas thoroughly exploring projects similar to Mike’s vision, they finalised the brief and Thomas produced hand sketches of all areas and material samples so that Mike could clearly see how his new home was to come together.

As there was no space for extension, the 1800ft2 interior layout has been completed restructured. The house was stripped down to its structural walls and roof, and reinstated as a new modern home. All of the external walls and roof have been insulated and all windows and doors have been replaced. Some of the windows were extended to the floor with external Juliet balconies. Other major work included the ripping out of existing staircases and replacing with a more practical space-saving staircase built into a corner of the mews.

“Mike wanted a lateral living space and to get round building regulations requiring fire wall and doors we introduced a state of the art misting system that enables a safe environment without creating any corridors,” explains Thomas. “Another building regulation we overcame was the need for insulation. Mike liked the idea of keeping areas of open brickwork, so we had a layer of insulation added and then covered with authentically weathered brick slips that are only an inch thick. This meant that we achieved the desired look without losing valuable space.”

The first floor is the open-plan entertaining space that Mike wanted, comprising kitchen, dining and living areas. Oak floorboards continue up the end wall and finish at a lighting feature which adds the illusion of height. Two of the windows were replaced by French doors and a window casing out of solid oak has been fitted to emphasise the new thickness and solidity of the external walls. The innovative exposed brickwork along the window wall is now a statement feature.

A gentle grey palette flows throughout which works as the perfect backdrop for the artist’s photography. “There is something just too monochrome about photography on a white wall,” says Mike. “I think this light shade of grey is perfect for showing photography.”

The smart shades of grey are complemented by bold colourful statements. For example, alongside the beige L-shaped sofa are two translucent coffee tables and two vintage chairs upholstered in soft turquoise together with a vivid apple green gloss TV stand.

The Doca kitchen has a joinery feel and features a new matt tactile gum finish. The worktop is sandblasted granite and the splash back is TG Studio’s signature arabascato marble. TG Studio were responsible for the complete furnishings of the contemporary property, where New York retro meets luxurious Fitzrovia in bespoke designs created for Mike, such as the TV unit in the living space and master bed on the second floor.

A large walk-in wardrobe and spacious bedroom have been achieved on the second floor. Clever layout design under the sloping roof allows for a 5m walk-in wardrobe and shelving. Intelligent use of mirrors emphasizes the sleek design and enlarges the restricted space. Traditional beveled white tiles have been mixed with a lavish arabascato marble, matt black lacquer and grey basalt stone alongside more exposed brickwork. The bathroom fittings are of traditional English design which complement the freestanding bath.

The ground floor is divided into two spaces, where Mike now has a personal studio/office space lined with built in cupboards and a guest bedroom with its own en-suite and cloakroom.

The project was completed in a swift six months and came to a total of £480,000, which excludes the £2m that Mike paid for the sought-after mews. “The speedy conclusion was due to the efficiency of the contractor, Mike’s decisiveness and good old fashioned planning!” continues Thomas. “It is well worth spending a couple of weeks getting a schedule sorted out for everything before commencing the actual work.”

Mike is extremely happy with deciding to work with an architect and designer for the first time on this, his third renovation: “The process was extremely smooth and easy for me. The finished space is everything that I hoped it would be, especially the open plan living space on the first floor and the light that floods all the rooms. The local community love Warren Mews and neighbours have even started to copy its facade and window colouring! If budget allows, I would advise anybody looking to renovate to work with an interior designer as well as a good architect.”

More in this category: « Interior inspiration Deeper underground »
Login to post comments
back to top