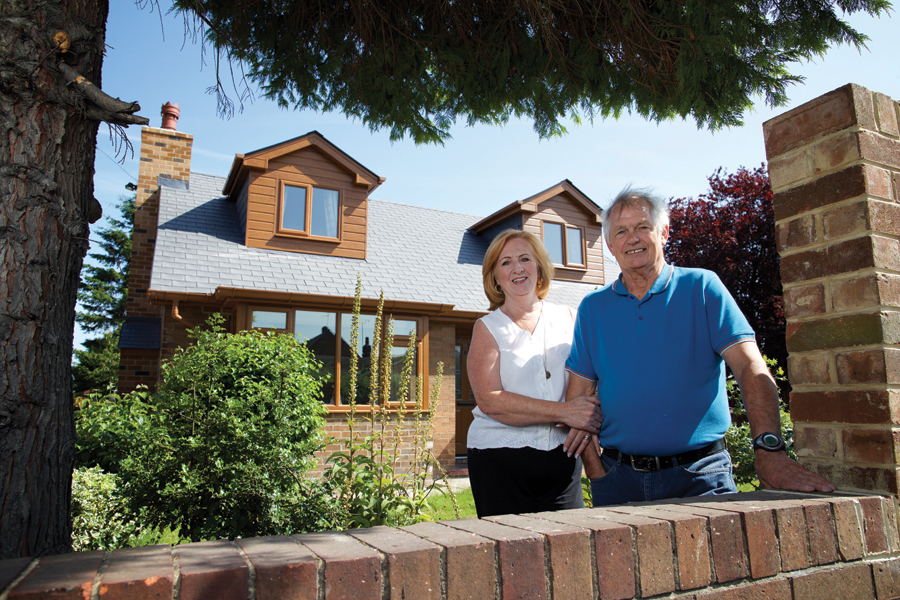 70-year-old Colin Clarkson has transformed a rundown two-bedroom 1960s bungalow into a modern four-bedroom property with a spacious extension.

With no initial plans to pursue his own project, it was merely circumstance that led to Colin Clarkson’s home building adventure, as he explains: “Initially we just wanted to downsize. We were living in a high maintenance four-bedroom property with 2.5 acres of garden in Scalby, Yorkshire. We wanted to live in a bungalow near Leeds. When we started looking, everything on the market looked very expensive for what it was. We didn’t want to pay more than the stamp duty threshold of £250,000, so we started to look at the cheaper properties that could be re-modelled.”

Colin came across an early 1960s two-bedroom brick and block bungalow with a conservatory that had been owned by the same family since 1968 and was in a state of disrepair. It was within Colin’s budget at £240,000 and he instantly recognised its potential. The bungalow had been on the market for two years and the owners desperately needed to sell in order to finance the nursing home fees of the lady who’d lived there. Colin put an offer in well below the asking price and it was accepted.

The idea was to convert the property into a four-bedroom home. Colin planned to demolish the existing extensions and instead add a large, modern extension at the property’s rear. He explains: “I went into the roof space and it was like city hall – enormous. You could have had a barn dance up there! So I could see that I could make the building into a dormer bungalow – the cottage type with pitched roofs because planning wouldn’t have accepted a big dormer with a flat roof at the front.”

Having previously worked as a housing gas surveyor for Hull City Council and designing heating systems for British Gas, Colin knew how to use scale rules and drawing boards. So he set about working on the drawings for his new home, later bringing in an architect to get through the planning procedures. The original plan was for his son-in-law to become project manager as he works as a builder. However, he had too much work going on so Colin decided to project manage himself. “It really opened my eyes to the British building industry,” says Colin.

Disaster struck when Colin had a heart attack two weeks before Christmas and just as the project was getting going. However, he made a quick recovery and the programme was only put back by about three weeks. The project was completed by mid-June and Colin and his wife moved into the property in July.

Budgeting was another complication for the project. After originally budgeting for £75,000, they ended up spending £110,000 due to extra features. Underfloor heating was a bigger expense than expected, costing around £12,000 because the timber floor was ripped out and the 18-inch void filled with hardcore, stone and screed.

On the topic of project budgeting, Colin says: “I used a lot of materials from Eurocell. I went into their local branch because I’d been told they sold Tapco slate tiles. Andy Dawson – Wakefield Area Manager for Eurocell – gave me a price and said if anyone meets that price to go back to him and he’d see what could be done. I came up with a list of building products and he came back with reasonable prices. When I was there I saw the Skypod skylights and I wanted them – I had a conservatory before and knew this would sort the problem of freezing in winter and boiling in summer – so this was another unexpected expense.”

The new home is spacious, yet comfortable. It consists of mainly products either made by Eurocell or exclusive to Eurocell. These include Charsworth entrance doors at the front and the back from The Dales Collection range of composite doors, PVC-U windows and patio doors from a Eurocell fabricator using the Eurologik profile. Other products bought from Eurocell include fascia, soffits, guttering and downpipes, Roomline internal PVC-U skirting boards and all the underground drainage.

The Clarksons love their new home, as Colin comments: “It’s everything we hoped it would be and we feel very comfortable here. I can see me spending the rest of my days here. There’s very little maintenance needed so I can just potter about. My favourite space is the extension at the back where we have the kitchen-dining area and lounge. It’s a great communal area and we spend most of our time in there during the day – that's where the Skypods come in. I haven't really envisaged the garden yet so it’s all just laid to lawn. I could see the potential of the house but nothing’s knocking on my head yet about the garden.

“We put so much work into it and now it’s just how we want it, lovely and quiet. There is nothing I would have done differently. At 70, I won’t be doing it again, but I would project manage it a different way – it’s the biggest project I’ve ever attemped. My advice to others would be to double your budget.”

More in this category: « Can a house really be made out of straw? Lighten the load »
Login to post comments
back to top