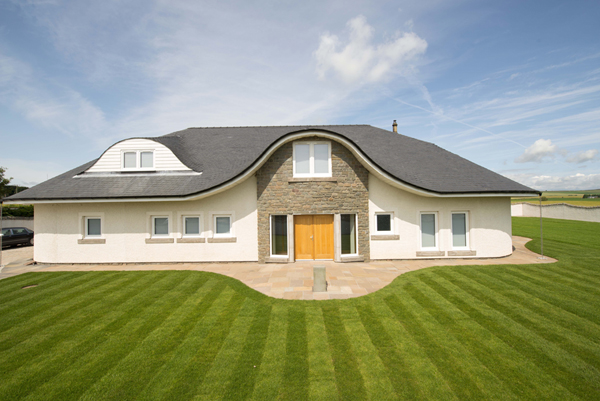 With a very particular set of design challenges, experienced building professional David Maxwell tested the flexibility and craftsmanship of materials in his own self-build venture.

Five years ago David Maxwell, Managing Director of George Martin Builders Ltd, set out to build a perfect retreat in the Scottish countryside. Having spent his entire working career building other people’s homes, the time was right to make his mark and build his own unique home.

“I’ve always wanted to build my own home and knew that if I could, I would do it differently,” explains David. “My whole career has been building homes for other people and following other people’s design briefs and specifications, but this time would be different.”

David found his perfect plot just outside Dundee that was both in a small rural community with beautiful views and just half a mile from the motorway. The design, completed by Fraser Middleton, Director at ARKTX, Chartered Architects was approved and received planning permission within a few months of application. By this time David was well on his way to realising his dream, taking two of the most notoriously difficult parts of self-building within his stride.

The build of David’s four bedroom, four bathroom, 500m² house was not however without delay or hiccup. With all his experience, David knew that the build could have been completed within 18 months, but instead it took five years. This was because, like so many self-builders, David was fitting the project around his other work. Although from the outset no specific timeframe was planned, the prolonged build time could have been a problem had David’s circumstances been different. As it was, David and his wife were secure in their 30-year family home and were under no pressure to move or sell to fund the build.

“As a builder with 40 years' experience, and an honest man who calls it as he sees it, there seemed to be a lot of square boxes around in the current housing market. So, wanting a change as much as wanting to build to my own taste, I set out to build a wonderfully different curved country cottage,” explains David.

“But with curves come problems. With such an unorthodox design you inevitably end up asking a lot of tradesmen and manufacturers to create and work to bespoke standards, which can quickly become expensive if you’re not careful. Agreeing timescales and knowing how trades work together is vital if you want to keep bespoke designs on budget.

“One such example was the rainwater systems. Whilst sweeping curves make a beautiful roofline, they are somewhat of a challenge when it comes to guttering - in particular, to accommodate the front entrance, there is even a section of guttering with a positive gradient. I turned to a manufacturer that I knew and trusted, Alutec.

“Finding a manufacturer who is willing to partner with you on a project is a real advantage, Alutec were very much part of the process and went on a journey with me, helping with the design and specification.”

David’s house also presented unique challenges because of its location. With extreme weather sometimes experienced in the region, particularly that of heavy snowfall, the envelope of the building needed to be strong and hardwearing. Again the guttering was a major hurdle as it had to withstand not only heavy snowdrifts sitting on top of it, but also huge amounts of surface run off during the thawing period. PVC systems would not have coped with the weight, whilst cast iron is both expensive to install and maintain because of its susceptibility to corrosion. Alutec’s aluminium Evolve system however, provided a perfect solution. Made from marine grade aluminium, the system is impervious to corrosion and strong enough to withstand the weather, in addition to being virtually maintenance free for its entire lifespan – which, in normal atmospheric conditions, can be 50 years or more.

“From the outset I wanted to build a property that would not just last but thrive in the Scottish climate, but being a detached, 500m2 dwelling I knew this would not be easy,” continues David.

Exposed to the elements, insulation was key. The walls have been built 600mm thick and to passive house standards, with 140mm thick roof insulation and fitted triple-glazed windows throughout. The result is that the entire house’s heating can be run off a 22kw biomass boiler, which is astonishing given the size of the house, as an average three to four bedroom house would have a gas combi-boiler of around 30kw.

Throughout the build David was mindful that he wanted his house to last but not to have a large impact upon the environment. The biomass boiler installed provides carbon neutral heating whilst the solar thermal panels David had fitted provide an additional 11.3kw of hot water on a sunny day.

Reflecting on the result

“The physical impact of the house was important to us, but so was the look. There is no denying that it is quite a large house but the design and the curves have really helped to settle it into the landscape. The rolling hills are mirrored in the house and because we sunk it into the ground, all you see from the road is the sweeping roofline. That being said, there has been a mixed response from neighbours with some loving it and others finding it difficult to see past its unorthodoxy,” says David.

“It is difficult to pull out a favourite feature within the build because all of it is what I wanted – which is the beauty of self-build – but if I had to pick out one part it would probably be the stone staircase, followed closely by the through fireplace.

“I feel the real test has been the transition between our old house and this one. My wife and I had been settled in our home for 30 years and even during the build my wife didn’t feel the draw to leave. But now we are in we do not miss our old house in the slightest. There is a comfort here not just from the super efficient and high quality materials, but also from the knowledge that this is what we want, to the letter, no compromise.

“I’m thrilled with our new home and I’m also thrilled that it came in on budget. It might have taken a little longer than we had hoped for but, in my experience, this is always the way for self-builds.”.

Offering a final few words of advice to self-builders, David concludes: “If you’re going to manage a project yourself then sequencing effectively is going to be paramount. Learn how trades fit in with one another and if you can, pick the brain of an experienced builder. This way, when delays happen on site, and they will, you can minimise wasted time by organising effective interim work. Knowing how things fit together will also do wonders for lowering your stress levels, allowing you to see the bigger picture.”

More in this category: « Geometric suntrap Trials and tribulations »
Login to post comments
back to top