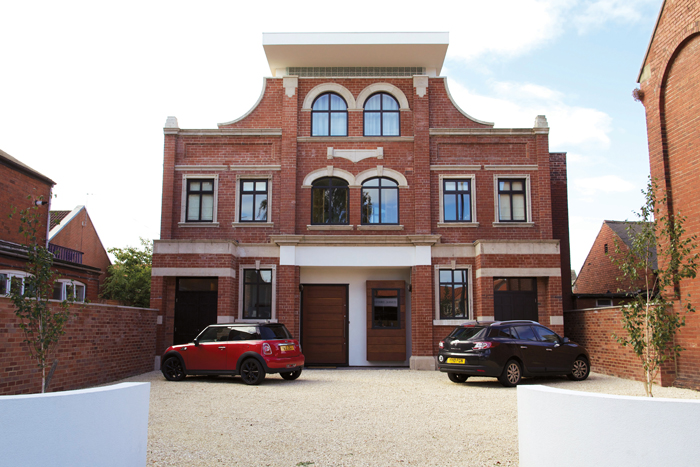 The ap Harri family wanted a home with a bigger garden and ended up with a breathtaking converted Art Deco cinema.

In many ways this project is about connecting the building with its past. The unique Thorne building has had many names and uses since it was opened as the 900-seat Kensington Palace in 1927, but was eventually abandoned in 1998 and left to dilapidate.

“We’d been looking for a house with a bigger garden and a bit more room, but all we could find were overpriced houses that we’d want to gut and redecorate,” explains Software developer Gwyn ap Harri. “We really fancied building our own home, but loved living in Thorne. At some point, we noticed that this seemingly abandoned, boarded up nightclub was for sale. It was a dump, a massive building falling apart, paint peeling, even trees growing out of the walls! An eyesore if ever there was one. It was up for sale for £195,000, but when we enquired, we were told the owners would accept far less.”

Gwyn, wife Kate and boys Jac (8) and Dylan (6) were ideally looking for a plot, so had hoped to demolish the existing building as there was plenty of room for a large town house with a spacious garden. However, the plot was in a Conservation area, meaning that they would not be allowed to knock down the existing building.

He continues: “I couldn’t understand this because it’s not a listed building or anything, so I decided to go and see them with my big list of questions. They told me in no uncertain terms that I wouldn’t get planning permission to knock it down, that it used to be a cinema built in the 1920s and therefore historically significant, that if I bought it I was legally obliged to maintain it so it didn’t fall down, and that if I just knocked it down, they would take me to court and I actually could be ordered to rebuild it.

“That night my wife Kate and I were talking about it, and I just couldn’t understand what was even vaguely nice about the building. So we “googled” it, and that’s when we found the picture of the Old Kensington Picture House. Looking at it in a new light, we thought that if we restored the front, perhaps we could pull down the auditorium at the back, as looking at the building, it looked like two separate bits stuck together. When we met with the planning department for the second time with this new plan, their reaction was completely different and we decided to go for it.”

A professional valuation stated that the abandoned property was worth £80,000 and the surveyor quoted £60,000 for the demolition alone. With the property going to auction the family placed their bid with no competition, however this didn’t meet the owners reserve so – much to the family's frustration – the old cinema remained unsold.

Before leaving the auction house Gwyn decided to register his interest with the owners, but they rejected his higher offer of £86,000. After some time the agent rang him to let him know that a higher offer had been placed and if he would consider going higher, but aware of how much the cinema was worth, Gwyn refused to budge. A month later the agent rang again asking him to push to £90,000. Gwyn and Kate deliberated and came to the conclusion that the building’s potential was so abundant that they would regret walking away from the opportunity. The following day contracts were signed and the Art Deco cinema was theirs.

The young family took a massive risk in buying a building without planning permission, but, with determination and enthusiasm pushing them forward, they knew something special was about to commence.

With the design finalised, the ap Harris expected planning permission to be granted within eight weeks, but instead faced a long five months of frustration. The complications originated from the Highway Department, who rejected any vehicular access to the front of the building. After experiencing what seemed to be a disappointing lack in decision urgency, they were finally granted planning permission and their dream-build could get underway.

“Because we decided not to dig trial pits until the demolition started we had to rethink our plans as knew this would affect the structural design,” continues Gwyn. Trial pits are an excavation of the ground in order to study the composition and structure of the subsurface and are an essential part of site investigation. “On top of this we found the original ‘measured survey’ was way out in some parts – they had assumed that the walls were straight and parallel, which they aren’t – costing me further time and money.”

Demolition finally started in November 2011, crashing through the original projector room and – much to Gwyn’s heartache – the stunning original Terrazzo floor. Stairs and internal walls were all ripped out, along with the apex roof of the auditorium, stage and gallery seating footings. Paint was removed perfectly from the original building front by a sand blaster revealing the original red brick.

After a bout of bad winter weather caused a few months of setback, footings were dug, drainpipes installed and concrete poured, forming the ground floor. The underside of the ceiling was created with formwork and plywood, then strengthened with rebar – a mesh of steel wires used as a tension device to hold concrete in compression. Internal plaster was removed unveiling roots that extended three metres into the room, breaking through the brickwork and plaster, some even spreading under the screed on the floor. The build continued and started to form what was soon to become a unique homage to heritage and hard work.

A crucial part of the journey was improving the building’s thermal performance to modern standards without making its footprint substantially bigger. The use of Knauf Aquapanel Exterior combined the benefits of a dry panel system with the strength of brick and block and, because it consists of aggregated Portland cement with coated glass fibre mesh embedded in back and front surfaces, provided the ideal key for render.

In effect, builder Richard Wilson of Wilsons Construction and his staff retro-fitted a timber-frame to the external skin of the building, creating a cavity between the wall and sheathing which was filled with insulating material. Aquapanel Exterior was then fitted onto the sheathing board via timber battens in the timber frame studs and then rendered to create a seamless decorative finish.

Broken lintels on the facade were restored, windows installed and the roof and terraces – made out of timber, plywood and insulation – sprayed with a layer of plastic. Once the cladding was on and balustrades installed the scaffolding finally came down exposing the conversion in its full glory.

“It’s been a long haul,” says Gwyn. “So many ups and downs even if there’s not been much at all that’s gone ‘wrong’. It’s just been the pressure of trying to make the right decisions, when a lot of the decisions wouldn’t be deemed ‘normal’. It’s not a normal house, and we’ve never ever done anything like this before.

“All we’ve done is engage in the design process, and say what we like and don’t like, trusting the outcome will be amazing rather than ordinary. And now, our bravery has paid off. When we see people stopping to have a look at our house – it’s either because it’s a monstrosity or it’s beautiful – and no-one’s told us they don’t like it! On the contrary, people have been so kind, and we certainly think it looks lovely.

“We’ve chosen to work with people we trust, either because they’re friends or have been recommended. Hardly anyone has let us down and if things didn’t go quite right, they were there to make right. You can never really decide that something is right until you can see it, and that’s quite hard when building a house as it’s very sequential. We’ve tried to be flexible and deciding things just as we needed to has really worked for us.

“We have chosen a minimalist look, which I like to call simplicity. Some things may be considered traditional, others modern, but for me, it’s simplicity. We have used a small palette of materials throughout the house and it pulls everything together.”

The ap Harris chose to use local suppliers and craftsmen whose continuous advice helped them to make the right decisions during the build. The build was by no means straight-forward and the skilled team, from labourers to architect, took on the complicated project and produced something marvellous.

This unique self-build journey of transforming a derelict shell into a stunning contemporary masterpiece featured in the latest series of Channel 4’s Grand Designs.

More in this category: « Starting from scratch Radical restructure »
Login to post comments
back to top